Donald Trump ‘up to 13 points behind in battleground states’

New poll puts Donald Trump as much as 13 points behind in battleground states of Pennsylvania, Michigan and Minnesota – which some aides thought he could flip

Donald Trump is trailing behind Joe Biden in three key battleground states less than four months ahead of the general election, a poll released Friday revealed.

The Fox News poll showed that the presumed Democratic candidate is besting Trump in Pennsylvania and Michigan, swing states that went red in 2016, and Minnesota, which Hillary Clinton won last time around.

The president is also behind Biden by a whopping 13 percentage points in Minnesota, which shows he only has 38 per cent of the vote in a head-to-head matchup with Biden.

In Pennsylvania, Biden holds 50 per cent support from registered voters there, which is 11 points more than Trump.

Trump’s campaign had faith he could make up ground since the last round of polling in April, which also showed him losing to Biden in these battleground states.

Hogan Gidley, once the Trump White House deputy press secretary, dismissed the polling as fake, claiming that Democrats are disproportionately surveyed and included in the results.

‘You touched on some polls. Most of those are fake, I’ll be honest. They oversample Democrats,’ Gildey, now Trump’s campaign press secretary, said during an interview with Fox & Friends Friday morning, deflecting toward the ‘enthusiasm’ and ‘excitement’ Trump supporters exhibit.

Donald Trump is trailing Joe Biden by as much as 13 points in Pennsylvania, Michigan and Minnesota – three 2016 close-call battleground states 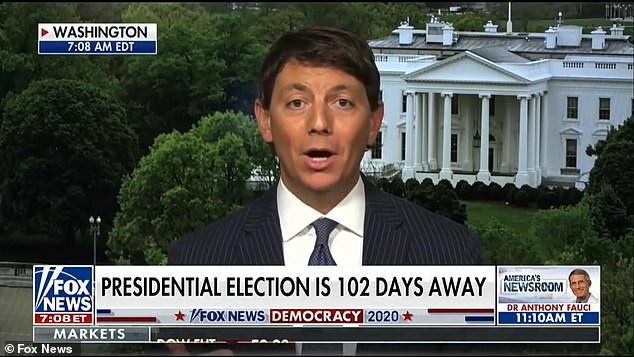 Trump’s campaign press secretary Hogan Gidley pushed back against the results during an interview with Fox News Friday morning, claiming they are ‘fake’ and that ‘enthusiasm’ for the president is present 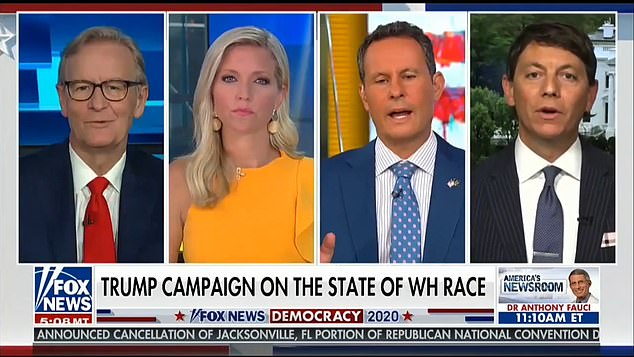 ‘We have the momentum,’ he continued. ‘We know we’re going to do well in November.’

Fox & Friends co-host Brian Kilmeade pushed back on Gidley’s claims, demanding he not call his colleagues and the work they do ‘fake.’

‘I just want to say, I know the people that do the polls. They’re not – they don’t do a fake,’ Kilmeade said.

‘They do a really good job,’ the Fox News morning show host continued. ‘They might not be accurate in the end – I don’t know – but they do a great job.’

Of the 756 Michigan voters, 776 Minnesota voters and 793 Pennsylvania voters, the pollsters did not reveal the party split among those surveyed.

The poll, however, does have a margin of error of plus or minus 3.5 percentage points.

In April, Fox News also conducted a survey on Biden versus Trump support among registered voters in swing states Michigan and Pennsylvania.

The results from April until July were marginally different, at best.

Trump won by less than 1 per cent in Pennsylvania in 2016 and by only .3 per cent in Michigan.

Clinton bested him in Minnesota by 1.5 per cent.