Donald Trump said Monday that he will present ‘solutions’ in a police reform executive order he will unveil on Tuesday, as reports reveal it will address systemic racism rooted in law enforcement.

‘The main thing important to us is to address the public’s concern about aggressive policing, but not tie the hands of officers in the field keeping communities safe,’ a White House official told DailyMail.com.

Trump told reporters during a roundtable on ‘Fighting for America’s Seniors’ that he would ‘save’ revealing all the details of the executive order for a Rose Garden event on Tuesday where he will be joined by Attorney General Bill Barr.

‘We’re going to have some solutions,’ he said, adding: ‘We need some great people in our police department.’

He also called the death in Atlanta on Friday of Rayshard Brooks ‘a terrible situation’ and ‘very disturbing,’ indicating he had seen the video of the black man being shot in the back by a white police officer. Officer Garrett Rolfe, who pulled the trigger, was fired but has not been charged.

The president also said he spoke with several groups, including sheriffs and families who have been affected by police brutality, when drafting the executive order.

The president didn’t seem too optimistic about Congress passing anything on the matter, despite Democrats presenting a sweeping police reform bill last week. 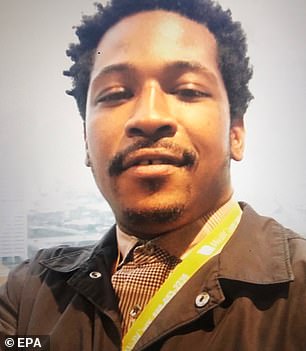 Rayshard Brooks was shot dead on Friday June 12 after police were called to the Wendy’s on University Avenue, Atlant.

But a White House official told DailyMail.com that saying it addresses ‘systemic racism’ is Merritt’s opinion, asserting that neither the word ‘systemic’ or ‘racism’ is included in the text of the order.

‘Having seen the text, it in no place uses the word systemic or racism,’ the official said.

Trump will separately and privately meet with black families who have been affected by police violence on Tuesday.

Merritt helped connect the president with the families.

‘The overall goal is we want law and order,’ Trump told reporters of the order at the White House Monday as he continues to dub himself the ‘law and order president.’

The executive order will come more than three days weeks after George Floyd died in Minneapolis while in police custody after a white cop, Derek Chauvin, held his knee on the back of the victim’s neck for more than eight minutes.

The incident, which went viral thanks to a bystander taking video, sparked nationwide unrest and led to weeks or rioting, looting, arson, protests and other demonstrations regarding race and black communities’ relationship with law enforcement.

It has also ignited a movement by far-left factions of the party calling for the defunding and dismemberment of police departments across the U.S.

However in the Senate, are on the brink of introducing an extensive package of policing changes with new restrictions on police chokeholds and other practices as Congress rushes to respond. 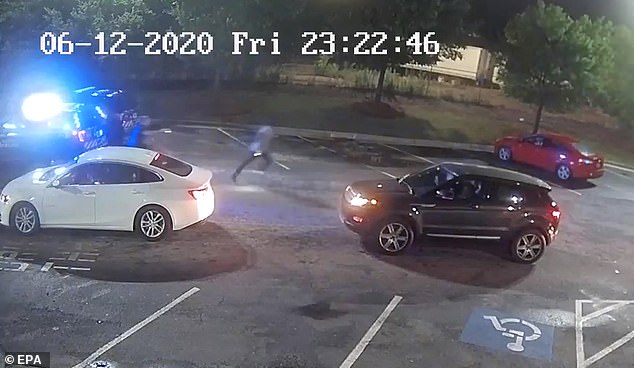 Brooks was running from the cop when he turned, pointed the Taser gun, and was shot dead 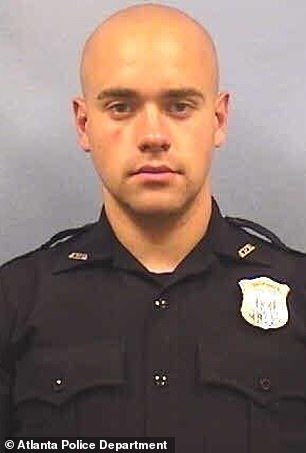 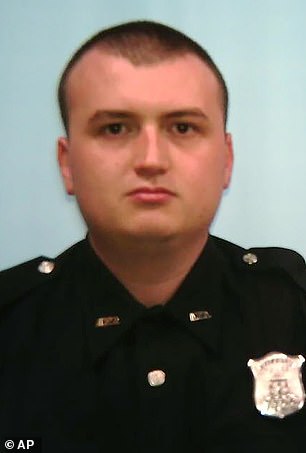 Officer Garrett Rolfe (left), who pulled the trigger, was fired but has not been charged. Prosecutors say he may be charged as soon as Wednesday. Devin Brosnan (right) has been placed on administrative leave. Brosnan watched as Brooks overshot the parking space into which he pulled.

While the emerging GOP package isn’t as extensive as the sweeping Democratic proposal, which is headed for a House vote next week, it is perhaps the most far-reaching proposed changes to policing procedures from the party long aligned with a ‘law and order’ approach. Confronted with a groundswell of public unrest over police violence, in cities large and small nationwide, even the most conservative senators are joining the effort.

Sen. Tim Scott of South Carolina, the sole African American Republican in the Senate, has been crafting the package set to roll out Wednesday. He said the chokehold, in particular, ‘is a policy whose time has come and gone.’

Over the weekend, the shooting death of Rayshard Brooks by a white officer in Atlanta led to a renewed public outcry, more street protests and the police chief´s swift resignation.

‘Now is the time to seek bold and broad-scale change, not change around the margins,’ Schumer said Monday.

With the political debate fluid, it is unclear whether the parties will be able to find common ground. The proposals share many similar provisions but take different approaches to address some of the issues. Neither bill goes as far as some activists want in their push to ‘defund the police’ by fully revamping departments.

The debate is changing almost daily, complicated by the fall election, with the Senate Republican majority at risk.

McConnell, who is also up for reelection in November is backing the GOP effort after the death of Breonna Taylor when police entered her home in Lousiville.

The Senate Judiciary Committee is scheduled to consider policing issues at a hearing on Tuesday.

Central to the Republican package would be the creation of a national database of police use-of-force incidents, a way to improve transparency so law enforcement officers cannot transfer from one department to another without public oversight of their record. The Democrats have a similar provision.

The GOP bill would encourage police body cameras and include a long-stalled effort to make lynching a federal hate crime.

Additionally, the Republican package is expected to restrict the use of chokeholds by withholding certain federal funds to jurisdictions that continue to allow the practice, according to a Senate Republican unauthorized to discuss the pending bill and granted anonymity.

While chokeholds have become a symbol of police brutality – and a ban is included in the Democrats’ bill – the maneuver is already banned in many departments. Police nationwide are far more likely to kill someone by shooting.

Yet, the Republican bill does not go as far as the Democratic proposal, particularly on the the issue of ‘qualified immunity,’ which aims to enable those injured by law enforcement personnel to sue for damages.

The White House has said that is a line too far. As an alternative, Scott has suggested a ‘decertification’ process for officers involved in misconduct.

Still, Democrats signaled a willingness to look at the Republican approach for areas of common ground.

‘Nothing is a non-starter,’ said Rep. James Clyburn of South Carolina, the House’s third-ranking Democrat, on a conference call with reporters.

Democrats face criticism over activists´ calls to defund the police, and party leaders in Congress have distanced themselves from that approach. The defund movement describes a range of options, from dismantling departments to shifting policing resources to other community services. The Democratic bill does not go that far, but would instead provide grant money to departments that want to consider new ways of policing.

‘Nobody is going to defund the police,’ Clyburn said Sunday. ‘We can restructure the police forces, restructure, reimagine policing. That is what we are going to do.’

Leading civil rights groups have backed the Democratic bill but it’s unclear if the Republican proposal will be extensive enough to gain broad support.

At the same time, the large police union, the influential Fraternal Order of Police, said in a statement it is working with Congress and the White House on the proposals, having provided ‘feedback’ on the Democratic bill and ‘substantial input’ on the emerging GOP package from Scott.

The House Judiciary Committee is set to consider the Democrats’ bill on Wednesday ahead of next week’s scheduled House vote.