Donald Tusk and other EU officials have rejected Boris Johnson’s new plea to ditch the Irish backstop just hours after he wrote to the European Council president.

The British Prime Minister last night told the EU that the backstop is ‘simply unviable’ and should be replaced with a new legal commitment to avoid the return of a hard border.

But Mr Tusk said today anyone opposing the backstop without a ‘realistic’ plan was actually ‘supporting the reestablishment of a border’ because there was currently no alternative.

He wrote on Twitter: ‘The backstop is an insurance to avoid a hard border on the island of Ireland unless and until an alternative is found.

‘Those against the backstop and not proposing realistic alternatives in fact support reestablishing a border. Even if they do not admit it.’

The dismissal of Mr Johnson’s plea was expected after briefings by diplomats in European capitals suggested his ideas would receive an icy reception in Brussels.

Boris Johnson, pictured, has told the EU in a letter to European Council president Donald Tusk the Irish backstop was ‘simply unviable’ 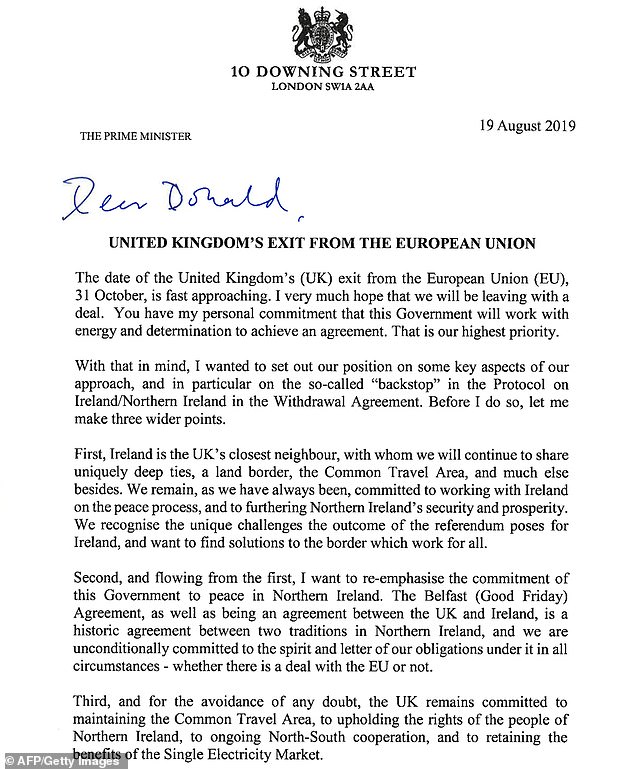 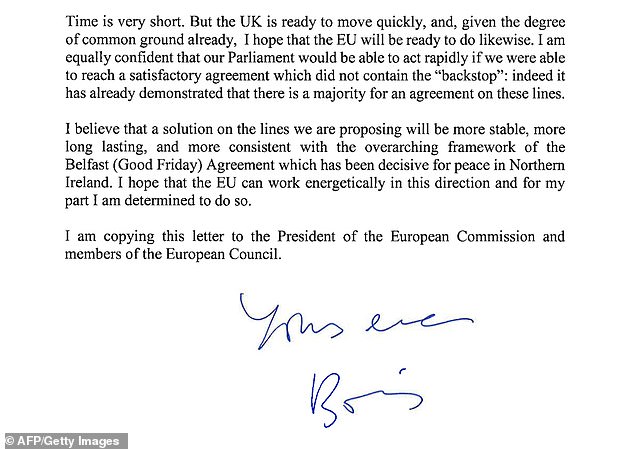 One EU diplomat told Politico: ‘It’s clear from the letter that renegotiation is the last thing the British government wants. Brexit started and ends with preservation of the Tory party.’

Meanwhile a French official told the website that Mr Johnson’s alternative plans were ‘a joke’.

Another EU source meanwhile told The Guardian that the letter ‘is a total moving of the goal posts on an issue of great importance and sensitivity that affects the lives of people on the island of Ireland’.

The response comes after Mr Johnson wrote a forthright letter to Donald Tusk, saying the backstop is ‘anti-democratic’, unsustainable as the basis for a long-term relationship and put the Good Friday Agreement at risk.

He wrote: ‘The problems with the backstop run much deeper than the simple political reality that it has three times been rejected by the House of Commons. The truth is that it is simply unviable.’

Instead, he said, Britain and the EU should commit to finding ‘alternative arrangements’ to manage the Irish border by the end of a transition period.

‘WHY THE BACKSTOP HAS TO GO’

Risks locking UK ‘indefinitely’ into customs union, puts regulatory border in Irish Sea, has no unilateral exit mechanism, applies single market rules to Northern Ireland – over which they have no say.

Not the long-term relationship we want with EU

UK intends to leave the single market and the customs union, but backstop will force country to choose between aligned to them or seeing ‘Northern Ireland gradually detached from the UK economy’.

Puts ‘historic compromise’ in Northern Ireland at risk by removing control of commercial and economic life to ‘an external body over which the people of Northern Ireland have no democratic control’.

This essentially means a technology-based solution, or the so-called ‘MaxFac’ approach, to avoid a hard border.

The Prime Minister’s letter to the EU came at the start of a crunch week for Britain’s hopes of a deal with the EU.

Mr Johnson will fly to Berlin tomorrow for dinner with Chancellor Angela Merkel, before heading to Paris for lunch with French president Emmanuel Macron on Thursday.

He will then attend a G7 summit in the French resort of Biarritz at the weekend.

Last night, he clashed with Irish leader Leo Varadkar over the backstop issue for almost an hour during a telephone call.

Mr Johnson warned the Taoiseach the Brexit deal would not get through the Commons unless it was changed. But Mr Varadkar refused, insisting the Withdrawal Agreement could be reopened.

Speaking earlier yesterday, Mr Johnson said he was ‘confident’ the EU would eventually back down, but was preparing the country for No Deal in case it did not.

‘We will be ready to come out on October 31 deal or no deal,’ he said. ‘Now of course our friends and partners on the other side of the Channel are showing a little bit of reluctance at the moment to change their position. That’s fine – I’m confident that they will.’

In his letter to Mr Tusk, Mr Johnson outlined three reasons why the backstop must be ditched if there was to be any prospect of a Brexit deal before October 31.

Firstly, he warned it was ‘anti-democratic and inconsistent with the sovereignty of the UK’ as it would lock the country ‘potentially indefinitely’ into arrangements such as a customs union with the EU, and single market laws for Northern Ireland. 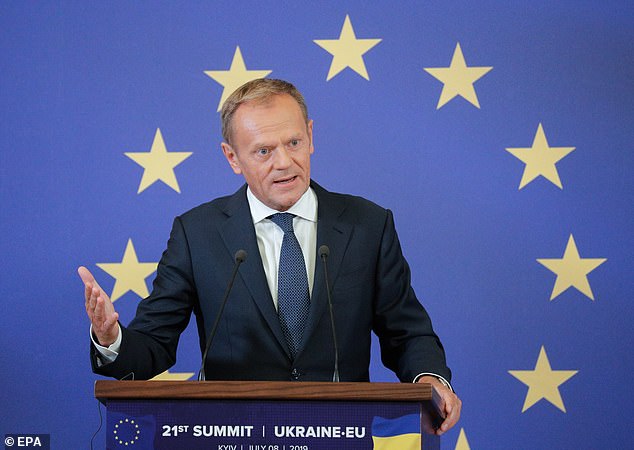 The Prime Minister told Mr Tusk, pictured, that Britain and the EU should commit to finding ‘alternative arrangements’ to manage the Irish border by the end of a transition period

Secondly, he said it was ‘inconsistent with the UK’s desired final destination for a sustainable long-term relationship with the EU’.

Thirdly, he warned that it has ‘become increasingly clear the backstop risks weakening the delicate balance embodied’ in the Good Friday Agreement.

He said that by handing control of economic regulations in Northern Ireland to an external body over which the people there had no democratic control, the agreement could be undermined.

Mr Johnson wrote: ‘For these three reasons the backstop cannot form part of an agreed Withdrawal Agreement. That is a fact we must both acknowledge.

‘I believe the task before us is to strive to find other solutions, and I believe an agreement is possible.’ 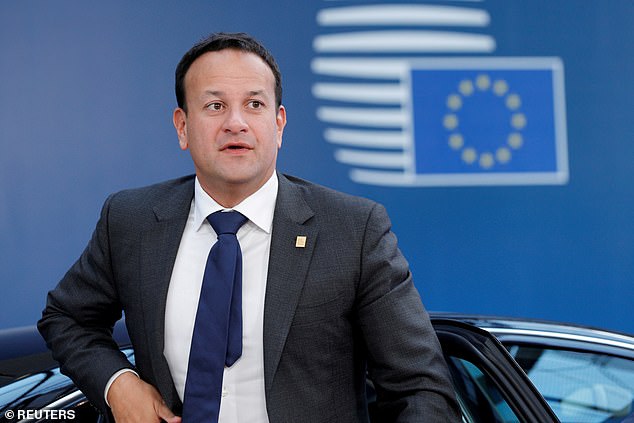 In the letter Mr Johnson warned the backstop was ‘anti-democratic and inconsistent with the sovereignty of the UK’. Pictured is Irish Prime Minister Leo Varadkar

He said both sides should commit to putting in place ‘alternative arrangements’ to avoid a hard border ‘as far as possible’ before the end of the transition period in December 2020.

Mr Johnson concluded: ‘Time is very short. But the UK is ready to move quickly and given the degree of common ground already, I hope that the EU will be ready to do likewise.’

Speaking earlier yesterday on a visit to Cornwall, Mr Johnson admitted his European counterparts were reluctant to compromise, but he believed they would.

‘In the meantime we have to get ready for a No Deal outcome,’ he said. ‘I want a deal. We’re ready to work with our friends and partners to get a deal but, if you want a good deal for the UK, you must simultaneously get ready to come out without one.’

Boris Johnson held talks on the phone with Donald Trump last night for the fourth time in four weeks. Downing Street said the PM updated the President on Brexit, as well as discussing economic issues.