The father of a 14-week-old ‘miracle baby’ died on Saturday after his body was pulled from a lake in Wigan, Greater Manchester following a canoe incident.

Mark Hill, 40, was canoeing on Amberswood Lake in Hindley on Saturday afternoon when his canoe overturned and he got into trouble in the water. Emergency services recovered his body after a search of the water.

Mr Hill leaves behind his fiancé Lisa Heavey and his 14-week old son Corey. The couple struggled to conceive and chose to have IVF treatment in their bid to have a child.

Mark Hill (pictured), 40, died on Saturday afternoon following a canoe incident at Amberswood Lake in Wigan, Greater Manchester. He leaves behind a fiancé and a 14-week old son (right) described as a ‘miracle baby’ after two failed attempts of IVF treatment

After two failed rounds of IVF, their son was born much to the delight of Mr Hill, who had ‘wanted to be a dad for 20 years’, according to his family.

Tributes poured in from his devastated family members, who praised the 40-year-old’s character and personality.

Ms Heavey said: ‘He was the most loving, kind-hearted, hard-working, gentle man. He was a doting dad.

‘Corey meant the world to him, he’s our miracle baby. Mark was the best dad he could have asked for. 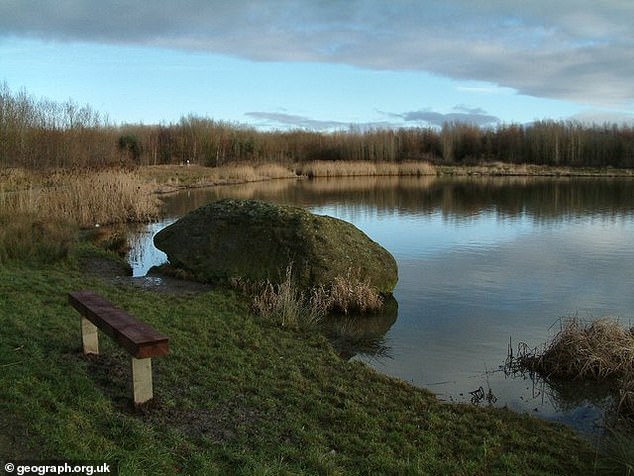 ‘We’ve been together nine years, but we’ve known each other since we were teenagers because we used to be next door neighbours.’

His sister Hannah said: ‘He was a good man. He was funny, kind, and gentle.

‘My heart is shattered into a million pieces. He has left behind so much family that love him dearly – a fiancé and 14-week-old miracle son, whom he adored so much.’

A Greater Manchester Police spokesperson said: ‘Shortly after 3.50pm on Saturday 18 July 2020, police were called to reports of concern for a man in Amberswood Lake off Liverpool Road in Wigan.

‘Emergency services attended and following a water search, sadly found the body of a man believed to be in his 40s.

‘There are not believed to be any suspicious circumstances and a file will be passed to the coroner.’