Amazon, Berkshire Hathaway and JPMorgan Chase’s decision to start their own health care program for their employees is already having impacts on the U.S. economy.

The 30-stock index’s biggest loser was UnitedHealth, one of the nation’s largest health insurance companies, which dropped more than four per cent.

The Dow Jones dropped triple digits again on Tuesday, as sellers dumped heath care stocks in the wake of Amazon, Berkshire Hathaway and JPMorgan Chase’s decision to star their own health care company. Abvove, a look at trading of the stock on Tuesday 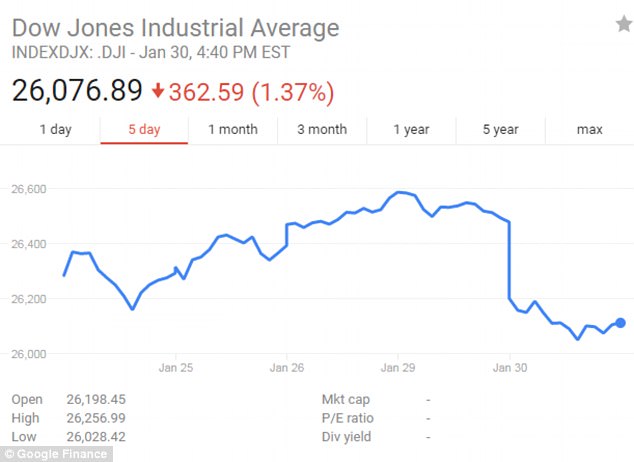 Above, a look at Dow Jones trading over the past five days. For 11 of the first 18 days of trading in 2018, the 30-stock index recorded all time highs. But now it looks to be in the beginning of a downturn

Sellers appear to be dumping the stock in the wake of the news that could disrupt the health insurance status quo in the U.S.

In their announcement on Tuesday, the three companies said they would be creating a new company to offer ‘simplified, high-quality and transparent’ health care to its employees at a lower price.

Their company could serve as a model for health care throughout the country at large, which has been plagued by ballooning costs that have legislators on both sides of the aisle struggling over a governmental solution.

On Monday, the Dow Jones fell 177 points, a drop that was attributed to rising long-term interest rates. 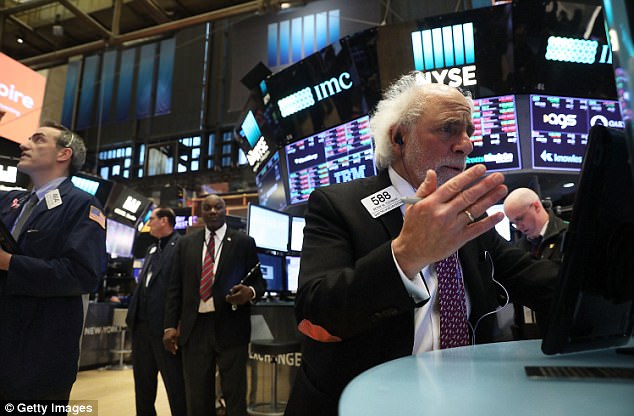 Traders work on the floor of the New York Stock Exchange (NYSE) on January 30, 2018 in New York City

Experts said not to worry too much about the continued drop.

The market has been in a strong bull market for the past year, gaining more than 25 per cent and even setting all time highs on 11 of the first 18 trading days of 2018.

A period of selling was to be expected, Gary Kaltbaum, president of the money-management firm Kaltbaum Capital Management, said, according to USA Today.

‘Markets do go down every now and then,’ Kaltbaum said. ‘And prices in the short-term, have been stretched and extended as far as we have seen in ages.’

Robert Pavlik, chief investment strategist at SlateStone Wealth, told CNBC: ‘I think people are looking for an excuse to sell. This is the first wave of selling we’ve seen in a while.’

The news will no doubt put a damper on President Trump’s State of the Union address tonight. The president is expected to take credit for the economy, which has largely been booming since he took office a year ago.