Dozens of furious TV viewers REFUSE to pay their licences

Furious viewers have cancelled their BBC licence payments in outrage at the Corporation’s decision to revoke free TV licences for 3.7million pensioners.

The BBC’s decision sparked a full-scale rebellion yesterday, as furious viewers vowed to end their payments to the corporation or even go to prison in protest at the £154.50 annual charge.

Presenter Ben Fogle offered to donate his BBC salary to a charity for the elderly to help pay their licences and a World War II veteran slammed the Corporation’s decision.

Today greater and greater numbers of people took to Twitter to share their outrage and declare they had cancelled, or would cancel, their payments. 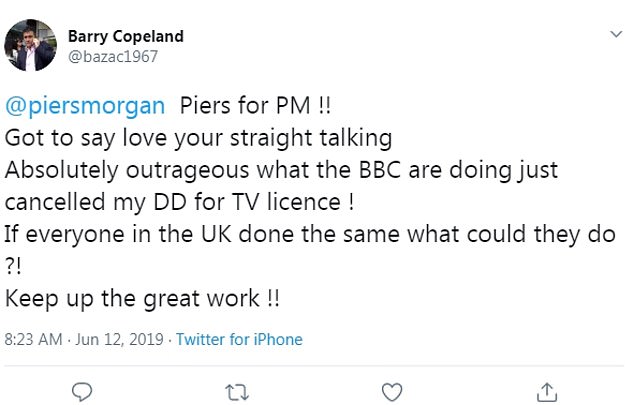 More people have taken to Twitter today to insist the BBC does not deserve their money. Since 2000 the government has provided free TV licences for the over-75s but last year made the Corporation responsible for shouldering the cost, which would be £750m after 2020

TV licences for the elderly did not used to be free, but in 2000 then-chancellor Gordon Brown said the government would foot the bill.

Obviously it does not ‘cost’ the BBC anything to ‘provide’ TV licences – the income foregone simply reduces the corporation’s turnover.

But in 2015 with government finances tight, the government said it would not continue to foot the bill beyond 2020 and gave the BBC the immediate responsibility for providing free licences, and the right to change the scheme in the future.

Viewers took to Twitter to claim they have cancelled their licence in protest, with one saying: ‘Just cancelled my DD for TV licence! If everyone in the UK done the same what could they do?!’

Another tweeted: ‘Just cancelled my BBC TV licence and disconnected my aerial in response to the BBC’s poor decision to cancel TV licence fee waiver for the over 75s!’

And a third said: ‘We must stop watching the BBC. I just cancelled my TV licence because I am annoyed they want to start charging over 75s to pay TV licences.’

Mr Gregg, 99, accused the broadcaster of ‘robbing the piggy banks’ of the generation who saved the world from Hitler, as a petition urging the government to take back responsibility for free licences hit more than 400,000 signatures.

‘It’s only two days ago that they were patting all these old people on the head and calling them heroes,’ he told Good Morning Britain.

‘It’s disgraceful – they want money, they’re overspending. Who do they attack? Those who can’t answer back. 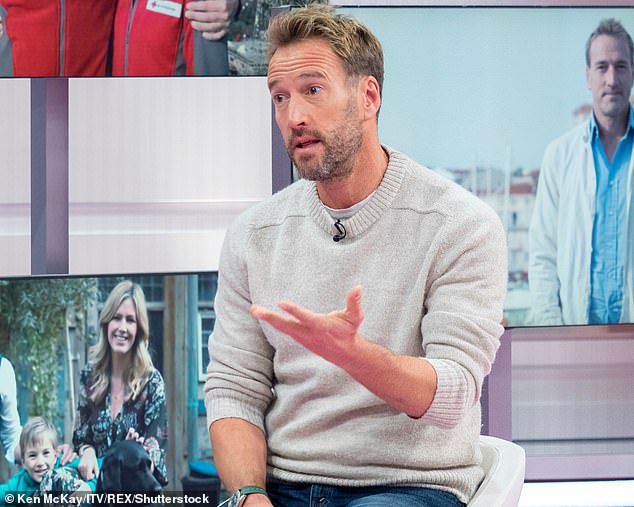 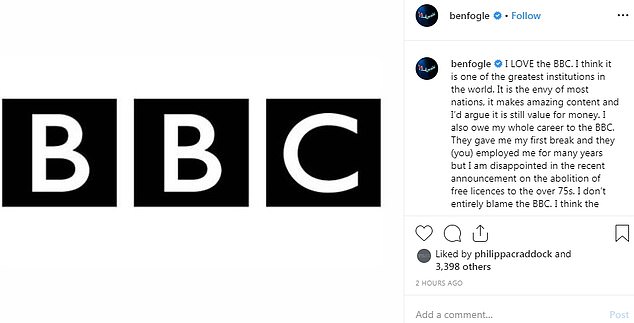 The former Countryfile star revealed his plans on Instagram earlier today, saying it is the ‘least I can do’ for an ‘often neglected sector of society’

What does the BBC spend its money on?

The BBC Annual Report and Accounts for 2017/18 shows what the corporation spends its money on. The following is spent on TV:

The BBC pays a combined £655.6 million for radio, that includes Radio 1, Radio 2, Radio 3, Radio 4 and services in Scotland and Wales.

The cost for the BBC Online website and the red button service is £290.3 million.

Some of the other services the BBC spends money on are as follows:

The BBC was set to take on the financial burden of providing free licences for over-75s from the Government in 2020 and Stanley Johnson, the father of Tory leadership candidate Boris Johnson, said the responsibility should be passed back.

He said: ‘This is an aspect of social policy and the Government ought to take this one on board, no reason to load it off on to the BBC.

Meanwhile, pensions expert Baroness Altmann urged the government to fund the free licences to maintain the concession in its current form.

‘One week, our country salutes the magnificent D-Day veterans who fought for our freedom, the next it snatches away their much valued benefit,’ she wrote in a letter to The Times today.

One pensioner, David, 84, said there were ‘millions like me’ who would suffer because of the move.

‘The TV is a vital lifeline for me… and I’m not alone, there are millions of us who are in exactly the same situation,’ he said. ‘If the TV was withdrawn they would vegetate. That’s a very serious situation and it puts a very great cost on the NHS. That’s what they need to think through.’

Five Tory leadership candidates waded into the debate to urge the BBC to think again.

Free TV licences will be revoked  from June next year. From that point, the exemption will be available only to those on Pension Credit, a benefit claimed by 900,000 low-income households.

Non-payers face criminal charges and a £1,000 fine. They could also end up in jail if they do not settle the court charge.

Veterans minister Tobias Ellwood predicted that a million war heroes would be affected by the cut.

‘A week after D-Day commemorations these people are going to be facing these bills,’ he told Good Morning Britain.

‘I do hope we go back to the drawing board and think what more can we do to look after our veterans.

‘Let’s look at this again. Let’s recognise the importance that these licence fees have for those, particularly veterans and why it’s so valued.’

If you either (a) watch or record programmes as they’re being shown on TV or live on an online TV service, or (b) download or watch BBC programmes on iPlayer – live, catch up or on demand, you must have a TV licence.

This applies to any device or provider you use, including a TV, desktop computer, laptop, mobile phone, tablet, games console, digital box or DVD/Blu-Ray/VHS recorder.

You can be prosecuted under the criminal law if the BBC – which has a national database and a fleet of detector vans – discovers you have een watching, recording or downloading programmes illegally.

The maximum penalty is a £1,000* fine plus any legal costs and if the fine goes unpaid it is possible a jail term can be imposed.

Iris Singer, a 79-year-old retired social worker and psychotherapist, said the BBC’s decision could lead to depression for those affected. She added: ‘I could also see suicide. What’s the point, at our age, of living if you’ve got to go through that unbearable hassle of going to court? And then to go to prison? It’s not conscionable.’

The Department for Work and Pensions used to shoulder the bill for free TV licences, but the Government offloaded the responsibility on to the BBC as part of a deal struck in 2015.

By doing so, it effectively saddled the broadcaster with a potential bill of £745million in 2021, rising to more than £1billion by 2029, to cover the cost of all free licences.

In return, it gave the broadcaster permission to either change the rules governing the entitlement from next year, or to scrap it altogether.

It also said the BBC licence fee could increase with inflation, and agreed to close the so-called ‘iPlayer loophole’ which allowed people to watch catch-up TV online for free.

The move will save the BBC £495m from 2021, but leave 3.7m pensioners without free television.

In contrast, the £290 million bill for the BBC website and red button service in 2017/18 could fund more than 1.9 million free licences.