Dozens of migrants test positive for coronavirus at sea

The positive tests represent the largest cluster yet among newly arrived migrants. A handful of positive cases were recorded among new arrivals to Greece in May.

The migrants were being held on a ship off the Sicilian town of Porto Empedocle where some would-be asylum seekers are taken to undergo quarantine after being rescued at sea.

SeaWatch, the German aid group that is active in migrant rescues, had flagged an asymptomatic migrant it had rescued earlier in the week who turned out positive.

SeaWatch said it was then ordered to undergo at-sea quarantine and more tests among other migrants.

A file photo shows migrants on board the German NGO search and rescue ship Sea-Watch 3 in Porto Empledocle, Italy on June 17

It said tests among the crew were negative, and insisted it had followed all relevant health protocols designed to prevent transmission.

But SeaWatch acknowledged it was operating in the context of a pandemic and that cases of coronavirus were increasing in Libyan migrant camps.

Sicily governor Nello Musumeci said in a Facebook post Wednesday that the 28 positive tests confirmed that he was right to demand special at-sea quarantine measures for migrants to prevent new virus clusters from forming in Italy, the one-time European epicenter of the COVID-19 pandemic.

Right-wing opposition leader Matteo Salvini, who implemented a hard-line anti-migrant policy when he was Italy’s interior minister, said the positive tests proved migrants were a threat. 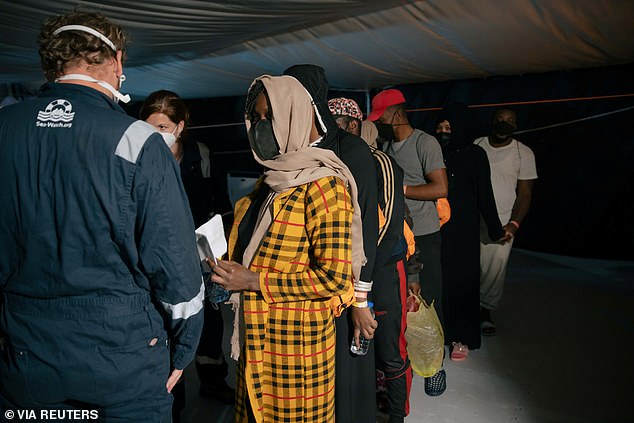 Migrants wearing face masks as a means of protection against the coronavirus disease (COVID-19) wait to disembark from the German NGO search and rescue ship Sea-Watch 3, before being transferred on board the Moby Zaza ferry to be quarantined, in the port of Porto Empledocle, Italy on Sunday

In a series of tweets, Salvini pushed back at critics who accused him of being racist and faulted Premier Giuseppe Conte’s government for seeking to soften Italy’s migrant policy.

‘While Conte takes apart the security decree and opens the ports, the NGOs bring COVID-19 migrants to Italy. Public health is at risk,’ he tweeted, adding #stopinvasion.

The positive tests come as a parliamentary commission is visiting Porto Empedocle to check on migrant and health care issues.

Summertime has traditionally been peak season for migrant smugglers operating in lawless Libya.

Italian officials have predicted new waves of migrants might set out this year with the easing of Italy’s coronavirus health emergency and the resumption of humanitarian rescue ships in the Mediterranean.