Dozens of world leaders will gather today in Jerusalem to commemorate the Holocaust and mark the 75th anniversary of the liberation of Auschwitz.

However, Polish President Andrzej Duda will not attend due to rankling disputes with Russia and Israel. Poland was where the Nazis built Auschwitz and other infamous concentration camps during World War Two.

Despite the controversy, Israel has hailed the World Holocaust Forum as the biggest international gathering in its history.

The Prince of Wales will later speak at the Yad Vashem memorial centre in the capital and warn in his address how ‘hatred and intolerance still lurk in the human heart.’

More than one million people, most of them Jews, were killed at the Auschwitz-Birkenau camp. Six million Jews died in the Holocaust.

The three-hour-long event at Yad Vashem – called ‘Remembering the Holocaust: Fighting Antisemitism’ – looks to project a united front in commemorating the genocide of European Jews amid a global spike in anti-Jewish violence in the continent and around the world. 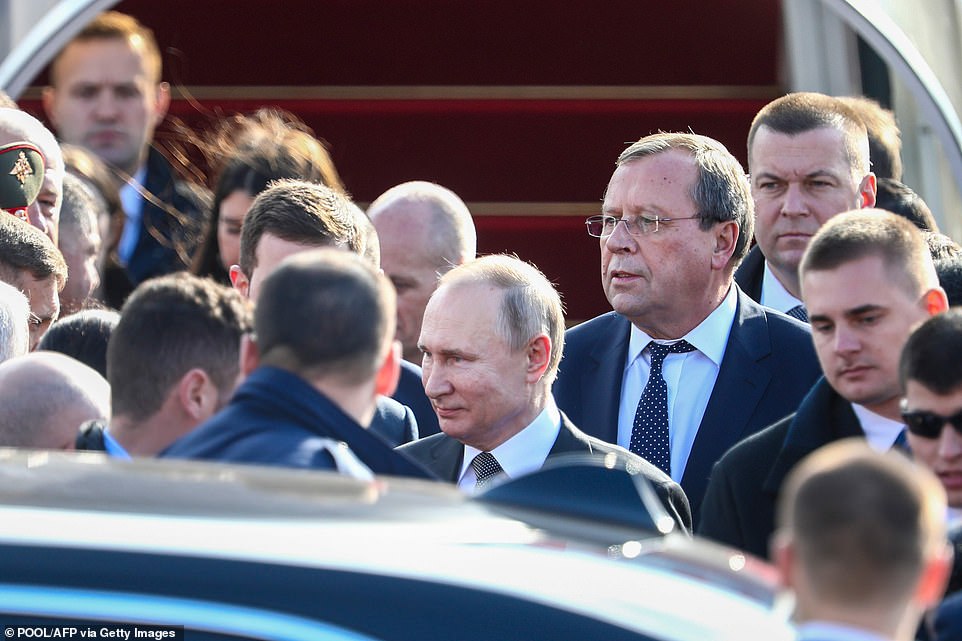 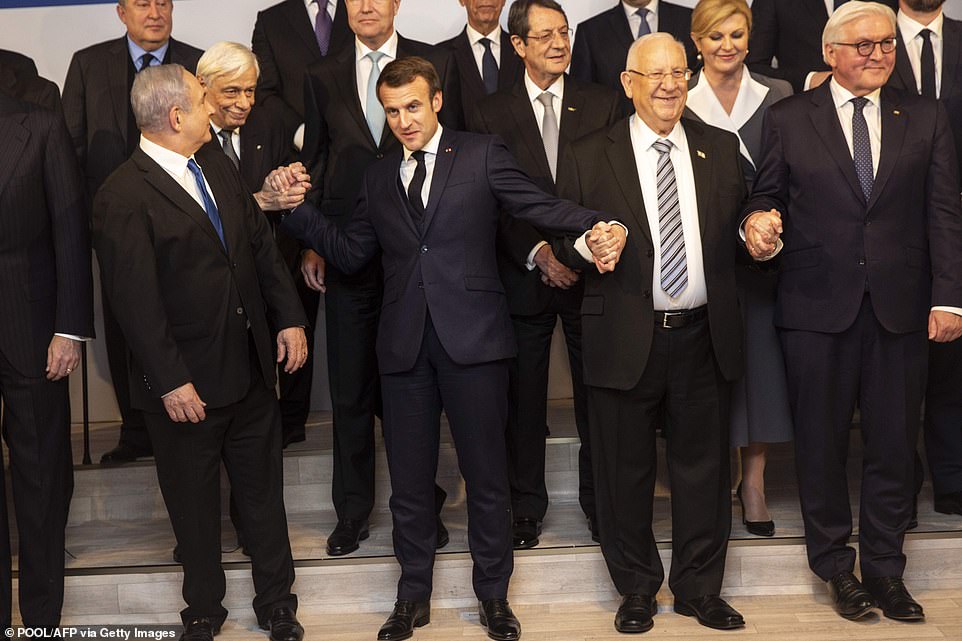 Israeli Prime Minister Benjamin Netanyahu (front L) looks behind him as he stands next to (L to R) French President Emmanuel Macron (front-2nd L), his Israeli counterpart Reuven Rivlin, and German counterpart Frank-Walter Steinmeier, as they pose with other heads of state for a group photograph following a dinner reception at the Israeli President’s official residence in Jerusalem, on Wednesday night 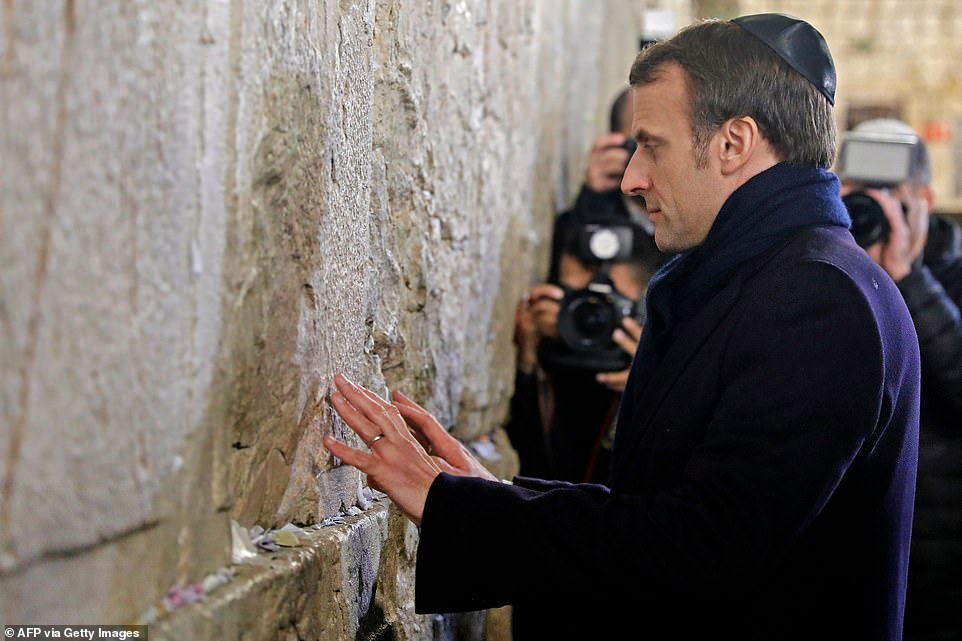 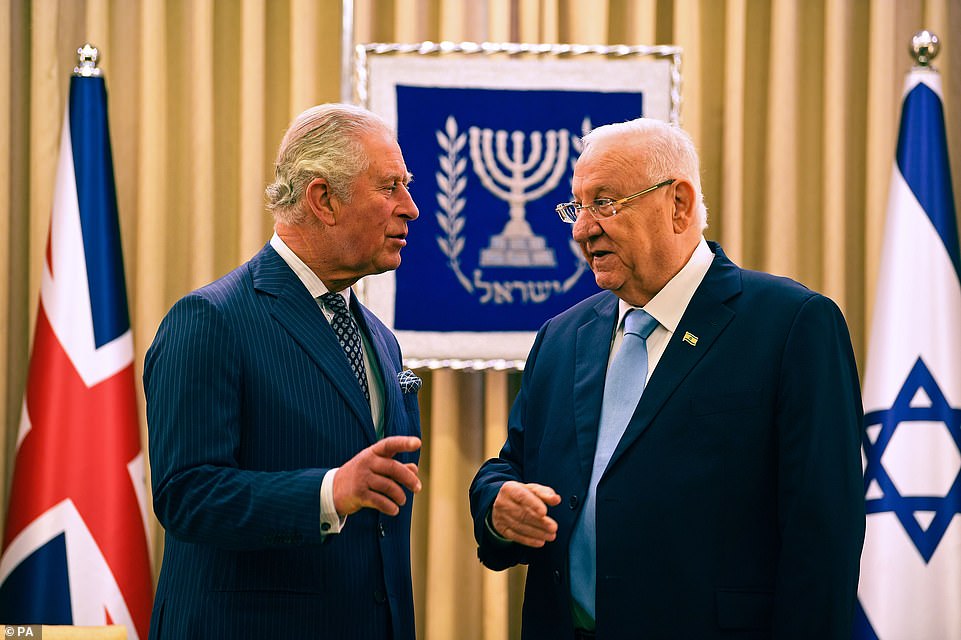 The Prince of Wales speaks to the Israeli President Reuven Rivlin on Thursday morning at his official residence in the capital, later today the royal will speak at the World Holocaust Forum

Poland will host its own event at the Auschwitz-Birkenau Memorial and Museum on January 27.

Speeches at the Jerusalem event are likely to focus on the horrors of the Nazi Holocaust as well as a more recent rise in anti-Semitism rhetoric and attacks worldwide.

A global survey by the U.S.-based Anti-Defamation League in November found that global anti-Semitic attitudes had increased, and significantly in Eastern and Central Europe. It found that large percentages of people in many European countries think Jews talk too much about the Holocaust.

Israeli President Reuven Rivlin addressed this at a reception he hosted on Wednesday for the visiting leaders. 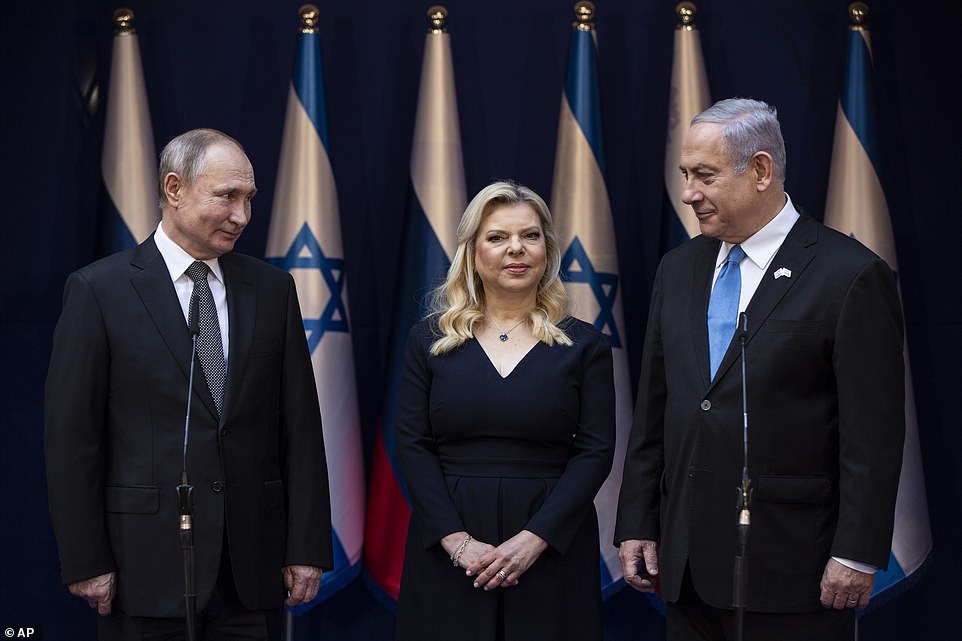 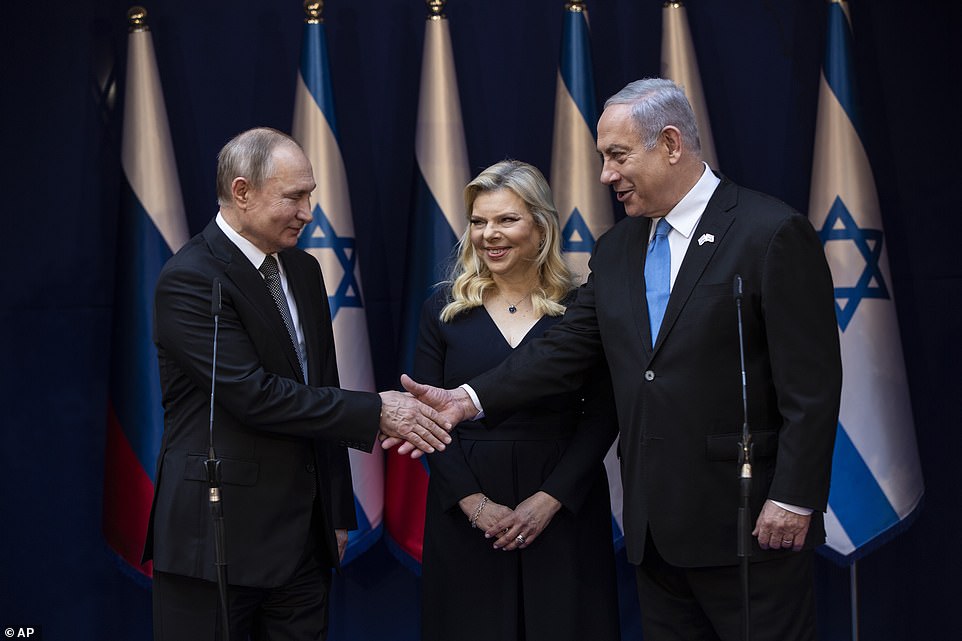 Putin and Netanyahu shake hands at the official residence in Jerusalem on Thursday morning, Netanyahu’s wife Sarah stands between them 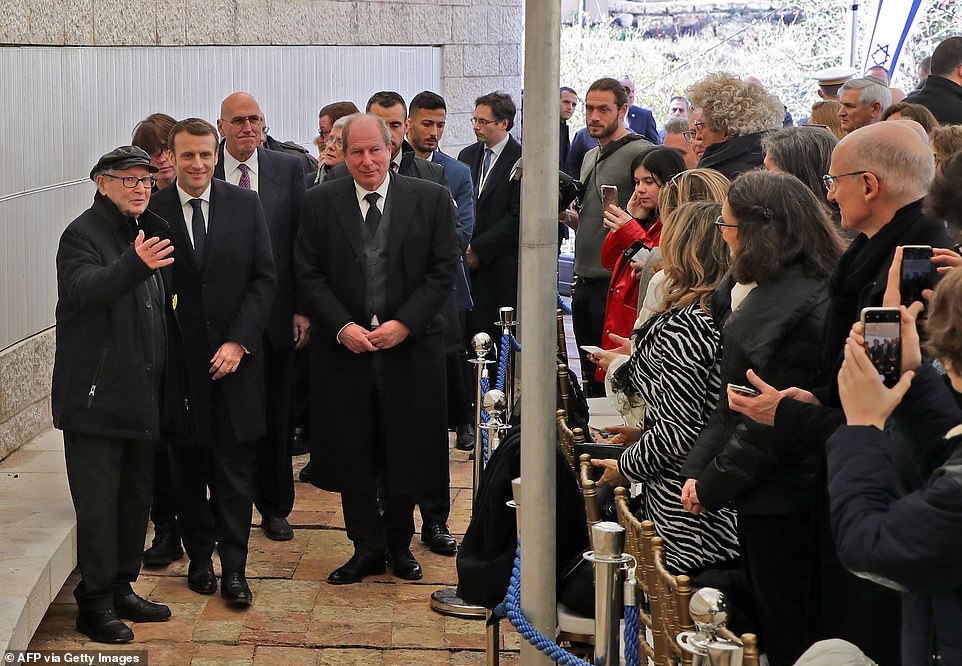 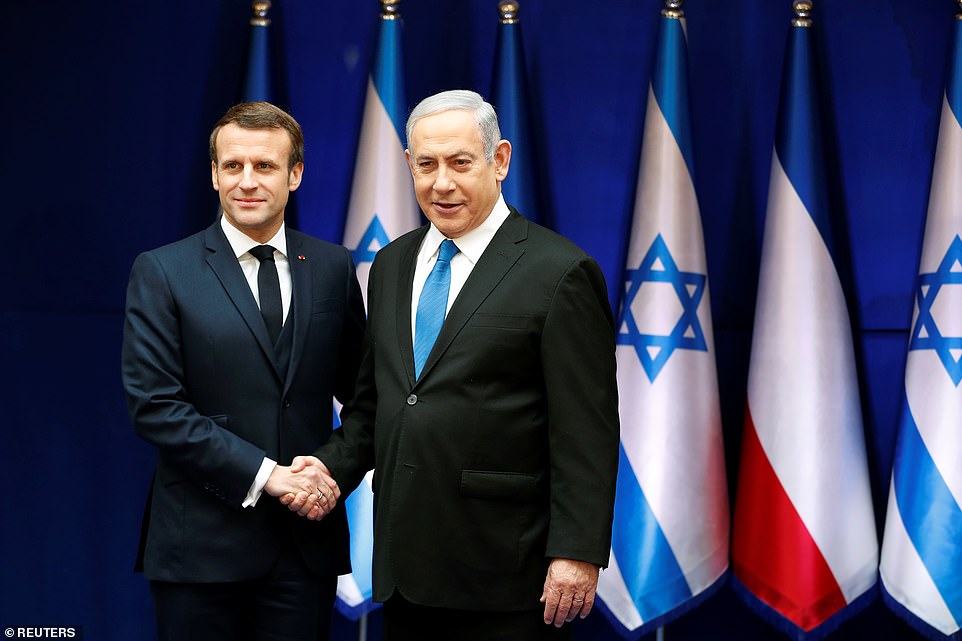 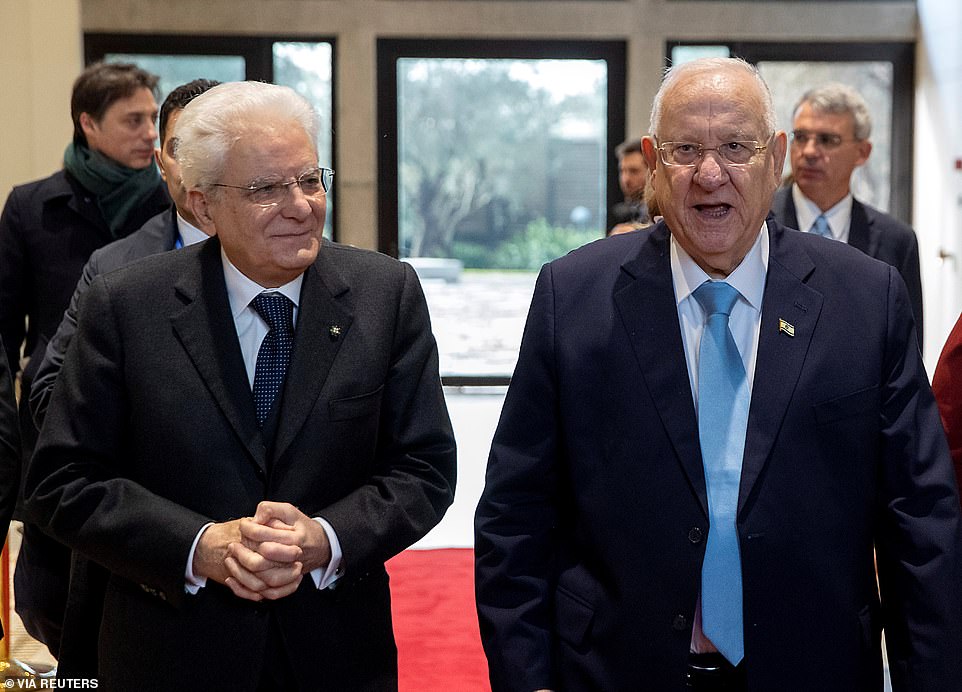 ‘I hope and pray … that the leaders of the world will stand united in the fight against racism, anti-Semitism and extremism, in defending democracy and democratic values,’ he said.

Polish President Andrzej Duda turned down an invitation to the conference, expressing dissatisfaction that representatives of Russia, France, Britain, the United States and Germany would speak, while Poland was told it would not be allowed to. 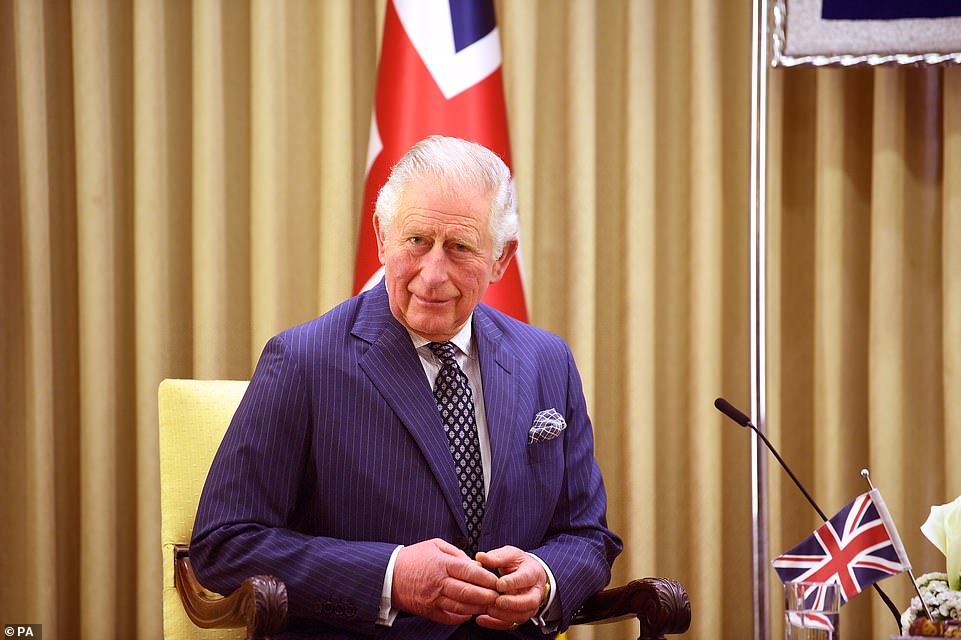 Prince Charles will today warn how ‘hatred and intolerance still lurk in the human heart’ when he joins world leaders in Israel to commemorate the Holocaust and mark the 75th anniversary of the liberation of Auschwitz (pictured: meeting with Israel’s President Reuven Rivlin at his official residence in the capital on Thursday morning) 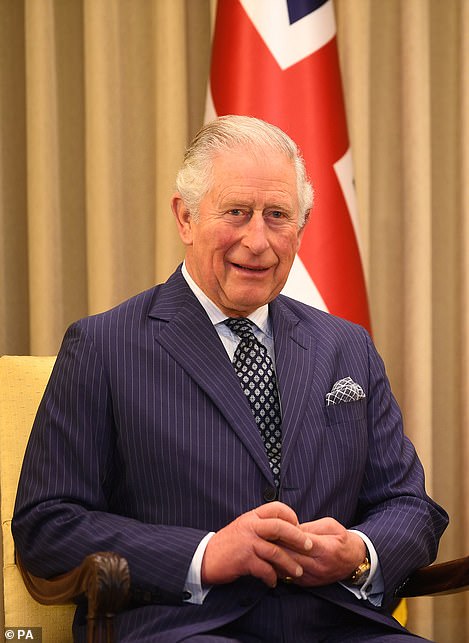 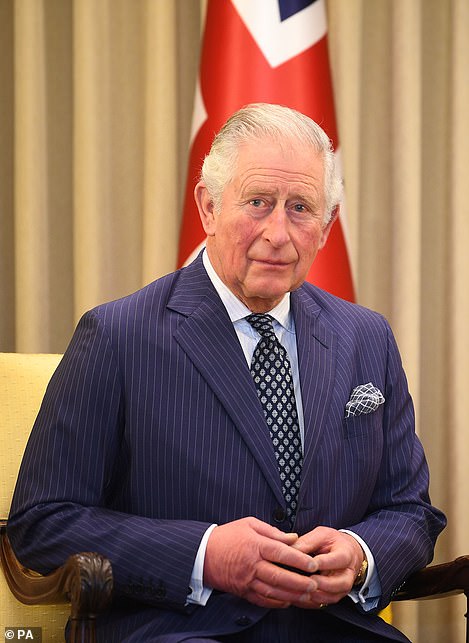 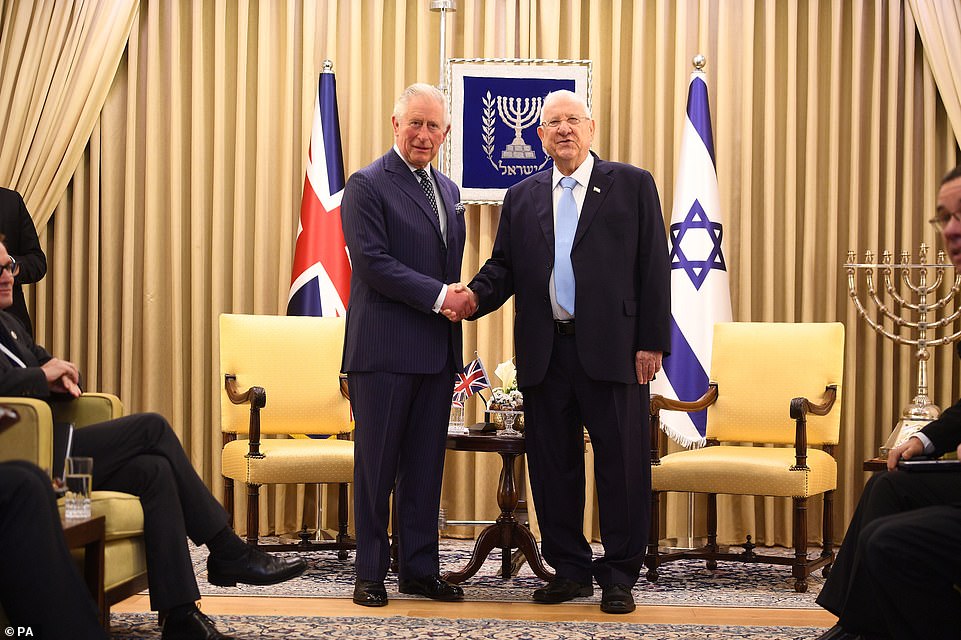 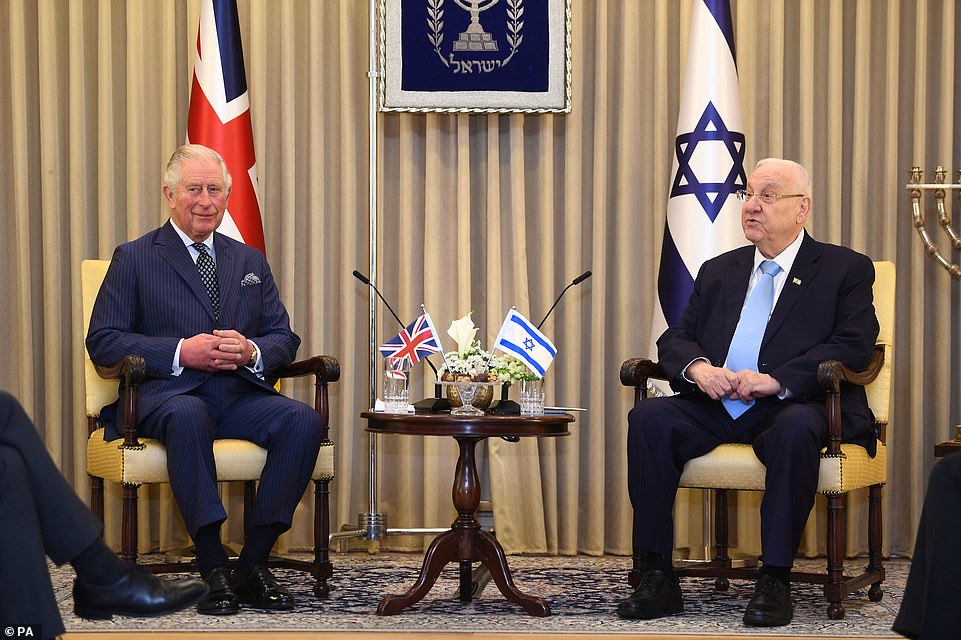 Israeli organisers said only the four World War Two allies, and Germany, would address the gathering.

Polish leaders have also been angered by comments made by Putin last month suggesting Poland shared responsibility for the war.

Warsaw will be scrutinising speeches by Putin and Netanyahu, who Israel’s Channel 12 TV reported might echo some of the Russian leader’s accusations against Poland in return for the pardon of an Israeli woman imprisoned in Russia on drug charges. 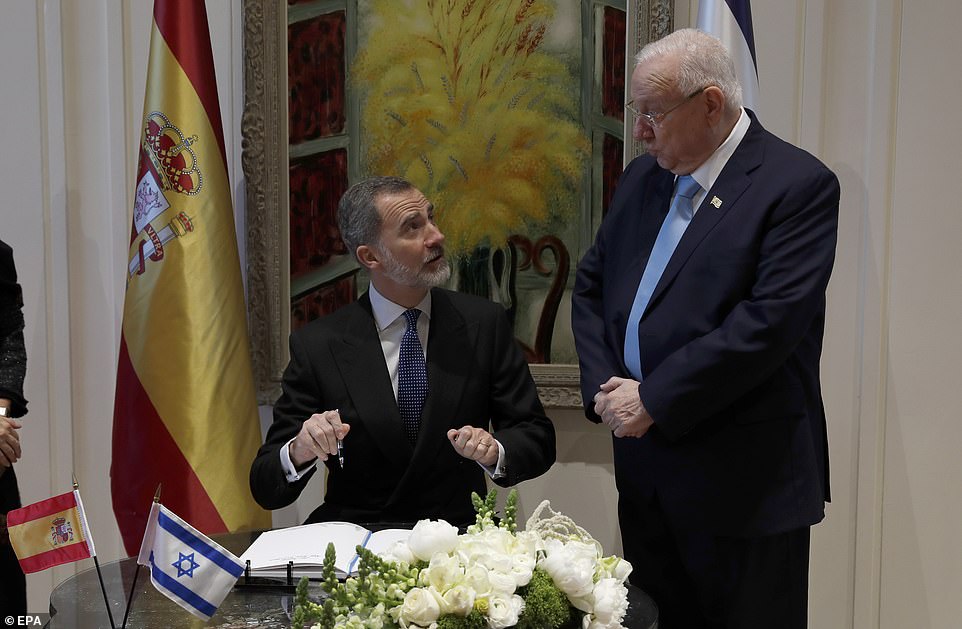 King Felipe VI of Spain prepares to sign the guest book as Israeli President Reuven Rivlin looks on, at the official residence of the President of Israel, ahead of the Fifth World Holocaust Forum in Jerusalem on Thursday 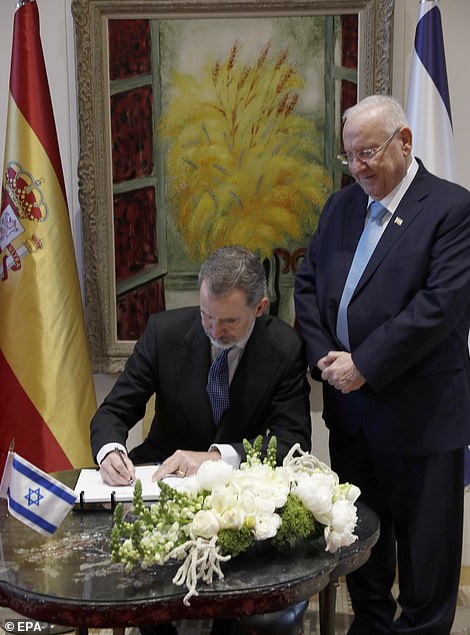 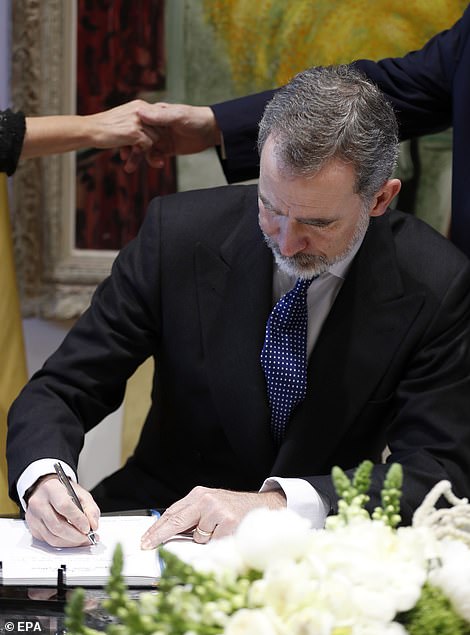 King Felipe VI of Spain signs the guest book as Israeli President Reuven Rivlin looks on, at the official residence of the President (left and right) on Thursday

‘Above all, we are asking that the memory of the Holocaust, that terrible crime, the memory of its victims, is not exploited for political reasons. That would be vile,’ Poland’s deputy foreign minister, Szymon Szynkowski vel Sęk, said on Tuesday.

The international gathering could burnish Israeli Prime Minister Benjamin Netanyahu’s domestic image as an international statesman. The veteran right-wing leader faces his third election in less than a year on March 2, amid legal woes and political deadlock.

Fighting for his political survival, Israel’s longest-serving premier has been using sideline meetings with international leaders at the conference to call for more sanctions against arch-enemy Iran. 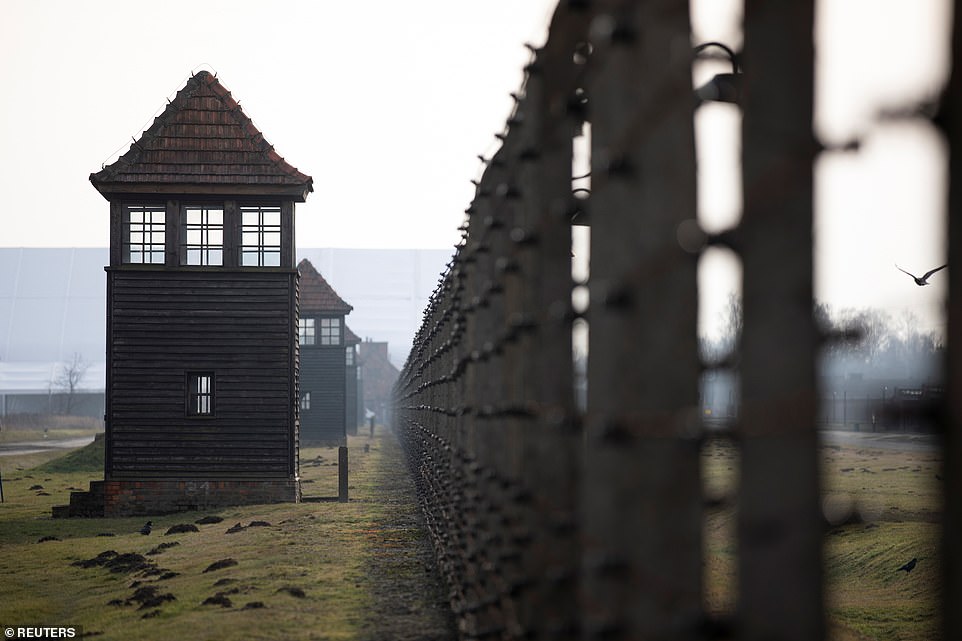 More than one million people, most of them Jews, were killed at the Auschwitz-Birkenau camp. Six million Jews died in the Holocaust (pictured: watchtowers of former Nazi German Auschwitz-Birkenau concentration camp complex are pictured in Oswiecim, Poland earlier this month) 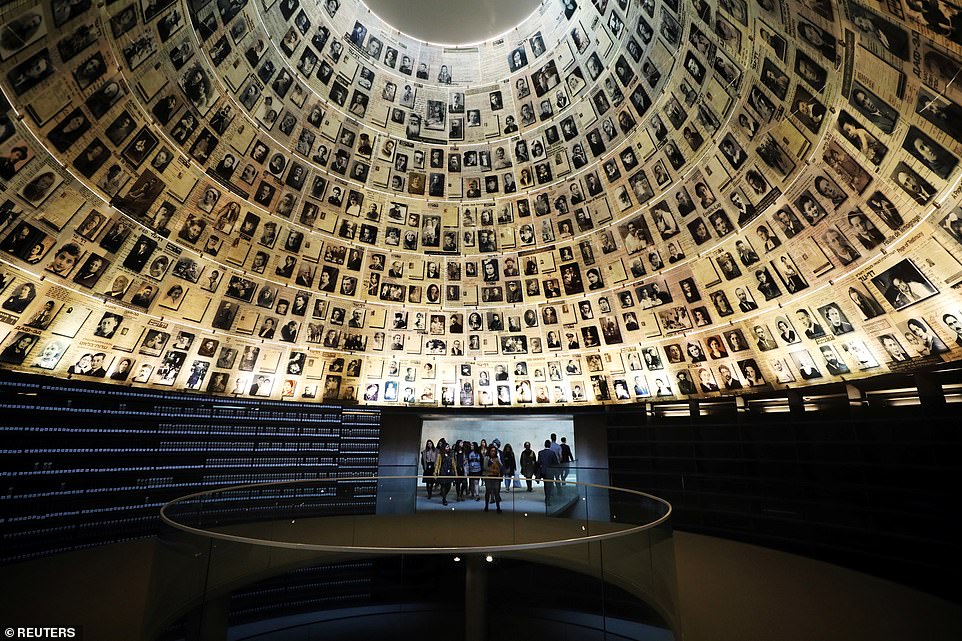 France, along with Britain and Germany, last week declared Iran in violation of a 2015 nuclear pact. They launched a dispute mechanism that could lead to reimposition of U.N. sanctions lifted after the agreement to limit Tehran’s atomic activities was signed.

French President Macron met Israeli and Palestinian leaders on Wednesday and toured Christian, Jewish and Muslim sites in Jerusalem, including the Church of St. Anne, the Muslim Noble Sanctuary that houses al-Aqsa mosque, a site revered by Jews as Temple Mount, and Judaism’s Western Wall.

Macron then headed to Ramallah for a meeting with Palestinian President Mahmoud Abbas, who issued a statement through the official Palestinian news agency calling upon European leaders to revive the long-stalled Mideast political peace process and ‘save the two-state solution.’