DR ELLIE CANNON: Has flu robbed me of my sense of smell?

After a bad bout of flu, I lost all sense of taste and smell. I can’t even smell my toast burning. Doctors say neither will ever return. Is this right?

About five per cent of the population suffer a problem with their sense of smell. Some have a reduced sense, others lose it altogether, and some smell things that aren’t really there.

Interestingly, smell disorders can also affect your sense of taste – the two are so intrinsically linked.

This case sounds like anosmia, which describes a complete loss of sense of smell – and one of the most common causes of anosmia is a viral infection such as flu.

It can also be triggered by sinus infections, non-cancerous growths in the nasal lining, some medicines and Alzheimer’s.

It is worth exploring other potential causes with your doctor, as they may have coincided with the infection.

Usually, flu-related loss of smell lasts only a few weeks. It can be permanent but a doctor should only conclude it to be so once a full assessment has been done by an ear, nose and throat specialist (stock image)

Usually, flu-related loss of smell lasts only a few weeks. It can be permanent but a doctor should only conclude it to be so once a full assessment has been done by an ear, nose and throat specialist.

This would involve a camera being inserted into the nose, as well as imaging of your brain with a CT scan.

It’s not just quality of life that’s affected by poor smell – it can compromise safety too. People may be unable to detect smoke, fire, gas leaks and even tasting or smelling whether food has gone bad.

It is important to be aware of these dangers and take safety measures to mitigate the risks. For instance, make sure you have smoke detectors and cook with electricity rather than gas.

There’s a complementary treatment called smell-training which is effective for some patients. This is a programme to reintroduce smells by teaching the nerves to recognise them. The website fifthsense.org.uk should have information about training programmes in your area.

I hurt my knee while playing tennis. My doctor said that it’s something called patella pain. How long until I can get back on the court again?

One of the most common causes of sports-related knee injuries is called patellofemoral pain syndrome, also known as ‘runner’s knee’.

This condition is especially common in those who play tennis regularly if repetitive, energetic movements impact the joint between the patella and the thigh bone.

The pain usually starts gradually but will worsen as you play more.

Often people notice that stairs are a particular trigger because of the repeated knee-bending. It is also worse after prolonged periods of sitting when the knee remains bent.

If you are diligent with treatment, you could be back on the tennis court within six to 12 weeks. But be sure to take things slowly when you do.

Aim to ice the joint twice a day, in order to reduce inflammation.

A regular regime of anti-inflammatory drugs such as ibuprofen or aspirin will also help, allowing you to get on with normal day-to-day movements.

Physiotherapy can help some people with patella pain.

Therapists can develop a specific rehabilitation programme for you to strengthen the thigh muscles that support the knee – the quads – as well as stretching, or suggesting orthotics. 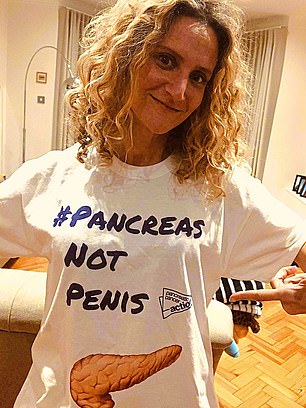 Rather embarrassingly, one in five mistook it for a penis

Can you name the organ pictured on my T-shirt, right? A shocking 40 per cent of Britons can’t, according to a new survey.

Rather embarrassingly, one in five mistook it for a penis. It is of course the pancreas – a small organ behind the stomach that makes essential juices and hormones to help us absorb energy from food.

Now, the charity Pancreatic Cancer Action is calling for us to pay closer attention to it to help us recognise when something is wrong with it. Only one in five patients survives pancreatic cancer for a year after diagnosis – and our failure to spot the signs is partly to blame.

Perhaps if patients knew the signals of a serious fault with this little-known organ – pain in the upper stomach and back, weight loss and yellowing of the skin – they’d get to the doctor sooner.

Teaching people to recognise the body part seems a good place to start. 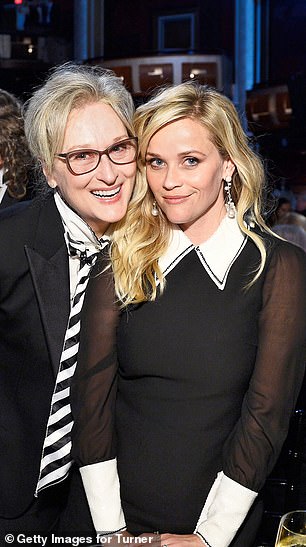 At what age should we begin to ‘slow down’?

New Government statistics say that old age now begins later than ever before – at 70, rather than 65.

Healthier lifestyles are said to be causing a five-year delay to the final chapter of our lives.

Well I don’t plan to put an age limit on my thirst for life. Nor should anyone.

Take actor Meryl Streep, right. At 70, she certainly isn’t slowing down, currently starring alongside actors 30 years her junior in the hit US TV show Big Little Lies, such as Reese Witherspoon, left, who’s 43.

I know plenty of patients well into their 70s who have more energy and enthusiasm for life than they did in their 20s.

Casting older adults off as irrelevant adds to isolation and loneliness – one of Britain’s biggest killers. We need to start talking about life stages, rather than ages.

Write to DrEllie@mailonsunday.co.uk or to Health, The Mail on Sunday, 2 Derry Street, London W8 5TT