Dr. Anthony Fauci suggested Sen. Rand Paul’s comments were ‘cavelier,’ after the Kentucky Republican said schools should reopen in the fall because the ‘low mortality’ of COVID-19 in children.

During Tuesday’s Senate hearing, Paul launched into speech about how a national approach to deal with the coronavirus is the wrong way to go, explaining that ‘outside of New England, we’ve had a relatively benign course for this virus nationwide’ and schools should decide to open on a district-level.

Dr. Anthony Fauci suggested Sen. Rand Paul was being ‘cavalier’ after the Kentucky Republican argued that the ‘low mortality’ rate COVID-19 has in children means the U.S. should be sending children back to school 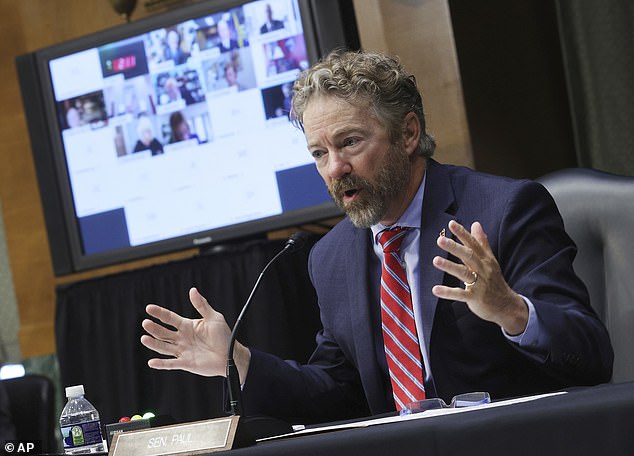 Sen. Rand Paul launched into a speech at Tuesday’s hearing about how schools needed to reopen in the fall. In the process, he told Dr. Anthony Fauci that he wasn’t the ‘end all’ and said the coronavirus was ‘relatively benign’ outside of New England

Paul started what would eventually become a dig at Fauci by suggesting the country should at least be looking at the mortality the virus has on children.

The Kentucky Republican, who’s an eye doctor by trade, said it’s so low it ‘approaches zero.’

‘We need to observe with an open mind what went on in Sweden where the kids kept going to school,’ Paul continued, explaining that the death count in Sweden is lower than some European countries that practiced better social distancing. ‘But basically I don’t think there’s anybody arguing what happened in Sweden is an unacceptable result, I think people are intrigued by it.’

Paul then turned to models on disease spread, saying he believed that ‘there have been more people wrong with modeling than right.’

‘We are opening a lot of economies around the U.S. and I hope people who are predicting doom and gloom … will admit that they’re wrong if there isn’t a surge, because I think that’s what’s going to happen,’ the prominent libertarian said.

He said in rural states, like Kentucky, ‘we never really reached any sort of pandemic levels.’

‘And I think the one-size-fits-all that we’re going to have a national strategy and nobody is going to go to school is kind of ridiculous,’ Paul continued. ‘We really should be doing it school district by school district.’

‘So I think we ought to have a little bit of humility in our belief that we know what’s best for the economy,’ Paul said.

He then commented to Fauci that he didn’t believe the doctor was the ‘end all.’

‘We can listen to your advice, but there are people on the other side who say there’s not going to be a surge and we can safely reopen the economy. And the facts will bear this out,’ Paul said.

Paul said closing schools for another year would only hurt the ‘poor and under-privileged kids.’

‘And I think we ought to look at the Swedish model and we ought to let our kids get back to school, I think it’s a huge mistake if we don’t answer our schools in the fall,’ the senator suggested.

Fauci asked Senate HELP Committee Chairman Lamar Alexander if he could respond, getting the green light.

‘First of all Senator Paul, and thank you for your comments, I have never made myself out to be the end-all and only voice in this. I’m a scientist, physician and public health official. I give advice according to the best scientific evidence,’ the doctor said.

‘The second thing, is that you used the word we should be humble about what we don’t know and I think that falls under the fact that we don’t know everything about this virus,’ Fauci continued. ‘And we really better be very careful particularly when it comes to children.’

The government doctor explained how physicians are seeing problems in children in the United States that weren’t seen in early studies out of China and Europe.

On Tuesday, New York City Mayor Bill de Blasio said a total of 52 children have been diagnosed with this inflammatory syndrome, which is possibly linked to COVID-19. Another 10 cases are pending, while one child has died.

‘I think we better be careful if we are not cavalier in thinking that children are completely immune to the deleterious effects,’ Fauci told Paul at the hearing.

‘So again you’re right in the numbers that children, in general, do much, much better than adults and the elderly and particularly those with underlying conditions,’ Fauci said. ‘But I am very careful and hopefully humble in knowing that I don’t know everying about this disease and that’s why I’m very reserved in making broad predictions.’

Paul, who previously contracted COVID-19 and thus refuses to wear a mask on Capitol Hill, left the hearing after this back-and-forth.

On his way out, according to a Politico reporter, Paul floated the idea that months of social distancing didn’t have an impact on the coronavirus’ spread.

‘Here’s the other question and this is unprovable,’ the senator said. ‘I think New York would have lost the same amount of people whether we did anything or not.’

‘A lot of what happens with the virus is independent of what government does,’ Paul concluded.