Australia’s first celebrity radio and TV doctor James Wright has died at the age of 94.

Dr Wright was the host of The Good Health show on 2UE and the ‘merry medic’ on The Mike Walsh Show and The Midday Show in the 1970s and 80s.

During that time ‘media consultants’ from the medical field were not permitted to use their real name on air.

Dr Wright was just two weeks away from celebrating his 95th birthday when he passed on November 27.

‘I used to love how he’d say to people when they’d call in on the program “what’s your problem?”, so no medical mumbo jumbo,’ Fordham said.

‘People would call in and tell him what was happening. They would often raise things with Dr James Wright that they were too shy to raise with their own doctor. 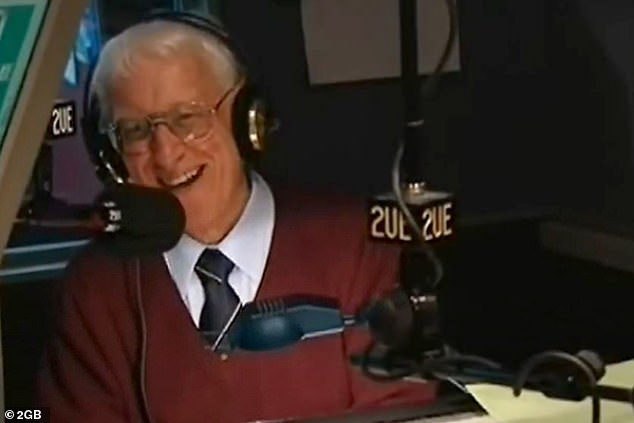 ‘He would answer everyone’s questions. He was eccentric, he was intelligent, he was a joy to be around.’

Dr Wright was recognised for destigmatising major health issues, including the 1980s HIV-AIDS epidemic, and started a charity to house seniors in 1971.

Fordham said he was ‘lucky enough’ to work with Dr Wright during his time at 2UE and applauded the senior’s philanthropic work.

‘Away from the microphone and TV studio he did incredible things to help people,’ he said.

‘He set up a foundation which owned hundreds of units in high-rise buildings in Surfers Paradise and he would rent those apartments to struggling aged pensioners for one third of their income.

‘If people didn’t have money he would still offer them a place.

‘He did incredible things and we will pay tribute.’

Dr Wright was acknowledged for his charity work in 2017 when he was nominated for NSW’s Senior Australian of the Year.

WHO WAS DR JAMES WRIGHT?

John Knight graduated from medical studies from the University of Sydney in 1953 and moved to the rural NSW town of Tottenham where he worked at the local GP.

He kicked off his celebrity career by writing health columns for Australian women in Women’s Weekly, Dolly, Cleo and Women’s Day as well as major city newspapers including The Sunday Telegraph and The Melbourne Herald Sun.

John Knight adopted the name Dr James Wright to appear on The Mike Walsh Show in 1972  and became a TV regular through The Midday Show.

He became famous for simplifying medicine for everyday Australians – even bringing cameras into hospital operating theatres and intensive care units.

In the 1980s, Dr Wright took on the job of destigmatising HIV-AIDS.

At the height of Australia’s epidemic, he would teach everyday Aussies about the realities of the disease and work to reduce hysteria.

In 1971 he and his wife, Noreen, established the Medi-Aid Foundation which provided affordable housing for financially-insecure elders.

He was awarded an Order of Australian in 1998 and was nominated for NSW’s Senior Australian of the Year in 2017.