My 60-year-old mother had a hip replacement in 2008, which is now causing her severe pain that gets worse by the day.

Her surgeon said metal from the implant is dissolving into her blood and she needs further surgery. Is this dangerous?

Your mother has suffered one of the complications of a hip replacement — though she will need another new joint, this should resolve the issue.

Her new hip joint was a metal-on-metal replacement, where both parts of the replacement joint — the ‘ball’ of the thigh bone and the lining of the hip socket — were made of metal.

Some one million such implants have been used worldwide, mainly between 2003 and 2010.

But, as time has passed, it has become apparent that some metal-on-metal types can lead to a number of complications, including rapid wear, which causes them to fail. As a result, the patient experiences pain and difficulty walking.

Minute particles of metal can also leach into the soft tissues around the joint, which can lead to inflammation and a build-up of fluid, causing swelling and pain.

A particular concern has been toxicity from the cobalt-chromium alloy used in implants. The metallic debris can be absorbed into the bloodstream and passed around the body, which may cause fatigue and weakness, as well as damage to vision and hearing, and could even affect brain function and the heart muscle.

By the way… Patients should record their appointments

I have been asked on many occasions whether I agree to patients recording our consultations.

This has never worried me, and I readily accept — but I can see how some doctors might be upset at being recorded, perhaps a little defensively, fearing that anything they have said that might be slightly inaccurate, or even verging on politically incorrect, might later emerge as a complaint.

I was recently reading about the work of Irvin Yalom (author of Love’s Executioner And Other Tales Of Psychotherapy), a psychiatrist and psychotherapist in California, and found a revelation: ‘ . . . Years ago, I conducted an experiment in which a patient and I each wrote our own review of each of our therapy hours.

‘Later, when we compared them, it was at times difficult to believe that what we described was the same hour. Even our views of what was helpful varied.’

None of what he says is a surprise to me. These observations must apply in our everyday practice, too. And now, with modern mobile phone technology, recording a voice file is easy.

Conversations with the doctor can be retained for future reference, the patient thus enabled to recall both sides of the discussion.

I cannot see that this is anything other than valuable and, as doctors, we should all get used to it. Rather than being resistant, perhaps we should be encouraging our patients to keep such records.

This is why the Medicines and Healthcare Products Regulatory Agency has recently called for all 56,000 UK patients given metal-on-metal hips to undergo X-rays and blood tests — even if they have no symptoms — to check if they have bone or tissue damage, or signs of metal debris.

Your mother’s specialist has already identified the problem — I imagine her levels of chromium and cobalt were also measured.

Before the new replacement, a special type of MRI scan is needed to assess the damage to the tissue (metal implants can distort the image of a standard MRI, as they have an effect on the magnetic field used to produce it).

This time, the socket part of the joint will be made of ceramic or polythene, while the ball that fits into it will again be a metal alloy.

Importantly, your mother’s local and widespread symptoms should resolve after this revision surgery.

For five months, I have suffered with continuous pain in both testicles. An ultrasound scan was clear, and prescribed antibiotics didn’t help. My urologist says the pain should disappear naturally.

But it is unbearable and is starting to disrupt my sleep. What’s causing this? I am 24.

Testicular pain is surprisingly common and can affect men of any age. The cause, though rarely sinister, is unknown — and so no formal diagnosis or treatment is available. I refer to this symptom as chronic pelvic pain syndrome.

It is felt in one or both testicles, and patients complain of a nagging ‘headache in the pelvis’, or lower back pain, abdominal ache and pain high in the thigh muscles — in many cases, this is chronic and unrelenting.

Men will give urine and semen samples to eliminate infection. They will then be investigated by ultrasound to check for a tumour, yet these often come back clear.

The lack of a clear cause means treatment is often given in hope, rather than on the basis of any evidence of benefit. Antibiotics are sometimes prescribed, the theory being that symptoms are caused by an undetected bacterial infection. But in many cases, such as yours, these are not effective.

Doctors may also prescribe non-steroidal anti-inflammatory drugs, such as diclofenac suppositories, or medicines including tamsulosin, more commonly prescribed to treat an enlarged prostate gland — the idea here is that pelvic pain syndrome is caused by referred pain from the prostate. 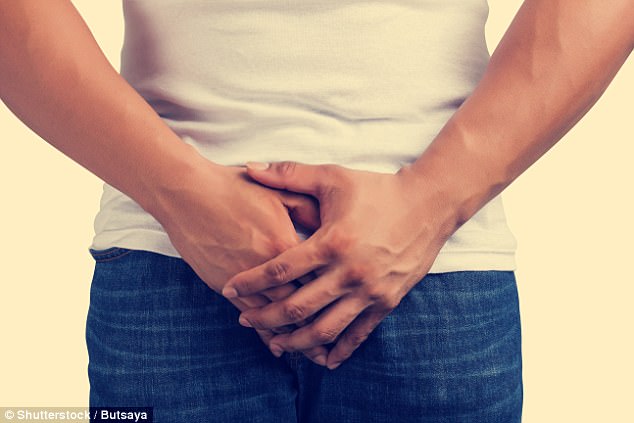 Testicular pain (file pic) is surprisingly common and can affect men of any age. The cause, though rarely sinister, is unknown — and so no formal diagnosis or treatment is available. I refer to this symptom as chronic pelvic pain syndrome

However, neither medication is consistently successful.

It is reassuring that disease has been excluded by your ultrasound scan. But I’m afraid there is no recommended treatment — for most, the issue should go away, but this can take up to a year.

Anecdotally, I have found some of my patients have benefited from taking a pollen extract supplement that contains the natural substance cernilton.

This could be worth a three to six-month trial.

Further to my advice last week concerning the use of induction hobs and risks to people with pacemakers, it has been brought to my attention that the advice sheet from Medtronic, a pacemaker manufacturer, states that the user should stand 2 ft (60cm) away from the hob.

The original inquiry came from a reader unable to find advice in their manufacturer’s manual.

My response followed detailed research, including the advice of two cardiologists and a physicist.

Further to this, I repeat that the magnetic field generated by an induction hob is so limited that if a cooking pan is lifted 2cm up from the hob, it does not get hot.

It seems Medtronic is being cautious, and it may be that induction hobs and pacemakers vary — some even have built-in protections against interference from magnetic fields. The best advice is to heed any manufacturer’s warning and to seek advice from your cardiologist.