DR MARTIN SCURR: Why your ‘bad breath’ may not be bad at all

I have had bad breath for nine years. I do not want to go to church or work because people laugh at me and I have become depressed. I have visited different specialists and had my tonsils and my wisdom teeth removed. Please help me.

I am saddened by your letter. This is a rare but recognised condition which I have seen several times, but it is unfamiliar territory for many doctors. On average, a patient can remain undiagnosed for seven or eight years, undergoing consultations with different specialists, and investigations and operations that may not be needed.

From the severity of your concerns and the fact that all investigations have found no underlying issues, I believe you have olfactory reference syndrome (ORS), an illness that leads people to believe that they emit abnormal, foul odours.

In my experience, the condition can result in embarrassment with such distress that patients become socially isolated, exactly as you have described.

Most of those affected (75 per cent) fear they have halitosis (bad breath), but other patients develop an obsession over different odours, such as the smell of their sweat.

Most of those affected by olfactory reference syndrome (75 per cent) fear they have halitosis (bad breath), but other patients develop an obsession over different odours, such as the smell of their sweat (file image)

Commonly, those who fear halitosis will repeatedly brush their teeth and scrape their tongues. Some even adopt special diets and other strategies, such as habitually sitting at a distance from others.

It does not surprise me that you have become depressed — it is a common result of this affliction. Do not allow yourself to think that, because this is a psychological problem, people might think it is imaginary: it is not.

There is something neurological that has created these symptoms. Psychological specialists know about this problem and it is treatable.

I advise you to consult your GP and seek a referral to a psychiatrist for confirmation of this diagnosis.

The path to recovery will require prescribed treatment, which may include a combination of medication, cognitive behavioural therapy (a form of talking therapy), and eye movement desensitisation and reprocessing (EMDR), a form of psychotherapy used to treat stress.

Hopefully your outlook and symptoms will improve within months.

I have been diagnosed with a macular hole, for which doctors have recommended surgery. I would value your views on the operation and recovery time.

The macula is the most sensitive central part of the retina (the thin layer of tissue on the back surface of your eye), and a macular hole is a small break in this vital light-sensitive layer.

Macular holes usually develop slowly and occur because the gel-like substance (called the vitreous), which fills the back of the eye and maintains the shape of the eyeball, shrinks and pulls away from the retinal surface, normally as a result of ageing. This tugging can create a hole, also called a retinal tear, which may lead to blurred and distorted vision. 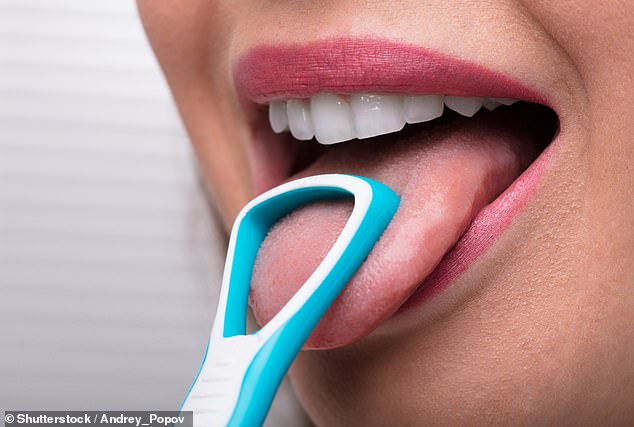 Commonly, those who fear halitosis will repeatedly brush their teeth and scrape their tongues. Some even adopt special diets and other strategies, such as habitually sitting at a distance from others (file image)

Macular holes sometimes heal on their own, but many can progress to retinal detachment (where the whole retina pulls away from the eye, which can result in a permanent loss of vision), so surgery is suggested.

The operation is called a vitrectomy and it can be performed under local or general anaesthetic. First, the vitreous is removed to allow access to the retina, which is then repaired, typically with a laser. The eye is then filled with a gas bubble, which acts as a temporary support to hold the macular hole in place as it heals.

During the vitrectomy, the epiretinal membrane can also be removed — a layer of scar tissue that forms as part of the healing response to the tear.

After the operation, you will be given strict instructions to remain face down for several days to ensure that the bubble presses against the retina to seal the hole. Your vision will be blurred at first, but as the bubble is slowly absorbed by fluid, your sight will return to normal. This takes two or three weeks.

The most common complication is the development of cataracts (a clouding of the lens). If this happens, you will need an operation to replace the lens with an implant. The prospects are good, so do be optimistic.