DR MAX THE MIND DOCTOR: TV is a lifeline for the elderly

What on earth were BBC bosses thinking when they decided to scrap free TV licences for Britain’s 3.7 million pensioners over 75?

It’s an outrageous decision and I’m pleased that, led by this paper, there has been such a huge backlash.

The BBC has hardly covered itself in glory in recent years when it comes to its ageist agenda. There have been several high-profile instances where older presenters have been replaced by younger ones, most famously Countryfile’s Miriam O’Reilly. Axed at the venerable age of 52 in 2009, she took the BBC to a tribunal on the grounds of age discrimination and won.

Earlier this year, veteran DJ Tony Blackburn, 76, complained that radio no longer caters for the older listener after his Radio 2 show, Sounds Of The 60s, was moved from its 8am slot on a Saturday to 6am to make way for a ‘cooler’ music show.

The BBC need to realise that television is a lifeline for many elderly people, say Dr Max

For such a politically correct, navel-gazing organisation, which is usually falling over itself to show how right-on it is, the BBC’s contempt for older people is exposed time and again. Now taking away their free TV licences is demonstrable evidence of the low esteem in which they are held.

As a society we should be cherishing the older generation and working to find ways of making their lives better. Sadly, it is not something we’re good at.

From a well-being point of view, there are clear mental health advantages in giving the over-75s — the most frail and often impoverished members of society — free TV licences. But TV is not a panacea for the loneliness of age as some critics of the BBC’s decision have suggested this week. 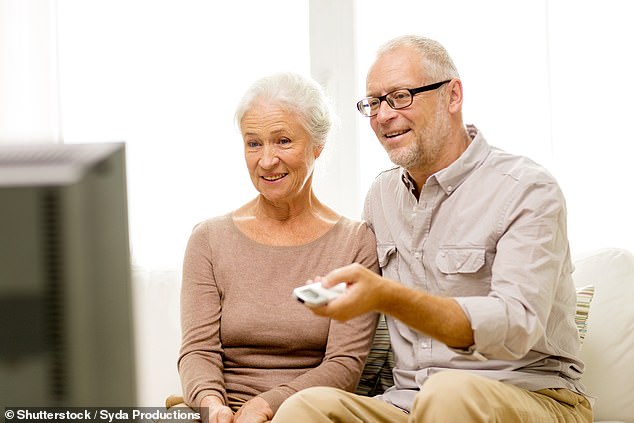 Indeed, many of my older patients say that they find this attitude patronising, as if a TV programme can somehow make up for the time spent sitting alone and perhaps not speaking to anyone face to face for days on end.

Psychologists have identified different types of loneliness. Social loneliness is when someone has little contact with other people or feels ignored or undervalued by those they do have contact with.

Then there is emotional loneliness, when the loss of a loved one leaves people feeling isolated by their grief. Finally, there is existential loneliness, when a person thinks there is no one who would care if they lived or died. Older people are more prone to all of these variants and TV on its own won’t make them feel any better.

But what it can do is make elderly people feel more engaged with the world, especially those who live alone, are house or bed bound, have poor mobility or other health problems that curtail their day to day lives. And it’s important, too, for those who live far away from their families, who rarely see sons, daughters and grandchildren.

It’s not just about keeping up to date with current affairs, although that is important. Indeed, for some elderly people, perhaps those who have had very active working lives, the thought that life is going on without them can be crushing.

What TV does is bring the outside world — through documentaries, history programmes, consumer shows, debates, drama and comedies — into their living rooms. It makes them feel that they are still part of something bigger, still part of society when they are watching what millions of others are watching, too. This is vitally important for boosting mental health and staving off depression.

Without the useful tool of TV, many would lose not only a comforting presence in their lives, but their peace of mind. The sooner the BBC reconsiders, the better.

Presented by psychotherapist Stella O’Malley, this documentary is a sensitive and even-handed critique of the current debates around trans children and at what point they should receive treatment. O’Malley provides a psychotherapist’s insight as well as personal experience — when she was a child, she was convinced she was a boy. Her concern for the current issues facing trans children and their parents shines through. A number of readers have written to me about this subject, and I think this programme — available on catch-up at channel4.com — best summarises all the issues.

…but it’s still bad to bind on Killing Eve

Like millions of fans I was looking forward to series two of Killing Eve (starring Sandra Oh and Jodie Comer, below), which kicked off last week. But I am disappointed that the BBC has (again) decided to release all eight episodes in one go.

TV on demand is a way of life, but I am trying to limit myself to watching only one episode a week so I can really savour it.

Yes, it probably seems old-fashioned, but isn’t suspenseful waiting part of the fun of watching a good TV series? And such ‘event TV’ can bring people together in a national conversation.

You can’t blame genes for being fat

Results from landmark research this week confirm that there is no one-size-fits-all approach to weight loss.

The £21 million study of 1,100 people is the most detailed investigation ever conducted into the effects of food on our bodies. It used identical twins to assess the claim that some people have fat ‘genes’ that make them prone to being overweight.

The researchers said they were astounded to discover how dietary carbohydrates and fats affect people differently, particularly their levels of blood sugar and fat. This puts them at greater (or lower) risk of weight gain, heart disease, type 2 diabetes and other serious disorders.

The study concluded that whether our bodies use food for energy or lay it down as fat is influenced by lifestyle factors such as sleep, exercise, when we eat and even bacteria in our gut.

What’s clear is obese people can no longer hide behind the ‘it’s all in my genes’ argument to absolve themselves of responsibility for their weight problems. I know from my experience working in an eating disorders clinic just how many do that!

I hope the findings will help doctors tailor diets to individuals, advising on a range of factors, rather than simply telling them to eat less. We all have more control over our weight than we like to think.

The other end of the spectrum is the phenomenon of ‘binge-watching’. A recent Radio Times survey suggests that half the population admits to having watched eight hours of TV — episode after episode of a series — in one go! This is similar to binge-eating. It’s more about the hit from the feel-good brain chemical dopamine, released in response to repeated stimulation, than enjoyment of a show.

It’s also bad psychologically because it doesn’t allow us to develop that key skill of delayed gratification.

Entertainment on demand makes us impatient, diminishes our powers of concentration and leaves us constantly seeking stimulation.

I’m in favour of slow TV — in weekly instalments.

Time’s up for drug giants

Another victory for the Mail this week as the European Medicines Agency finally accepted that the class of antidepressants known as SSRIs can have lasting effects on sexual function.

I wrote about this recently in the wake of the news that the Royal College of Psychiatrists has belatedly acknowledged how difficult it can be to come off antidepressants. The impact of some antidepressants on our patients’ sex lives is something that, as doctors, we have been hearing about for years. The pharmaceutical industry chose to ignore our concerns. Well, it won’t be able to do that any longer.

Perhaps we are at last starting to see an honest discussion about prescription medicines — essential if people are to make an informed decision about what treatment is right for them.

Antidepressants are in the news again after alarming claims they increase the risk of dementia threefold in people over 60. Predictably, this has triggered some panic — a GP colleague said he’s seen several worried patients.

I took a closer look at the multi-national study of more than 70,000 patients and was shocked to discover that its findings didn’t support the claims being made. What it actually found was an association between taking antidepressants and dementia. But it’s likely this is because depression can be an early indicator of dementia or that depression itself is involved in triggering dementia. There are many issues with this class of drugs, but it’s wrong to scare patients like this.