DR MEGAN ROSSI: Do you have a ‘leaky’ gut that needs fixing?

It’s not a condition that’s taught in medical schools and it’s very unlikely your GP will have heard of it, let alone say you have it.

But ‘leaky gut syndrome’ is becoming a very popular ‘diagnosis’ in the world of alternative therapies, and chances are you know someone who’s been told they have it.

The theory behind leaky gut syndrome is that toxins and bacteria enter the bloodstream through gaps in the gut wall, causing all kinds of health problems, from bloating and cramps to eczema, joint pain, fatigue and depression, even autism.

What causes this leakiness? Apparently sugar (and that includes fresh fruit), gluten and lactose are all triggers, damaging the gut wall.

The claim is that you can then heal your gut by cutting out these foods — and, invariably, by buying special supplements (which, invariably, are not cheap).

It’s easy to see why some people with such symptoms, many of which can seem so vague and disconnected, might be convinced by this diagnosis; at the very least, it gives them a name for their symptoms.

‘Leaky gut syndrome’ is becoming a very popular ‘diagnosis’ in the world of alternative therapies, and chances are you know someone who’s been told they have it

Trust me, as a clinician I understand that need for a diagnosis, and I believe all patients deserve a valid one.

The problem is that leaky gut is not a valid diagnosis.

That’s not to say that a leaky gut isn’t real — it most definitely is. It’s just not the root of all your problems, as many have claimed.

It’s a case I see all too often in the ‘wellness’ world, of some practitioners running away with the biology, building a very flimsy theory on real science.

First the science: our gut lining is made up of a barrier of tight junctions, like little doors that open and close to control what gets into our bloodstream.

It allows the passage of the good guys (for instance, nutrients to feed your body) and keeps out the bad guys (disease-causing nasties, or pathogens and toxins such as lipopolysaccharides, produced by certain bacteria).

Clean tap water is teeming with bacteria — up to ten million in a cup. Bacteria really are everywhere, and that’s a good thing: the vast majority look after us, so keep hydrated. No need for the bottled stuff, either.

The gut is the body’s first line of defence. It’s the reason we’re not all bedridden and defeated by infection every time we eat or step outside.

Sometimes these tight junctions can become weak or loose, allowing the nasties to sneak across the intestinal wall. We scientists call this intestinal hyperpermeability; a more user-friendly term is ‘leaky gut’.

In fact, all of us get a slightly more permeable or leaky gut lining temporarily, without any health consequences. It can happen when we eat a high-fat meal or drink a little too much alcohol, for instance.

Stress, too, is a common trigger. A study by the university KU Leuven in Belgium in 2014 looked at students before and after public speaking, and found that those who were more nervous and stressed (as measured by the stress hormone cortisol in their saliva) were the ones whose guts became leaky.

But once you take away the trigger — e.g. stress — the junctions tighten back up, typically without any long-term issues. And it’s also true that if you have coeliac disease (which affects around 1 per cent of the population, causing the immune system to react to the protein gluten), your gut becomes leaky longer term — although once you take the gluten out, the leakiness starts to resolve.

But this reinforces the fact that leaky gut is a symptom or side-effect, not the cause of disease.

A flare-up in inflammatory bowel disease (IBD) can also cause temporary gut leakiness. In fact, my team at King’s College London is currently measuring gut leakiness as a symptom in one of our IBD studies, called the ADDapt trial, to see whether cutting out certain food additives from your diet can help improve IBD, especially Crohn’s disease.

So what if you do get caught out with a transient leaky gut after a big night out? Thankfully, even if a pathogen does make it through this first line of defence, our immune system is primed and waiting to pounce, triggering a cascade of events both within and outside our gut to shut down any invasions.

Now, despite all this science rather convincingly showing that a leaky gut is more of a symptom than a cause of disease, some people still claim that leaky gut syndrome is the root of a range of health problems, including brain conditions such as autism, and brain-related disorders such as ADHD and even depression.

Their theory is that a leaky gut allows toxins to reach the brain. There is even an eating plan for it: the ‘gut and psychology syndrome’ (GAPS) diet — essentially a restrictive diet recommending people cut out grains, dairy and starchy vegetables. 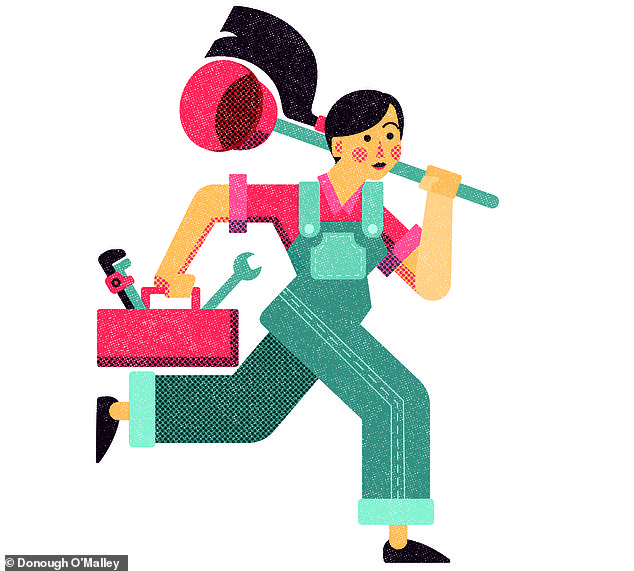 In fact, all of us get a slightly more permeable or leaky gut lining temporarily, without any health consequences. It can happen when we eat a high-fat meal or drink a little too much alcohol, for instance. Stress, too, is a common trigger

There are some pretty bold claims around the potential benefits of this diet (such as reducing ‘toxicity’ and ‘curing’ autism). But it’s all smoke and mirrors. There is no scientific evidence that following the GAPS eating plan has any health benefits. And a wide and varied diet is important throughout our lives, but particularly in childhood (when the GAPS diet tends to be suggested).

Restrictive diets can starve your body and your gut bacteria.

Take just one study, published in the prestigious journal Nature in 2018, which showed that a low-gluten diet followed by healthy people reduced some beneficial gut bacteria — demonstrating that cutting out foods can have knock-on consequences. (If you do choose to forgo gluten for whatever reason, just make sure you’re still including plenty of non-gluten wholegrains such as quinoa, buckwheat and popcorn.)

For a strong gut lining and good gut health, the goal is diversity, not restriction. Eating a diet rich in a variety of plant-based foods (including those demonised by the GAPS diet) supports the development of a more diverse microbiota (the organisms such as bacteria that live in our gut). And the more diverse our microbes are, the better for our overall health.

So my take-home message from all this is: gut leakiness, when it occurs, can be seen more as a symptom or an effect of something else, not a syndrome.

If you’re getting ongoing gut symptoms, check with your GP first to rule out other conditions such as coeliac disease, irritable bowel syndrome or inflammatory bowel disease.

No need for a fancy ice cream machine, this combo draws on the creaminess of bananas and the richness of thick live yoghurt to deliver gut goodness on a stick. (Makes six to eight lollies)

2 Medjool dates, chopped and stirred into a paste with 1 tbsp boiling water

Place base ingredients in a blender and blitz until smooth. Add toppings into the base mix and roughly blitz to desired texture. Spoon into lolly setting moulds and place in the freezer for at least four hours.

Once they are set, warm the dark chocolate in the microwave for 40 to 60 seconds, stirring every 15 seconds until melted. Place the lollies on a lined baking tray and drizzle over the chocolate.

I’m about to have my Covid booster. Can diet help?

The simple answer is yes, it probably will. While the role of diet hasn’t been studied specifically with the Covid-19 booster vaccine (because it’s so new) in mind, it has in relation to other vaccines, such as one for pneumonia.

In one study, healthy, older volunteers (aged 65 to 85) who ate two portions or fewer of fruit and veg a day were divided into two groups — one group continued their normal, low fruit-and-veg diet while the other ate five or more portions a day. Both groups were given the same vaccine, but guess what? The five-plus a day group had a bigger positive response to the vaccine.

Admittedly, the vaccine (Pneumovax II) was tested in older age groups, so we can’t extrapolate the results to all vaccines and all people. But this is all the convincing I need to recommend everyone consider boosting their plant intake before any vaccines.

Dr Megan Rossi cannot enter into personal correspondence. Replies should be taken in a general context; always consult your GP with any health worries.