DR MICHAEL MOSLEY: Beat pain and dodge the flu… all with a little dip in the sea

Most of the country has been sweltering over the past week. But – sorry about this – I have been lucky enough to be on holiday in Dorset, enjoying some lovely cool sea breezes. Being on the South Coast also means that I have been able to swim in the Channel every single day.

I love swimming in the sea – but I am always surprised by how many people go to the beach without actually getting in the water.

If you are one of them, let me gently encourage you into the big blue by telling you about some of the many health benefits of sea bathing.

Cooling off: Michael Mosley goes for a swim off the glorious Dorset coastline last week

IT WON’T BEAT SCURVY – BUT IT REDUCES PAIN

One of the first British doctors to get enthusiastic about the medical potential of sea bathing was Dr Richard Russell, an 18th Century British physician.

He not only encouraged his patients to swim in the ocean, but he also urged them to drink lots of seawater, which I suspect did them no good at all. He claimed that having a swim, followed by a cup of the briny stuff, would cure jaundice, leprosy, scurvy and a whole host of other diseases.

Most of his claims were clearly nonsense, yet Dr Russell was on to something. One major proven benefit of outdoor swimming is on mood. Obviously, it’s good exercise – and doing any exercise is likely to make you feel better.

But there is plenty of evidence that swimming in cool water (or having a cold shower) activates temperature receptors under your skin, which in turn leads to the release of hormones such as endorphins and adrenaline. Endorphins are our natural painkillers.

This may explain why swimming in cold water has been shown in some studies to reduce symptoms of the chronic pain conditions fibromyalgia and rheumatoid arthritis.

The release of endorphins and adrenaline also helps explain why swimming in cold water seems to have an impact on depression and anxiety. There are lots of people who swear by the mental benefits of cold water, including a friend of mine, Dr Chris van Tulleken. He practises what he preaches by going for regular cold-water swims, even in winter.

He told me that after even a fairly brief cold-water swim, he feels elated for hours and calm for several days afterwards. 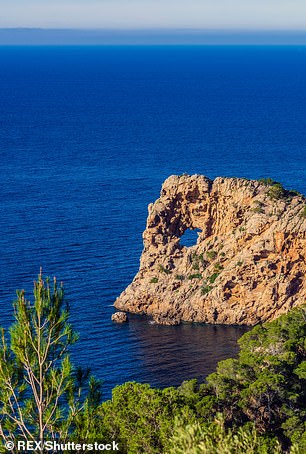 There is plenty of evidence that swimming in cool water (or having a cold shower) activates temperature receptors under your skin, which in turn leads to the release of hormones such as endorphins and adrenaline (pictured: Baleares, Mallorca)

Chris recently published in the British Medical Journal the case of a 24-year-old woman called Sarah, who had been taking antidepressants since the age of 17. After the birth of her daughter, Sarah wanted to try being medication-free so, under guidance, she began a programme of weekly cold-water swimming.

This led to an almost immediate improvement in her mood and a sustained and gradual reduction in her symptoms of depression.

Over time, she was able to come off all medication, and two years after starting the swimming therapy, she remains medication-free, although she still has counselling. Of course, this is simply one person’s experience, and no one who has been prescribed medication should make any changes without medical advice.

But further evidence of the benefits of cold-water immersion came from a French study in which they recruited 237 patients with generalised anxiety disorder, and randomly allocated them to either eight weeks of regular attendance at a spa or a standard antidepressant. Both groups improved, but those attending the spa did better in both the short and longer term.

I find the buoyancy I get from swimming in the sea has a calming effect on my brain. I just enjoy floating, living in the moment. I also love the glow you get afterwards, plus the satisfaction that comes from having done something a little bit challenging.

When I was swimming in the sea earlier today, I heard one middle-aged woman urging another to come into the water ‘because you need to give your immune system a jolt’.

My husband is 82 years old and needs to lose a lot of weight. He suffers from painful knees, and one is a replacement, so he can’t do intensive exercises. He loves cakes, puddings, sweet treats and fruit but doesn’t like vegetables much. How can he slim down?

Your husband’s situation is a common one. Since he is 82, avoid making drastic changes. The best thing to do is cut back on the sweet stuff and increase fibre content, as this is associated with lower risk of some cancers and heart disease. Try sneaking in some fibre-heavy dates into his puddings, or adding pulses such as kidney beans to meals.

As for exercise, encourage him to walk, even if it’s just around the garden or to a local shop.

Alternatively, try swimming, as it is kinder on the joints and has the benefits that I’ve explained above.

It sounds plausible, but how strong is the evidence? Not massive, is the answer. There have been plenty of animal studies, but few looking at the impact of cold water on the immune system in humans.

The only one I could find was a study carried out in Holland a few years ago. Researchers recruited more than 3,000 people and randomly allocated them to having a cold shower every morning for a month, or to a control group.

Some of those who were allocated to having a cold shower were asked to endure it for 30 seconds, while others were asked to tough it out for a full 90 seconds.

Once the month was up, the volunteers were offered the chance to stop or carry on with cold showers for 30 more days. Impressively, 80 per cent them willingly carried on. And it really did seem to have a beneficial impact on their immune system.

By chance, while they were conducting this study, there was an outbreak of the flu in Holland.

And this turned out to be a good test, because the people having the cold showers were 30 per cent less likely to take time off for sickness than those in a control group. And the 30-second blast of cold water gave the same benefits as sticking to it for a full 90 seconds.

BUT TAKE TIME TO BUILD UP CONFIDENCE

Every year there are stories of people jumping into rivers or lakes to cool down on hot days and then drowning.

If you are not used to the temperature of the water, your first, involuntary reaction to jumping in will be to take a gasp of air, and if you are underwater at the time this can be fatal.

If you plan to go cold-water swimming, to start with don’t go alone. And make sure you go into the water somewhere shallow, such as at the beach.

DO YOU HAVE A QUESTION FOR DR MOSLEY?

Don’t just jump into a river, particularly if you have been drinking. Start off by gradually going into the water for just a few minutes. You can build up, and as you do, your tolerance will develop.

You can find out more about how to swim safely outdoors from the Outdoor Swimming Society (outdoorswimmingsociety.com) or Wild Swimming UK (wild swimming.co.uk). For places to go, take a look at the Wild Swim map (wildswim.com) or visit the RNLI website (rnli.org).