DR MICHAEL MOSLEY: Ditch that probiotic pot, get your friendly bacteria from SAUERKRAUT

Yogurts can help cut the risk of heart attacks

Probiotics, the living microbes you can find in fermented foods, fortified yogurts, or take in pill form, are now a multi-million-pound business. There is a lot of hype around these ‘friendly bacteria’, which are supposed to benefit digestive health and even boost immunity, but also some doubts about their effectiveness.

Scientists are increasingly aware of how important the microbiome – the 40 trillion or so microbes that live in our guts – is for our mental and physical health.

It’s something I’m very interested in, and my most recent book, Clever Guts, was all about this subject.

But the experts I spoke to while researching it were sceptical about many of the probiotic products out there, particularly so-called probiotic yogurt drinks. These mini-bottles claim to deliver huge doses of beneficial bacteria to the digestive system. But does that actually do us any good?

Certainly, when European Food Safety Authority scientists looked at some of the health claims that manufacturers put forward, they were not convinced.

That’s why if you visit the websites of leading brands such as Yakult or Actimel, you will see they mention their products contain lots of wonderful bacteria, but they are careful not to make specific health claims.

To add to this, a recent study by Israeli scientists found that while some people responded well to probiotic supplements, others did not.

Volunteers agreed to have endoscopic tubes inserted inside them so that the scientists could measure the effect on the digestive system of taking probiotics in pill form.

It turned out that while some people’s guts happily accepted incoming bacteria, others immediately rejected them – and they simply passed out of the body. 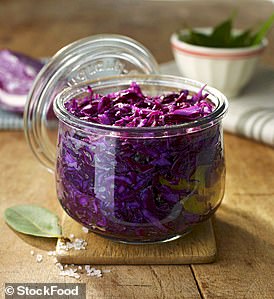 Cram the veg and its juice into the jar. Press with a spoon to squeeze out any air and submerge it in its juice. The juice level should be about an inch below the top of the jar and half-an-inch above the veg. You can top up with brine, made with 1 tsp salt dissolved in 200ml of bottled still water.

To keep the veg submerged, place a glass or ceramic object on top of it. Close with a well-fitting lid and place on a tray (in case there is any overflow) out of the sun.

Allow to ferment at room temperature for three to 14 days. The longer you leave it, the softer the veg and the stronger the flavour. If it goes black in places at the top, remove those bits. Store in the fridge.

No one knows why, but it could be down to our personal genetics, or perhaps the mix of microbes that are already down there.

I avoid all such products, not least because they tend to contain sugar or sweeteners. Too much sugar is bad for your teeth and your waistline, while there is recent evidence that some artificial sweeteners can cause inflammation in the guts. But I do think there are benefits to consuming foods that naturally contain probiotics. And the best natural sources of these are fermented foods.

HOW TO GET A HEALTHY DOSE OF GOOD BACTERIA

A fermented food is created by adding bacteria or creating an environment where it can flourish. This bacteria multiplies and converts the naturally occurring sugars, such as glucose, into other compounds.

Yogurt and cheese are familiar fermented foods, but there are plenty of others, including kefir (a form of fermented yogurt), kimchi (fermented vegetables), sauerkraut (fermented cabbage) and kombucha (fermented tea).

The sort of ‘good’ bacteria that fermented foods contain include bifidobacteria and lactobacillus.

These bacteria also live in our large bowel or colon and turn fibre into something called short chain fatty acids. These in turn can reduce inflammation and help maintain a strong gut wall, which prevents microbes escaping from our guts into our blood.

One of the challenges for probiotic bacteria is to survive the acid bath of the stomach and the journey down the gut to the colon.

The great thing about the microbes you find in fermented foods is that they are both plentiful but also extremely resistant to acid, as they have been reared in an acidic environment. That is why they taste quite sharp.

To make sauerkraut, for example, you chop up cabbage and submerge it in a clean jar containing purified water (not tap water) and some salt.

If you don’t fancy sauerkraut, then just about everyone can enjoy yogurt.

An American study, which followed more than 73,000 people with high blood pressure, found that higher intakes of yogurt were associated with a 30 per cent reduction in risk of heart attack or stroke, which the researchers linked to the probiotic content.

Be warned though: flavoured or low-fat yogurts tend to be high in sugar. Go for a full-fat natural variety instead, and sweeten with fruits, or scatter nuts, flaxseeds and cinnamon.

And if you’re feeling adventurous, why not try some kefir, a fermented milk drink which is becoming increasingly popular. It’s similar to yogurt but it has a rather sour taste and a slight ‘fizz’. That’s because the microbes produce carbon dioxide.

DO TRY THIS AT HOME

Although it sounds intimidating, it is really easily to make your own fermented foods.

My wife, Dr Clare Bailey, who writes for The Mail on Sunday’s You magazine, is now a dab-hand at making sauerkraut – I’ve included her delicious recipe for red sauerkraut, right. I find it adds a nice zing to scrambled eggs, or else have it with cold meats.

My family also now enjoy knocking back her kombucha, a form of fermented tea, which I know sounds unappetising but is really refreshing when served chilled. Do give it a go.

That said, fermented foods are an acquired taste, so start slowly if you haven’t eaten these sorts of food before.

I get frustrated when reading about reversing type 2 diabetes with a low-calorie diet. My husband is a ‘skinny diabetic’ – he is 5ft 7in and weighs 9st 4lb. If I put him on a low-cal diet he would disappear, so what are his options?

The risk of developing type 2 diabetes is lower if you are slim, but it does happen. Skinny diabetics would undoubtedly benefit from a balanced, Mediterranean diet that is low in starchy carbs such as bread and pasta, and high in veg, grains, nuts, seeds, oily fish and olive oil. Regular exercise will help too.