Regular readers of this column might wonder if I am ever so slightly obsessed with the microbiome, the billions of tiny creatures that live in our guts — and you’d be right.

I’m fascinated by these extraordinary microbes, and the ongoing battle between the ‘good’ and the bad’ ones, that influences so much about us, from our weight to our mood.

Raised blood pressure or ‘hypertension’ is known as a silent killer because it kills so many people without them ever realising they have it.

Blood pressure is normally lowest at night when you’re sleeping, then starts to rise a few hours before you wake up, usually peaking in the middle of the afternoon

In the UK, hypertension is responsible for at least 75,000 deaths every year, as well as more than 100,000 strokes. If you know anyone who’s had a severe stroke then you’ll be aware just how disabling it can be.

The good news is that if you are hypertensive, or just borderline, then a small drop in your blood pressure of just 5 per cent can cut your risk of heart attack or stroke by 13 per cent.

And, surprisingly enough, a recent study suggests that one of the best ways to reduce blood pressure is by doing a short fast, which then boosts levels of ‘good’ bacteria in your gut.

I feel passionately about the dangers posed by raised blood pressure because two close friends — both younger than me — died as a result of untreated hypertension. I also have a strong family history of heart attacks and strokes, so I am at significant risk.

I keep a portable blood pressure monitor at home (you can buy them for less than £20 from a chemist or online) and I test myself at least once a month.

Your blood pressure is a measure of how hard your heart has to work to drive blood around your body. Mine hovers around 125/75, depending on the time of day and how stressed I am feeling. 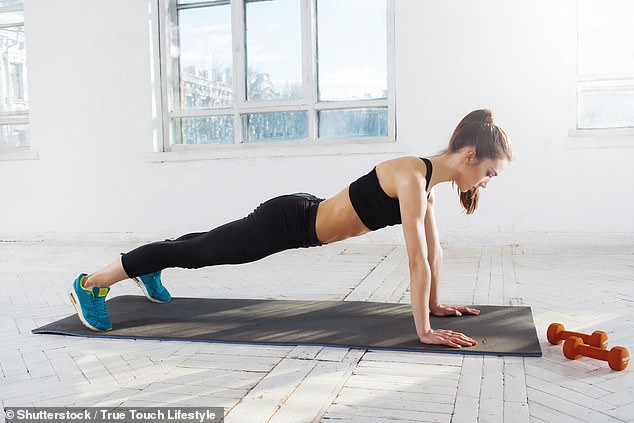 A third of British adults are hypertensive, rising to half of those over 65 (I am 64).

But unless you’ve been tested you won’t know because there are rarely any symptoms. The problem is that high blood pressure puts excessive strain on your blood vessels, your heart and other organs, including your brain and kidneys.

A recent major study, published in the journal Hypertension, showed that even if your blood pressure is a little raised (where the first number, your systolic blood pressure is above 120), you’re at increased risk of dementia and cognitive decline, with the risk rising sharply the higher the number.

Blood pressure is normally lowest at night when you’re sleeping, then starts to rise a few hours before you wake up, usually peaking in the middle of the afternoon.

That’s why the best time to measure it is first thing in the morning, before breakfast, or last thing at night. Apart from medication, losing weight can help reduce blood pressure because your heart doesn’t have to work as hard to pump blood around your body.

If you are a smoker, give up — because that will improve blood flow. Doing more exercise will have a similar effect.

And consuming less salt also seems to help, though no one really knows why. But what if you have tried all these things?

Well, perhaps you could also try five days of fasting, to help reset the bacteria in your gut that may be causing your blood pressure to be higher than it should be.

That, at least, seems to be the conclusion of new research from the Max Delbruck Centre for Molecular Medicine in Berlin in Germany.

Published in the science journal, Nature Communications, this study involved 71 overweight volunteers with raised blood pressure who were randomly allocated to two groups — both were asked to eat a healthy Mediterranean-style diet (plenty of nuts, fruit, vegetables, oily fish and lean meat) for three months, but one group also started with a five-day fast, eating just 350 calories a day.

T hroughout the experiment the researchers took regular poo samples, to see what impact these dietary changes were having on their volunteers’ gut bacteria. Fascinatingly, the fasting group had massively boosted levels of certain ‘good’ bacteria that produce powerful anti-inflammatory compounds.

The really striking finding was that this group experienced far more benefits: they not only lost more weight, but their blood pressure improved so much that nearly half were able to dramatically reduce their medication.

The scientists put this improvement down to the anti-inflammatory compounds produced by the fast.

If you’re tempted to try something similar, talk to your doctor first — particularly if you are on medication. Sticking to 350 calories a day, even if it is just for five days, is challenging. I’ve tried it, and the effects were impressive, but it was tough.

You might find my 5:2, intermittent fasting approach (where you reduce your calories to 800 just two days of the week, then eat normally), less demanding.

A randomised trial carried out a few years ago by researchers at Surrey University, comparing the 5:2 diet to a standard diet, found the former was significantly better at reducing blood pressure.

Most mornings I force myself to do resistance exercises, mainly in the form of press-ups and squats. I do them to keep in shape, but also because of a study I once read which revealed that firefighters who could do 40 or more press-ups in their early 40s were 96 per cent less likely to have a heart attack or stroke over the following decade than those who managed fewer than ten.

But recently I learned I’ve been doing them wrong! It’s not about going as fast as possible — you need to do them slowly, pausing for a few seconds between each movement, as this is a more effective way to build muscle and increase blood flow to the brain, which is a good thing.

It is also much harder work!

Who you choose to eat with matters

Last weekend I had my first meal out of the year with my wife and two friends. We were shivering together in the garden of a local pub, but even so it felt almost like being back to normal.

The pub garden was packed and people were certainly making the most of their new-found freedom to order huge piles of food.

And that, of course, is the danger when you eat out with other people. You eat and drink far more than if eating alone, or at home.

Research has shown that when people eat together, the amount they eat goes up by as much as 48 per cent.

Why? The most obvious reason is because you want to fit in. You order that starter, even if you don’t really want it, because you’re trying to keep up with everyone else. You end up eating to the level of the hungriest member of the group.

The exception is when you’re eating out with a comparative stranger, such as on a first date. Then you hold back as you don’t want to appear greedy.

It’s not just how much but what you eat that’s strongly influenced by others. In a recent U.S. study, researchers tracked the eating habits of more than 6,000 medical staff and found their food choices when they ate together in the hospital canteen tended to mirror each other. If one ate healthily, so did the other; if one ate junk food, the other saw this as ‘permission’ to do the same.

Mark Pachucki, a professor of sociology at the University of Massachusetts who ran the study, suggested that ‘if your eating habits shape how your co-workers eat then switching food choices for the better might benefit your co-workers as well’. Something to bear in mind with the return to work!