DR MICHAEL MOSLEY: Onions, brisk walks and zinc tablets – how to fight off flu before it gets you

Chilly winter nights are on the way – and with that comes the huddling together of bodies and the inevitable spread of the nasty germs responsible for colds and flu.

Surprisingly, it is not the freezing weather itself that causes illness, but being confined in small, inside spaces with others infected with a bug. Come November, we’re much more likely to lounge on a sofa than breathe in fresh air at a local park.

There is mounting evidence that what you eat influences the body’s ability to fight viral infections, including flu and the common cold. This is because it alters the mix of microbes, called the microbiome, that live in your gut. Boosting the trillions of good microbes can help you fight off infections and increase the efficacy of the flu vaccine, which is estimated to be ineffective for almost a third of older adults.

One scientific review concluded that boosting the ‘good’ microbiome by taking a prebiotic or probiotic before having a flu jab doubled the chance the vaccine would work.

Prebiotics are a type of carbohydrate that do not get digested and so are able to reach the gut to feed the ‘good’ microbiome, helping them to thrive. They are available in supplement form, but also in foods such as garlic, onions and oats. As these foods are digested and the microbiome is ‘fed’, chemical signals trigger a reduction in the inflammation of cells, helping the body fight infections.’

5:2 recipe of the week: Butter bean and chorizo stew with steamed greens 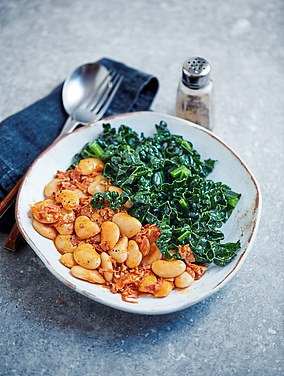 Stir-fry for 30 seconds, then add a 400g can of butter beans, rinsed and drained, 300ml low-salt chicken stock and some seasoning.

Bring to a simmer and cook for 20 minutes.

Steam 100g shredded cabbage for 3 minutes, then toss with a tiny dash of olive oil and some seasoning and serve alongside the stew.

Probiotics are live bacteria found in fermented foods such as yogurt, sauerkraut and kimchi. They are another source of vital nutrients for the microbiome, encouraging their growth.

When a virus invades the body, the microbiome kills cells infected with it and increases the production of antibodies – proteins that destroy viruses and bacteria. Some good bacteria also binds directly on to the white blood cells of the immune system making them more active. This accelerates the power of the flu vaccine, which programmes the immune system to ‘attack’.

A review by medical research charity Cochrane concluded that taking probiotics in supplement form halves the risk of coming down with a cold or infection. The same effect can be achieved with food – studies on mice show eating a daily dose of lactobacillus, extracted from fermented vegetables, reduces flu-type symptoms.

Adopting a Mediterranean diet, rich in beans, wholegrains, nuts and oily fish, can have a similarly protective effect.

Take a walk in the park

IT might not seem tempting when it’s cold and wet outside, but regular brisk walks will boost your immune system and halve your risk of developing a cold or throat infection. A study published in the British Journal Of Sports Medicine found walking for just 20 minutes a day was enough to produce this protective effect.

This is because aerobic exercise causes an increase in naturally occurring proteins called immunoglobulins, which fight harmful, foreign cells. Another study published in the journal Scientific Reports found regular swimming sessions trigger the immune system to detect destructive cells that come from outside the body.

For a remedy, think zinc

WHILE washing your hands is certainly effective for destroying viruses before they enter the body, other remedies such echinacea and Vitamin C are not.

One review looked at 29 studies and calculated the odds of participants developing a cold while taking a daily dose of Vitamin C.

The supplement was found to have no effect on the likelihood of developing a cold, except if participants were marathon-runners. Even then, the effect was only seen in those taking at least 200mg a day – the equivalent of four oranges.

Thousands swear by the herbal supplement echinacea to curb colds. But according to science, it is relatively useless. A University of Wisconsin study found no difference in the number of colds between those who took it and those who took a sugar pill.

Email drmosley@mailonsunday.co.uk or write to him at The Mail on Sunday, 2 Derry Street, London W8 5TT. Dr Mosley can only answer in a general context and cannot give personal replies.

Zinc supplements, on the other hand, really do seem to work to reduce the length of colds, and prevent them. Researchers from the University of Alberta found that children who took 10 to 15mg of zinc daily were less likely to miss school due to a cold, than those took no supplement.

Another study concluded that zinc acetate lozenges cut the duration of a cold from seven days to four. It is believed zinc ‘coats’ viruses, stopping them entering the body through the lining of the nose (consult your GP as zinc supplements can interact with some prescription drugs). Otherwise, a gut-friendly diet and exercise are your most valuable weapons. 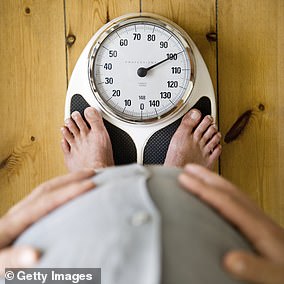 One man wants to know if he can increase his calorie count on the 5:2 diet as he is much larger than his wife, file photo

My wife and I are following your 5:2 diet together but I am considerably larger than her and get hungrier on fast days. Does the 800-calorie rule apply to both men and women, regardless of build?

Embarking on any new, healthy-lifestyle regime is always easier when done in pairs. Having someone to cheer you on and keep up enthusiasm is often the reason for effective long-term change, when all else has failed.

The 800-calorie rule does apply to people of all genders and all sizes.

This is because for everyone, 800 calories is low enough to trigger the advantages of fasting, including improved insulin sensitivity and regulation of blood sugar, but not so low that people struggle and eventually give up.

I wouldn’t recommend upping your limit as you may not experience the same benefits – try to stick with it.

You’ll be pleased to know your body shape will change faster: those who are larger are likely to lose weight more rapidly than those who are smaller.