An Arizona drag queen has accused a Republican gubernatorial candidate of hypocrisy after she spoke out against children attending drag shows – but reportedly once had the drag queen perform at her home in front of her young daughter.

Kari Lake, a Trump-backed Republican candidate for governor, retweeted a video earlier this month showing a drag queen performing in front of kids in Texas, writing: ‘This is grooming. This is child abuse. Maybe that’s acceptable in Dallas, Texas. But it will not be tolerated in a @KariLake-led Arizona.’

Then on Saturday, she tweeted her dismay with schools hosting drag shows writing: ‘They kicked God out of schools and welcomed the Drag Queens.

‘They took down our flag and replaced it with a rainbow. They seek to disarm Americans and militarize our enemies.

‘Let us bring back the basics: God, Guns and Glory.’

But soon after, Rick Stevens, one of the area’s best known drag artists who goes by the name Barbra Seville at theaters, bars and parties, says he has held parties at Lake’s home.

He posted photos to his social media of Lake posing with him and other drag performers – and similar pictures, dated 2012 and 2014, are posted to Lake’s social media. They were captioned: ‘Half of what I know about makeup, I learned from watching friends like @BarbraSeville.’

Stevens also told Arizona Central how Lake invited him to her central Phoenix home to perform as Marilyn Monroe at her birthday party about 10 to 12 years ago, and specifically remembers Lake’s then elementary school-aged daughter in the audience because she was wearing glasses at the time.

He said he sympathized with her because he hated wearing glasses as a child.

‘She’s friends with drag queens,’ Stevens said of Lake. ‘She’s had her kid in front of a drag queen. I’ve done drag in her home for her friends and family.

‘She’s not threatened by them,’ he added. ‘ She would come to shows constantly.

‘To make me the bogeyman for political gain, it was just too much.’

Still, Lake’s campaign denied that her daughter ever attended a drag show.

‘Richard’s accusations were full of lies,’ she said in a statement to Arizona Central.

‘The event in question was a party at someone else’s house and the performer was there as a Marilyn Monroe impersonator. It wasn’t a drag show, and the issue we’re talking about isn’t adults attending drag shows either.

‘The issue is activists sexualizing young children, and that’s got to stop.’

Rick Stevens, one of the best-known drag performers in the Phoenix, Arizona area, posted photos of Kari Lake posing with drag queens after she tweeted her dismay with drag performances. Lake is pictured left wearing a t-shirt advertising Stevens’ drag show, with drag performer Celia Putty 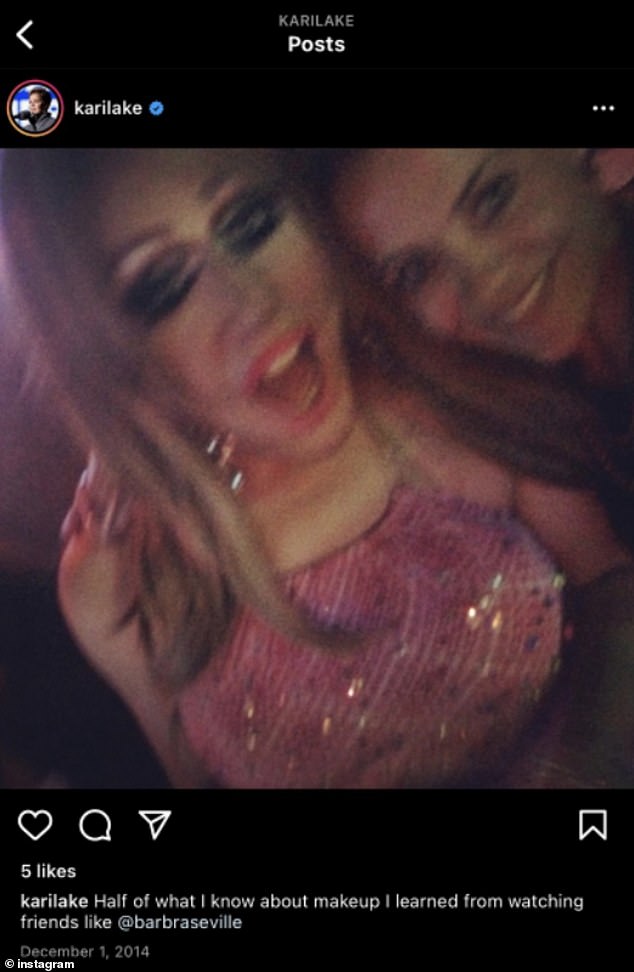 Other photos of her with drag performers were posted to Lake’s own Instagram account, writing: ‘Half of what I know about makeup I learned from watching friends like @barbraseville’

She tweeted on Friday: ‘They kicked God out of schools and welcomed the Drag Queens’

Stevens claims Lake was a regular at drag shows back in the 1990s, when she was an anchor on FOX 10 News, and she and some of her coworkers would come to the 307 Lounge, a downtown Phoenix gay bar that hosted drag shows.

‘They would come down to the 307 Lounge, which was about a mile or two from the station, and they would hag out,’ Stevens said, adding: ‘She would come to the show pretty regularly. I wouldn’t say every week, but it wasn’t uncommon.’

Eventually, he said, they became friends, and he became her ‘go-to gay person’ for interviews on news stories related to LGBTQ issues.

‘So to see her just throw me under the bus for a vote, that’s why I had to say something.’

‘I spoke up because her alarming rise to power under these new “views” are scary and can lead to real harm to me and other marginalized people,’ he added to Business Insider.

And in a Facebook post, Stevens – as Seville – wrote: ‘Kari was a friend of mine, and I stood by her when she turned to the right.

‘I reached out (and she responded repeatedly) when she took a public drubbing.’

But Stevens now says Lake is just pretending to be a warrior for the far right.

‘She supported Obama, and now I’m here to tell you that she supported drag queens, and had her kid in front of drag,’ he told Arizona Central.

Meanwhile, Lake’s campaign continues to deny these allegations, telling the Arizona Republic that she ‘is pursuing legal action, and anyone that prints those lies should be prepared for a legal fight.’ 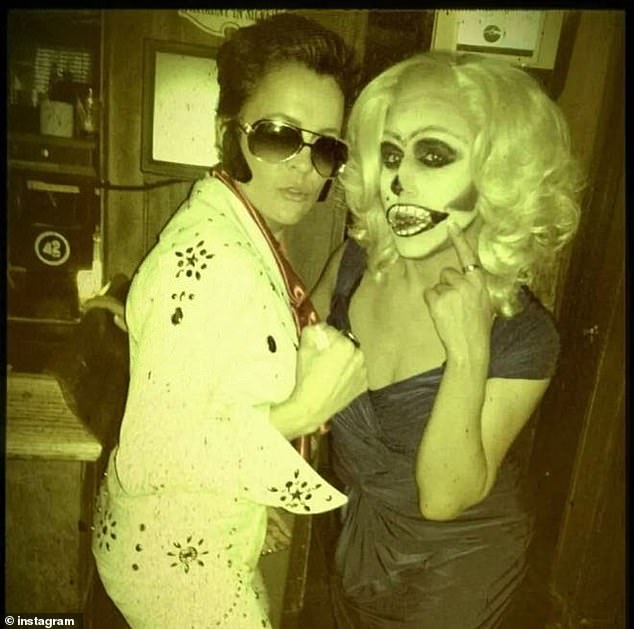 Kari Lake, dressed as Elvis, posed with Barbra Seville, in a photo from 2012. Her campaign now claims that Seville’s performance as Marilyn Monroe at one of her birthday parties was not a drag show, and there were no children present 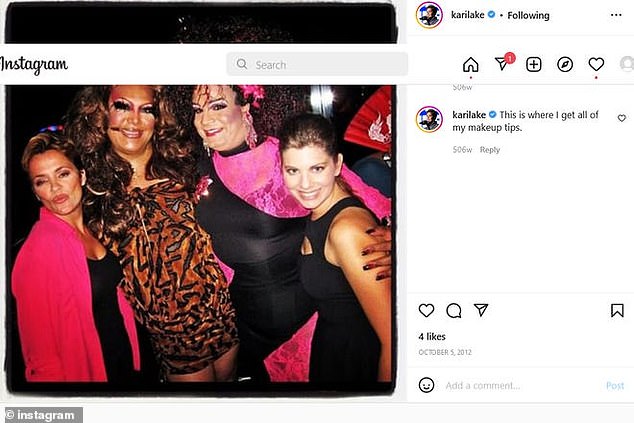 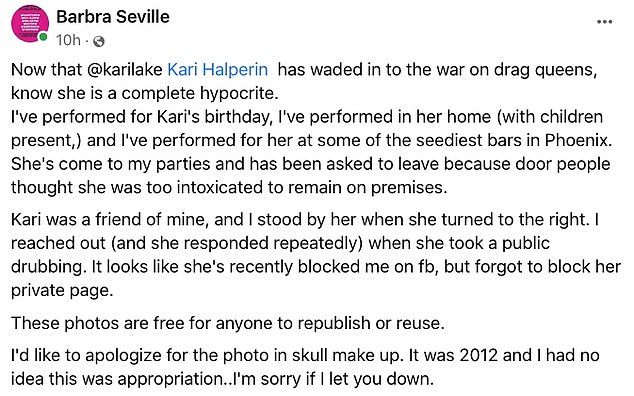 In a Facebook post, Stevens – as Barbra Seville – wrote that he supported Lake when she turned to the right

The issues of drag queens performing in front of children has become contentious over the past few weeks as conservatives claim young children are being exposed to inappropriate content by their well-meaning family members and educators in the name of support for LGBTQ equality.

It came to a head earlier this month after video was posted online showing children and their parents clapping and dancing to an Ariana Grande song as drag queens passed by at the Mr. Misster club in Cedar Springs, Texas – a suburb of Dallas.

The event was dubbed ‘Drag Your Kids to Pride,’ and was advertised as a ‘family friendly’ edition of its weekly drag brunches.

In the wake of the video, a group of men allegedly part of the Proud Boys stormed a Drag Queen story time at a San Francisco library shouting homophobic and transphobic threats.

Several of the men wore shirts emblazoned with assault rifles as they barged into the library last week, hurling insults at the act Panda Dulce as he read to kids who were only in preschool and kindergarten during the controversial event.

Kyle Chu, who performs as Panda Dulce, who hosted the story hour, posted on Instagram that the group disrupted the event, shouting ‘tranny’ and ‘pedophile.’ 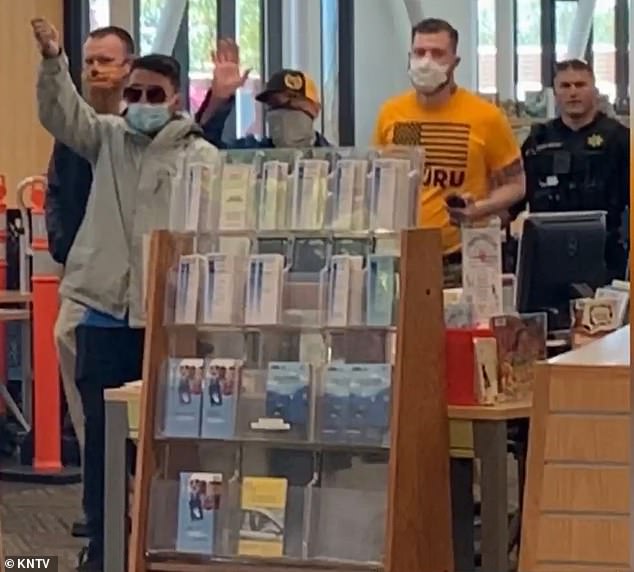 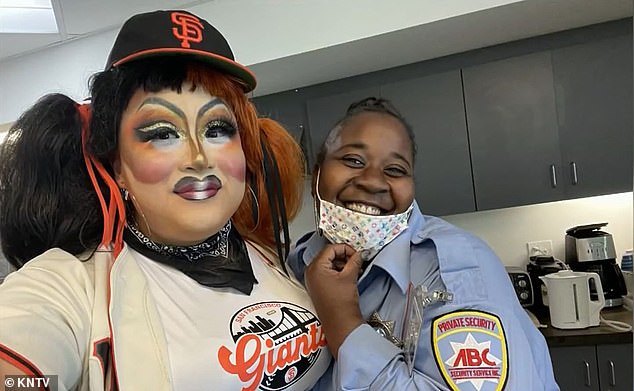 Drag Queen Story Hour, a nonprofit, was started in San Francisco in 2015 by activist and author Michelle Tea. Chapters have since opened across the U.S. and elsewhere. Other organizations with readers in drag have also formed.

As part of Drag Queen Story Hour’s programming, drag queens read to children and their parents at libraries, bookstores, fairs, parks and other public spaces to celebrate reading ‘through the glamorous art of drag.’

In New York City, officials have spent more than $200,000 on Drag Queen Story Hours since 2018, and just last month, records show the city paid $46,000 to send Drag Story Hour NYC to public schools, libraries, and street festivals, according to the New York Post.

Some parents say the programs were booked without their consent, while city officials have responded with outrage, according to the Post.

The organization characterizes itself as promoting inclusivity, creativity, and acceptance of the self in children, by exposing them to drag queens reading similarly thematic books.

‘Through fun and fabulous educational experiences, our programs celebrate gender diversity and all forms of difference to build empathy and give kids the confidence to express themselves however they feel comfortable,’ the website reads.

Images from the site show people dressed in bedazzled dresses, shimmering wigs, and heavy eye shadow, reading to young children in classroom, and even helping the kids apply makeup themselves.