New Zealand band Dragon has slammed Scott Morrison for playing their hit song April Sun in Cuba on the ukulele during a media run prior to the federal election.

The prime minister and his family sat down with 60 Minutes for a behind-the-scenes exclusive interview with host Karl Stefanovic that aired on Sunday.

At one point, Mr Morrison pulled out the instrument to serenade the journalist, his wife, and two daughters, at the dining table with his ukulele rendition of 1977 classic.

But the performance has drawn ire from the song’s creators, who issued a scathing statement on Monday labelling the sing-a-long a political move. 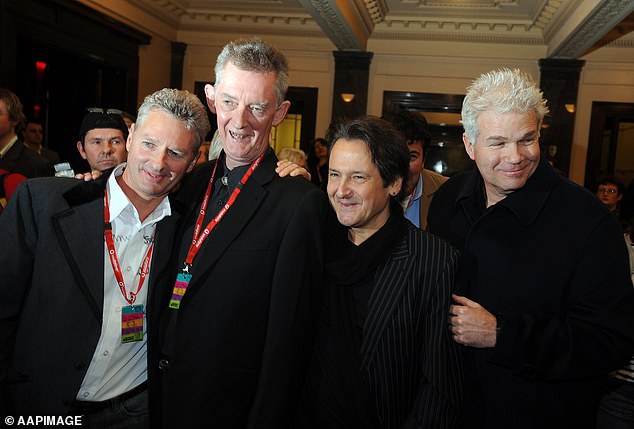 ‘Like many times before, Dragon is back in the headlines for all the wrong reasons,’ the statement begins.

‘This time it’s the Prime Minister of Australia’s interpretation of April Sun in Cuba, written by two New Zealanders (Paul Hewson, Marc Hunter, both since passed), living in Australia about a long-ago diplomatic fracas on the other side of the world.

‘It is a cynical move for a politician to co-opt music in an attempt to humanise themselves come election time.’

The rock band then made a brutal swipe at the prime minister’s notorious holiday to Hawaii during the nation’s Black Summer bushfires in 2019-2020.

The family were forced cut their trip short with Mr Morrison copping heavy public backlash upon on his return home for leaving while the nation was in the grips of one of its most catastrophic bushfire seasons.

In a double blow, the musicians also shared a satirical video of the prime minister’s original performance on their Instagram, edited to show Mr Morrison playing as bushfires rage behind him. 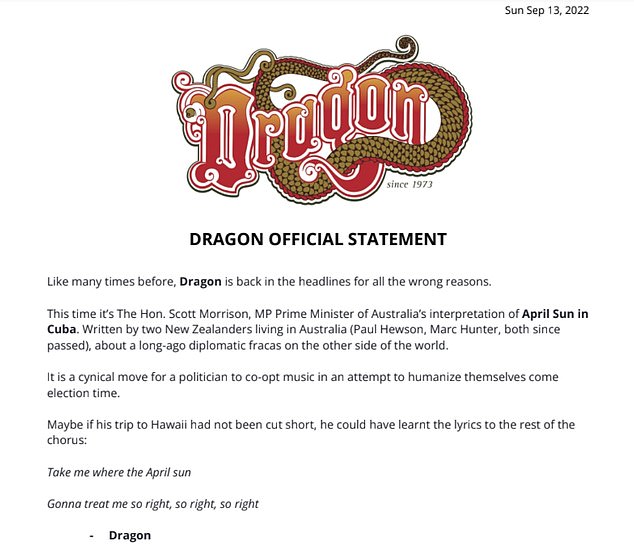 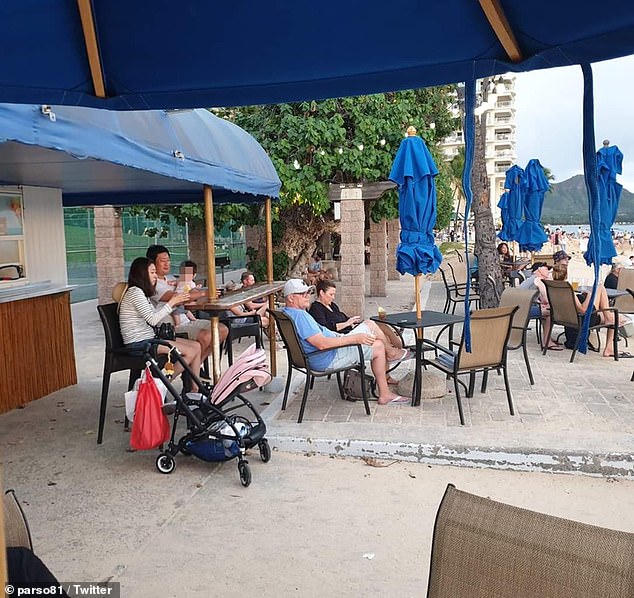 Jenny Morrison now regrets the family vacation to Hawaii during the Black Summer bushfires (pictured, the couple together at a cafe in Hawaii as outrage brewed back home)

The remake left their fans amused, with dozens posting laughing emojis in the comments.

Mr Morrison raised eyebrows after he whipped out his miniature guitar – the national instrument of Hawaii – during the pre-election interview.

Australians quickly flocked to social media point out his choice of instrument was a poorly-timed reminder of the ill-fated trip.

‘Did nobody on the team see Scott pick up the ukulele, go “national instrument of Hawaii”, and make a dive for it before cameras rolled?’ one man wrote.

‘Morrison made people angry when he p***ed off to Hawaii while the country burned, and then tries to play ukulele, an instrument synonymous with Hawaii, to win people over,’ another added.

The family also addressed the saga during the Channel Nine program, with Jenny Morrison apologising and expressing regret over ‘disappointing’ the Australian public.

‘I am more than sorry if we disappointed,’ she told 60 Minutes’ Karl Stefanovic on Sunday night.

‘We did disappoint. Did we make the right decision? I thought I was making the right decision for my kids. I obviously was wrong. Yes, we were over there seeing it and we were like… we really need to get home.

‘So…I wish that had never happened. But I can’t change it.’