When Steven Bartlett was 16 he managed to convince a local business to supply vending machines to his school for free. He took a 20 per cent cut.

Now, 13 years later, he is a multimillionaire who next month will become the youngest ever investor on BBC television show Dragons’ Den.

With a podcast, book, various investments and a new marketing business, he clearly a man with ambition.

He talks to This Is Money about the importance for budding entrepreneurs of building a personal brand and why he believes the labels used to describe him are reductive.

‘Asking for stuff is underappreciated’

It’s clear Bartlett had an entrepreneurial streak long before the success of his now multimillion marketing agency The Social Chain.

He recalls how quickly it was to get a local vending machine business to supply his school when he was 16.

‘We had 2,000 students in the school, I thought surely vending machines should be paying us to put their machines here? I went to the computer room, I emailed five companies… by that lunchtime a local vending machine company had sent a guy out’.

Two years later he rang Samsung asking for £10,000 worth of camera equipment. Surprisingly he was sent it.

‘I think asking for stuff is very underappreciated… I’m not going to pretend it’s as hard as it used to be. If I call the boss of Huel and say ‘can you sponsor the podcast?’ he’s probably going to do it, right?

‘But I’ve always had that attitude, just asking for stuff. That’s how I got investors for my first business… I sent a couple of LinkedIn messages, a couple of emails. I see it as a numbers game.’

This confidence led to Bartlett founding social media content and marketing firm The Social Chain at the age of 21.

Within six years he had built it into an international agency which listed on the Dusseldorf Stock Exchange. He resigned as chief executive the following summer.

The Diary of a CEO

His departure from The Social Chain, in which he still holds a percentage stake, seems to have been a pivotal point for the entrepreneur.

‘I think once I left Social Chain, I learned a lot of lessons about how to build teams, how to delegate. I realised that also… I wanted to resist my labels.

‘We all label ourselves. What tends to happen is that people live out those labels for the rest of their life. I don’t believe that’s actually a healthy way to live in terms of the mind. I think it’s a form of imprisonment.

‘It tends to be the case that people adopt their label in line with their last achievement. So if they were the social media boss that’s what they then become for the rest of my life.

‘I think real freedom and real happiness and real living is exploring the full nature of who you are, artistically, creatively, professionally, in your relationships.’ 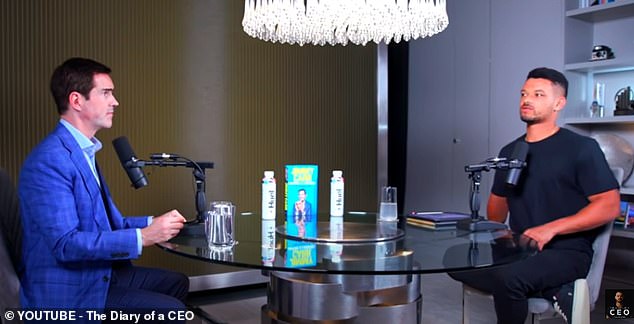 Bartlett is multidimensional and he wants people to know it.

Since leaving The Social Chain, he has pivoted his work into his core interests: content creating, investing and writing.

His podcast The Diary of a CEO, which he will take on a live tour next year, has arguably been his biggest success post-Social Chain. Just last week he inked a deal with British Airways to play the podcast on all of their flights.

Working with a team of 10, Bartlett has interviewed everyone from Klarna co-founder Sebastian Siemiatkowski and Deliveroo founder Will Shu to Love Island star Molly-Mae and comedian Jimmy Carr.

He has also interviewed this year Monzo founder Tom Blomfield and Starling founder Anne Boden and talked about the rivalry between the two.

‘This podcast is a really selfish pursuit to be honest, getting to meet trailblazers like the founders of some of the biggest companies in the world… It’s like the greatest honour of my life.’

The popularity of the podcast led to a recent partnership between Bartlett and Johnnie Walker Blue Label’s Keep Walking campaign which works with ‘leading innovators’.

This Christmas it has partnered with audio brand Bang & Olufsen to create a limited run gift set which encourages customers to listen to The Diary of a CEO.

Power of the personal brand

These types of partnerships are just another string to Bartlett’s bow. He is all too aware of just how powerful his brand has become.

‘Personal branding for me is digital reputation…We all know how important reputation is, I’ve seen that myself.

‘When I went to Logitech to pitch to them for a very big contract, 14 of the people in the room asked me for photos. I’m pitching to them and they want to take a photo… you can imagine it becomes much easier to secure a deal when your reputation got to the room before you did.’

But why is the personal brand so important for this new age of entrepreneurs?

I used to try and figure out where it was going. I wanted to be a happy, sexy millionaire. I wanted a Range Rover, a million quid, a girlfriend and a six pack… I got those things and then what? As I talk about in my book the anticlimax of it was really unfulfilling.

Bartlett sees it as an extension of general business reputation and he predicts it will become even more important in the years to come.

But Bartlett’s main piece of advice for entrepreneurs looking to build their personal brand is to offer value.

‘Why would you follow someone? You want something of value, whether it’s the Kardashians you’re looking for entertainment or outfit inspiration, or Jay Shetty you’re looking for quotes about your life or Politics for All on Twitter because they’re delivering news stories very fast.’

‘The thing that really makes people stand out in the world of personal branding… you see this with, dare I say Katie Hopkins, Piers Morgan, Kanye West, Elon Musk… it’s having the courage to speak honestly even when it’s much easier to be correct.

‘The conversation revolves around you like a planet and that’s the really smart thing for personal branding… You have to become the centre point of conversation and the way to do that is to.

‘I’m not saying lie or play devil’s advocate, I’m saying have the courage to say what you actually think sometimes even though you know a lot of people are going to get p****d off by you.’

Bartlett has achieved in his 20s what most could only dream of achieving in their lifetime.

His ambition has partially developed from the insecurity of his own background. Born in a village in Botswana before moving to Portsmouth, Bartlett has previously talked of how little money his family had.

His ambition and persistence has paid off. Away from The Social Chain and his podcast, Bartlett has launched thirdweb – a Web3 firm capitalising on growing interest in blockchain – become an investor in Huel and Atai Life Sciences and recently made an appearance on BBC Question Time.

He tells This Is Money he is also looking to write a book on love and another on spirituality.

But he says there is no overarching end goal in sight.

‘I used to try and figure out where it was going. I wanted to be a happy, sexy millionaire. I wanted a Range Rover, a million quid, a girlfriend and a six pack… I got those things and then what? As I talk about in my book the anticlimax of it was really unfulfilling.’

Like Social Chain, it helps companies with their social media and communications but Bartlett is keen to distance himself from the ‘dishonest’ agency model where the ‘central objective is to hold the client ransom for ever increasing retainer fees’.

‘I want a client to be reliant on me… Imagine that I knew in fact the answer to their TikTok brief was in fact they need to hire this 16 year old kid and they can pay him £3,000 a month.

‘If I know that but I think that’s going to cut me out and I’m not going to be able to charge them £30,000 a month for telling you how to use TikTok. So our incentives aren’t aligned.’

Instead, he says, Flight Story will introduce companies who are looking to list or are already listed to the people and technology needed to increase retail investor interest.

The company, which was only incorporated in June, already has nine clients including one UK-listed company with a market cap of £11billion.

‘It might sound crazy, but I had phone calls from family offices that were telling me they now believe a successful TikTok strategy could sway their market cap by billions.

‘This is the world we’re living in, if you’re a public company and you don’t understand the opportunity and value of these social media platforms, and how they’re influencing – directly and indirectly the performance of your share price and of your public opinion, then you need to turn the lights on because you’re driving in the dark, and sooner or later you’re going to crash.’

Under the bright lights of Dragons’ Den and alongside the established stars of Peter Jones and Deborah Meaden, he’ll be hoping to unearth those business gems and help them steer their way to scaling up into a success story.