Dramatic body cam footage shows the moment a police officer shot and killed an armed Oregon man who pulled a gun and fired as he was being led out of a school in full view of his young daughter.

Charles Landeros, 30, was fatally shot in the head by Officer Steve Timm at the entrance to Cascade Middle School in Eugene, Oregon on January 11.

Video footage recorded by Timm’s body cam shows Landeros in the hallway near the entrance inside the building at around 10:30am.

Landeros, who was reported to be involved in a custody dispute over a young girl who attends the school, then sees his daughter coming down the hallway.

Charles Landeros, 30, was fatally shot in the head by Officer Steve Timm at the entrance to Cascade Middle School in Eugene, Oregon on January 11 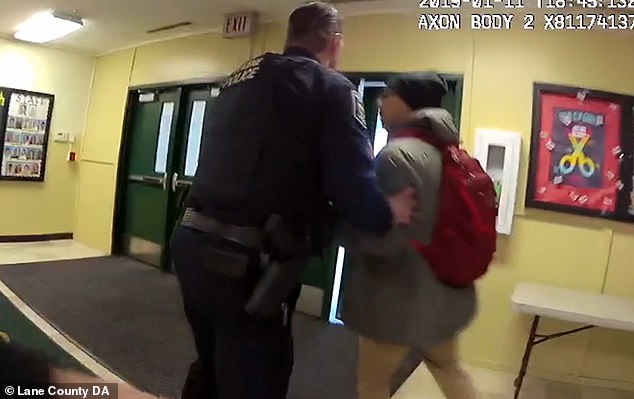 Landeros is seen above being escorted out of the school by Officer Aaron Johns. Landeros, who was in the middle of a custody dispute with his ex-wife, is trying to get the attention of his daughter (not seen in the frame), who wander into the hallway by coincidence 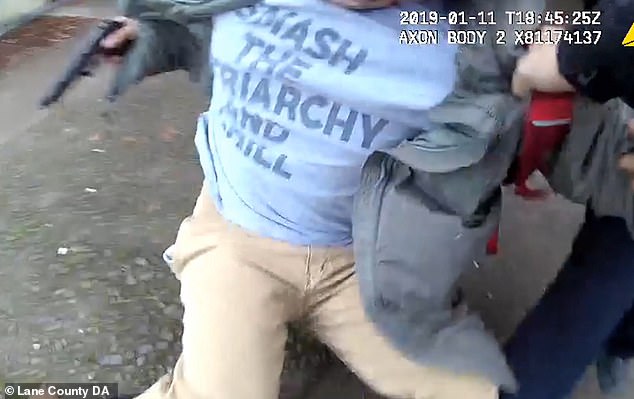 During a scuffle with Johns outside, he pulls out a 9mm handgun (above) and fires at Timm, who responds by shooting him in the head

At this point, the two officers, Timm and Aaron Johns, lead Landeros toward the exit in front of the school.

The officers inform Landeros that he is under arrest.

They then push Landeros up against the wall while trying to take him into custody.

Just a few moments later, Landeros pulls out a 9mm handgun and fired twice in Timm’s direction, according to The Register-Guard.

Johns and Landeros were wrestling each other on the ground when Timm, who was not hurt, fired the fatal shot that killed Landeros.

On Thursday, the Lane County District Attorney, Patty Perlow, said that the officers acted properly and that the use of force was justified.

There was ‘no clearer circumstance that the use of deadly force is justified than this,’ Perlow said.

The District Attorney also said that the officer acted appropriately in removing Landeros from the school.

She said there was probably cause to arrest Landeros for disorderly conduct and trespass. 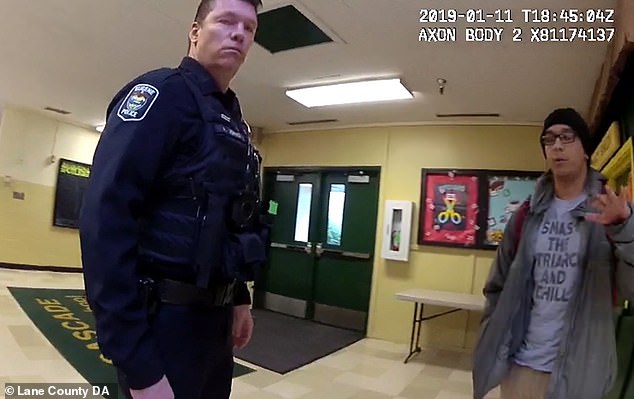 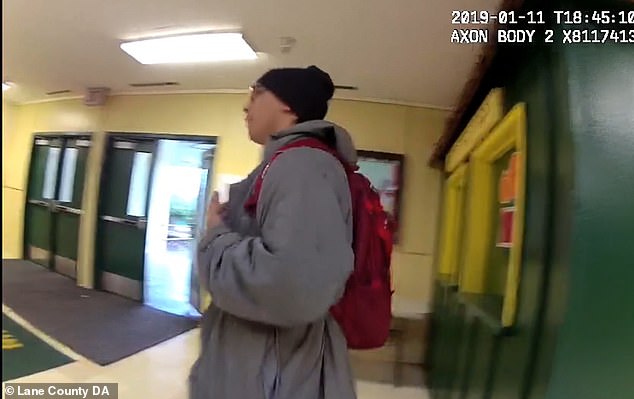 Landeros enrolled his daughter into Cascade Middle School, but the divorce decrees that while he shares custody with his ex-wife, the mother has final say on where the children are enrolled in school 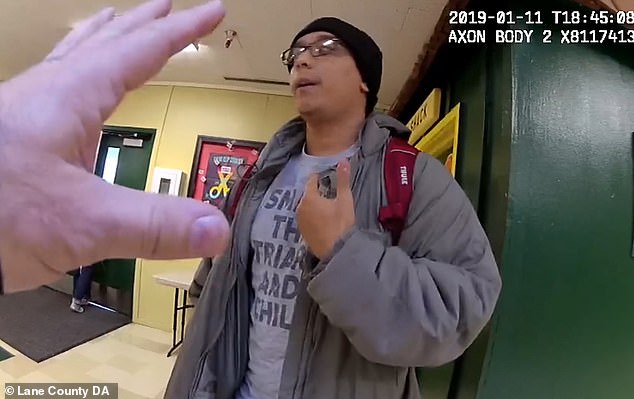 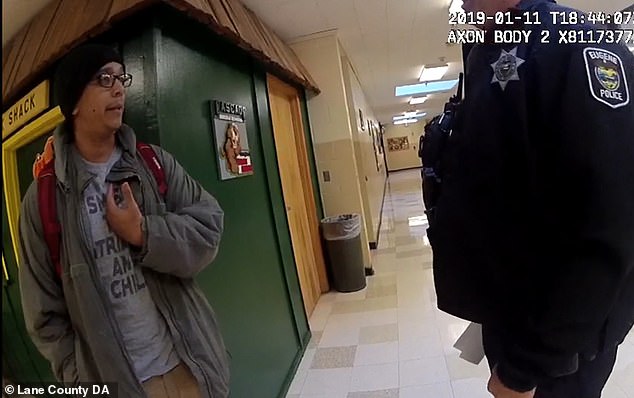 After he was told that the children’s mother would have final say on their schooling, Landeros refused to leave the school in protest, according to the District Attorney

‘Upon making the arrest, their lives, and the lives of others, were placed in danger by Mr. Landeros physically resisting that arrest, brandishing a firearm and firing it twice,’ Perlow said.

‘It is unknown why Charles Landeros chose to use deadly force in this circumstance, but he clearly had no regard for the lives of the police officers or the students or staff present, including his child.

‘Officer Timm saved the life of Officer Johns, himself and perhaps many others given the number of rounds Charles Landeros had loaded in his weapon.

‘There is no clearer circumstance that the use of deadly force is justified than this.’

Perlow said that the magazine in Landeros’ handgun was fitted with a device that expanded its capacity from 18 rounds to 20 rounds – not including the chambered round. 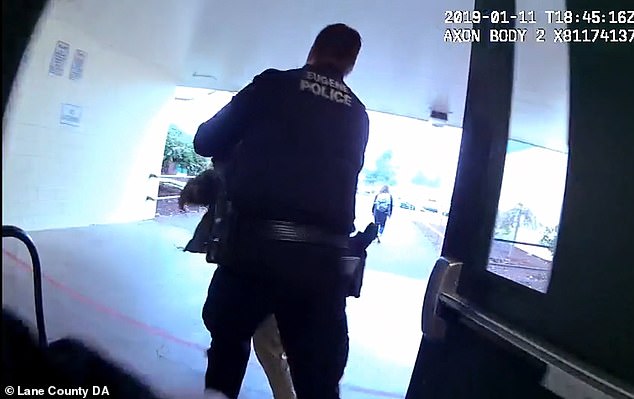 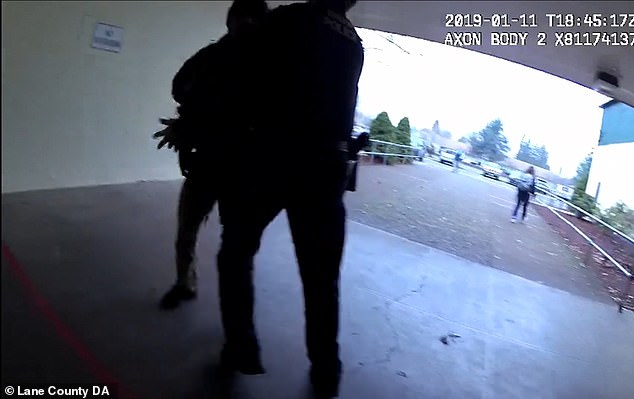 Johns is seen guiding Landeros toward the wall, where he will be pinned up against it while the officers try to take him into custody 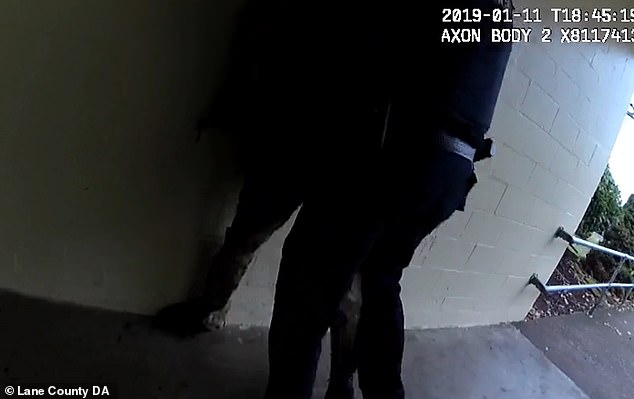 While Landeros is pinned against the wall, he actively resists arrest 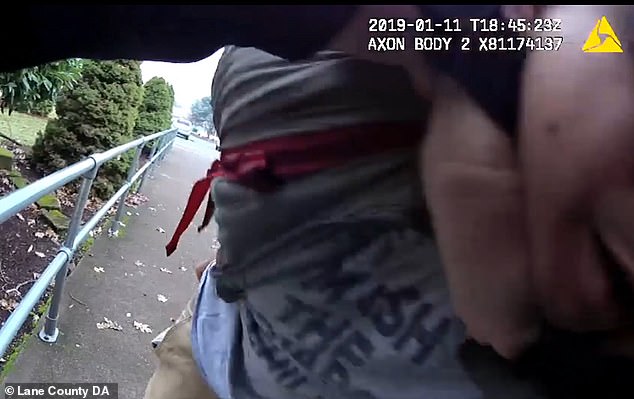 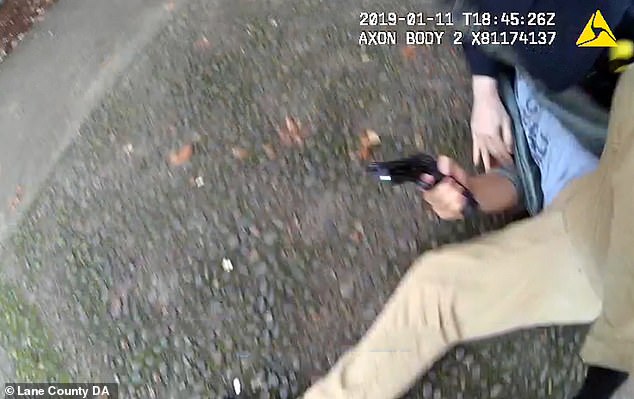 While on the ground, Landeros pulls out his 9mm handgun and aims for Timm, shooting twice 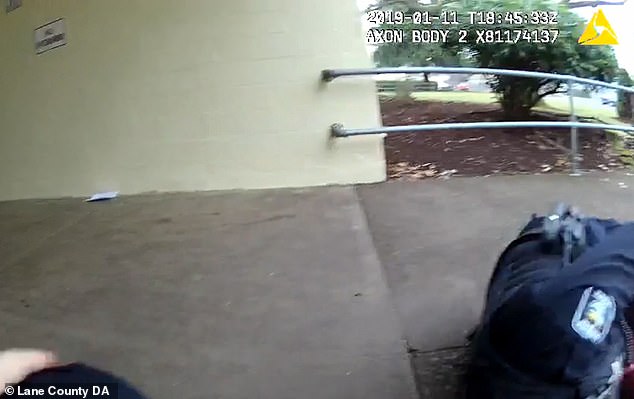 Landeros misses Timm, who then shoots Landeros once in the head. Johns is seen far right. The officers were not hurt

The District Attorney said that Landeros had another magazine attached to a gun belt that he was wearing.

Landeros also had on a backpack with more ammunition of a different caliber, Perlow said.

The District Attorney said that the struggle and the shootings all took place in full view of his daughter.

Lauren Regan of the Civil Liberties Defense Center said that the office will hire experts to independently review the shooting.

The law firm released a statement on Thursday suggesting that Landeros’ ethnic background may have played a role in his death.

The statement said that Landeros was ‘an activist against police brutality and a descendant of Mexican and Filipino parents.’

The family claims that Landeros was trying to get his daughter’s attention and that he was ‘shoved out the door in front of [his] child and pinned to the wall.’ 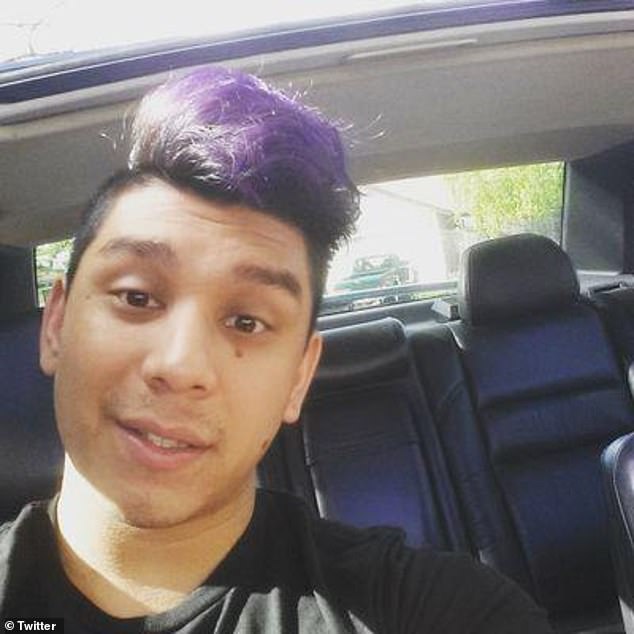 Landeros’ mother, brother, and partner have hired a civil liberties lawyer. Lauren Regan of the Civil Liberties Defense Center said that the office will hire experts to independently review the shooting. Landeros is seen in the above undated photo 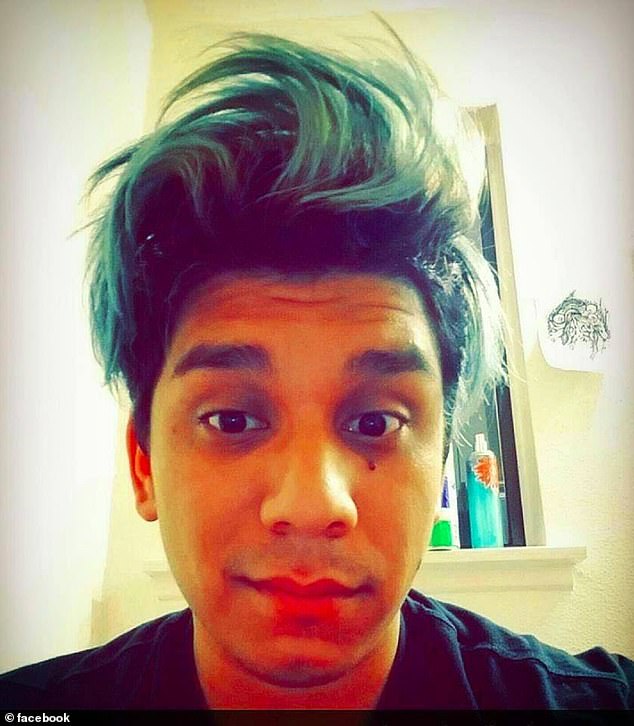 The law firm released a statement on Thursday suggesting that Landeros’ ethnic background may have played a role in his death. The statement said that Landeros was ‘an activist against police brutality and a descendant of Mexican and Filipino parents.’ 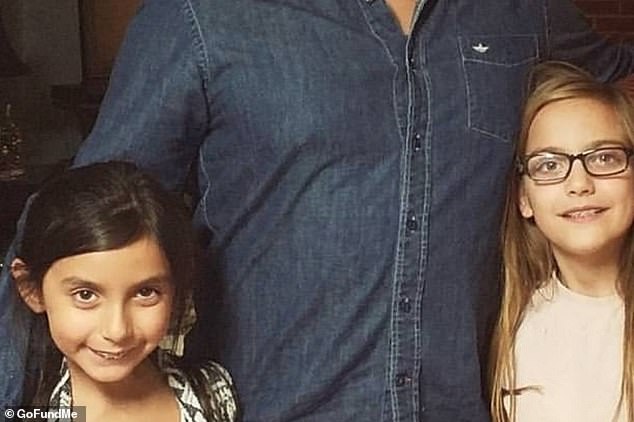 A GoFundMe page started for the Landeros family identifies Charles Landeros’ two daughters as Kayanna and Natalie, though it is not clear which of the girls witnessed their father’s shooting 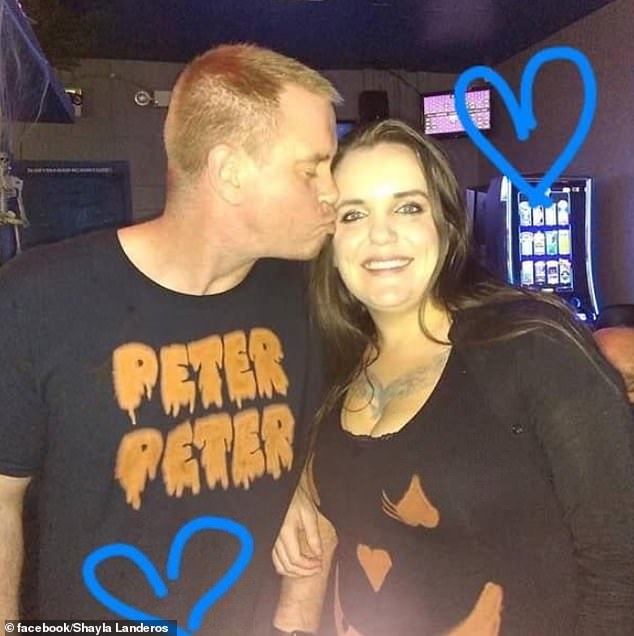 He was divorced from his ex-wife, Shayla (right), with whom he shared custody of their two daughters. The man on the left has no connection to the shooting

He was divorced from his ex-wife, Shayla, with whom he shared custody of their two daughters.

According to Perlow, Landeros enrolled one of the daughters in Cascade Middle School several days before the incident – without informing his ex-wife.

When Landeros’ ex-wife found out about it, she brought custody paperwork to the school.

The school then called Timm, the school resource officer. It is standard practice in the district to call in law enforcement whenever there is a custody dispute.

Timm then called Johns, who is also a school resource officer, for assistance.

According to Perlow, Timm met with Shayla Landeros separately and looked over the paperwork.

Timm then met with Charlie Landeros and told him that his ex-wife ‘had shared custody and exclusive control over where [the child] attends school,’ according to Perlow.

The terms of the couple’s divorce state that while the parents share joint custody of the two kids, the mother’s home would be the children’s primary residence and she ‘shall have final decision-making authority for decisions involving medical care, education, and the religion of the children.’

‘The conversation was respectful between Officer Timm and Charles Landeros, though Officer Timm reported concern that there would be a problem if Landeros was present if the mother exercised her right to remove the child from the school,’ Perlow said.

Charlie Landeros then left the office but stayed in the hallway to protest the officer’s order.

That’s when his daughter came into the hallway ‘by coincidence,’ Perlow said. 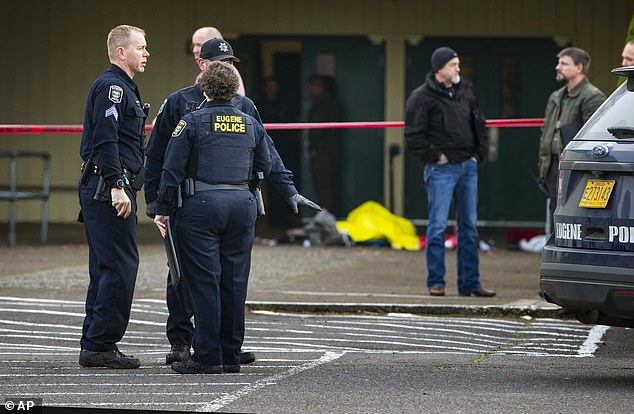 Eugene police are seen above securing the scene in front of Cascade Middle School in Eugene, Oregon on January 11 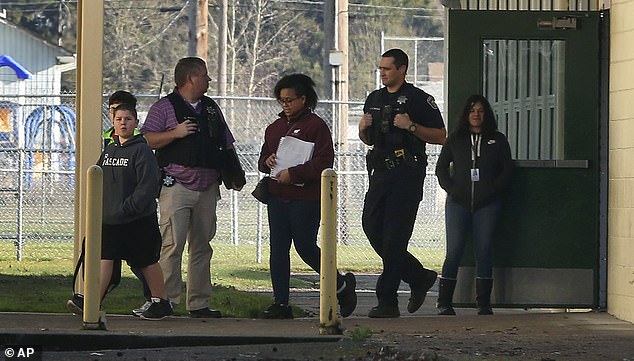 Officers escorted children from the school after the shooting, which resulted in the school being placed on lock-down 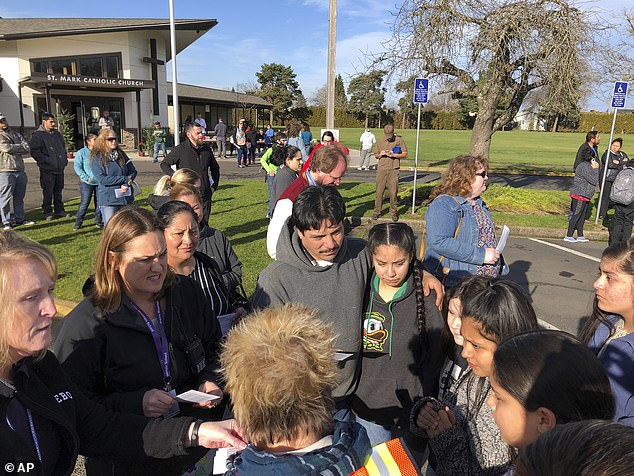 Parents of Cascade students wait outside St. Mark’s Catholic Church to be reunited with their children

The District Attorney said that the 9mm handgun that Landeros pulled out during his scuffle with the officers was bought by a relative.

While district rules forbid bringing guns onto school grounds, anyone with a license for a concealed handgun is permitted to have a concealed weapon on campus.

Landeros was a handgun instructor and the founder of Community Armed Self-Defense, a group which provided weapons training for people of color and the LGBTQ community.

Last year, the FBI received a tip stating that Landeros was posting violent anti-government messages on social media, according to Perlow.

The local FBI looked into the matter and determined there wasn’t enough evidence to indicate a crime had been committed.

On January 11, about an hour before the shooting, another tipster informed the Eugene Police Department that a Facebook account under the name ‘Charlie Landeros’ posted virulent anti-police messages, including ‘Death to all pigs.’

Two days prior to the shooting, Oregon police were alerted to another Facebook account with the name ‘Charlie Landeros’ that left similar comments.

Landeros has been a resident of Eugene, Oregon since 1989. He graduated from Willamette High School in 2006.

Landeros served six years in the Army as a helicopter mechanic and crew chief.

He also did tours of duty in Iraq and Afghanistan, according to friends and family.

In 2012, he received an honorable discharge and left the military.

With financial assistance from the GI Bill, he enrolled at the University of Oregon, where he majored in public policy and management.