This is the moment a have-a-go hero attacks armed robbers who tried to hijack his car at gunpoint during a test drive.

The gunmen posed as potential buyers for the car which Wilson Alberto Quintero and his father, a doctor, were selling in the Colombian capital city of Bogota.

In an incident captured by the car’s onboard camera, the men suddenly produced guns during a test drive while Mr Quintero was driving the car.

This is the moment a pair of armed robbers attempted to steal a car in Bogota, Colombia 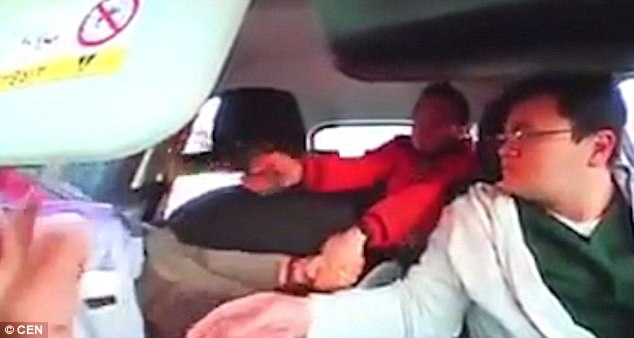 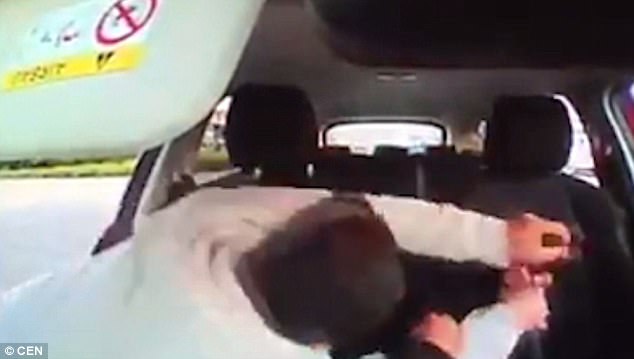 Pointing their weapons at the heads of their victims, the men tried to grab their valuables and ordered them to stop so that they could steal the car.

Mr Quintero’s father tried to open the door to shout for help but nearly lost his shirt as the robbers tried to pull him back inside the vehicle and handcuff him.

When the vehicle came to a halt, Mr Quintero wrong-footed the thieves by jumping out of the vehicle and his father quickly followed suit.

Mr Quintero then attacked the robbers, pushing one into the car, grabbing his gun with one hand and punching him in the face with the other.

He managed to hold onto the man until police arrived to arrest him while the other robber managed to get away on foot.

The video of the incident is proving popular after being shared on social media where viewers have been praising Mr Quintero for his courage.

But they were shocked by local media reports that the arrested man was later released as his gun was a plastic replica and he had no criminal record.

Bogota is widely regarded as one of the most violent cities in the world although the crime rate has dramatically fallen in recent years.