A masked gunman who opened fire on a man standing in the driveway of a Sydney home before fleeing in a getaway car is still on the run months after the shooting.

The victim, 33, was shot twice in the shoulder after being ambushed by the shooter while outside a Condell Park home in the city’s south-west early on January 21.

Police have released dramatic CCTV footage of the botched assassination attempt in a bid to find the gunman after a string of terrifying shootings in Sydney’s streets. 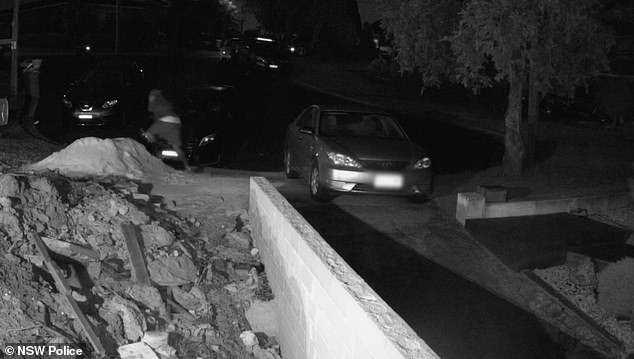 After firing twice, hitting the victim in the shoulder, the suspect is seen fleeing the scene, making his way to the getaway car

Footage shows a man wearing a ski mask, shorts and sneakers running up to the driveway of a home on Dalton Avenue around 2am while pointing his gun at the victim.

The gunman fires twice, hitting the man in the shoulder, before quickly taking off in a white Toyota Corolla hatch which was waiting nearby.

The car was last seen heading towards Jocarm Avenue.

The victim sustained two gunshot wounds to his shoulder and arm and was taken to Bankstown Hospital where he was treated. He has since been released. 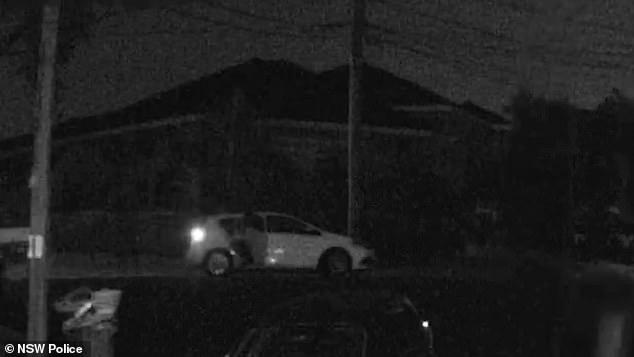 The man takes off in a white Toyota Corolla hatch which was waiting nearby. The car was last seen heading towards Jocarm Avenue

Detectives from the State Crime Command’s Criminal Groups Squad are actively investigating the incident and released the footage in hopes someone will come forward and identify the perpetrator. 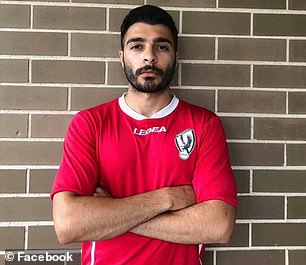 The gunman has been described as a between 180cm -190cm tall, large build, wearing dark shorts, white t-shirt, a dark hooded vest, and dark sneakers with white soles.

Authorities are also seeking information on the getaway vehicle.

The shooting is just one of a several other gun-related incidents to have rocked Sydney suburbs over the last few weeks.

Last week, police released footage of another masked gunman opening fire on a man in broad daylight as he walked into his family home before fleeing in a stolen Mercedes.

A video clip showed the homeowner, who is known to police, walking up to his front door before bullets smashed into the wall around him at 2.20pm last Tuesday. 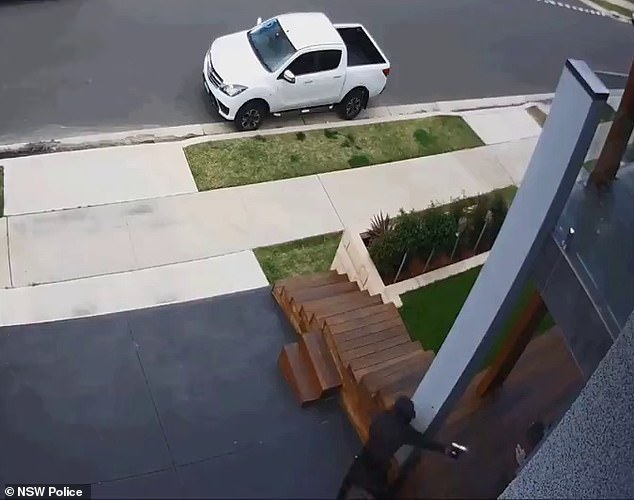 Last week, police released footage of two masked gunmen (one pictured) who attempted to kill a man as he walked into his western Sydney home are on the run 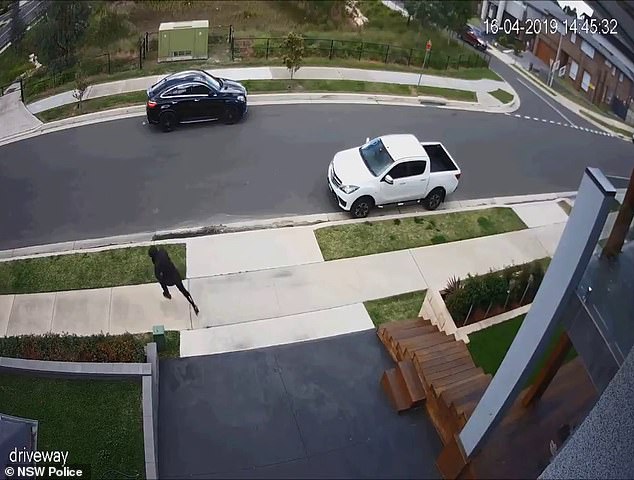 Superintendent Brett McFadden told media the execution attempt was targeted and likely gang-related, and is not ‘an isolated incident.’

McFadden also said there was ‘no doubt’ the gunman intended to kill the 31-year-old man in the shoot out.

Earlier this month, Sydney suffered another fatal shooting after a gunman allegedly shot two men at a Five Dock apartment complex in the early hours of April 2.

The shooting claimed the life of rising soccer star John Odisho, 25, who was shot in the head.

The second victim survived with a gunshot wound to the shoulder.

Cengiz Coskun, 27, was later charged with Mr Odisho’s murder and appeared at Parramatta Local Court where he did not apply for bail.

NSW Police believed the attack was targeted and are searching for another man seen running from the complex after the shooting.