This is the dramatic moment when hundreds of police officers raided a traveller site in a 3am bust – thought to be one of Britain’s biggest ever suspected gun crime stings.

Seven people have been arrested, while two people are being supported by specialists from the police’s Modern Slavery Team, say the Metropolitan Police.

Commander Kyle Gordon, the lead for the force’s firearms operations, told Sky News: ‘Any operation where there may be firearms involved requires a lot of planning and a lot of specialist assets. 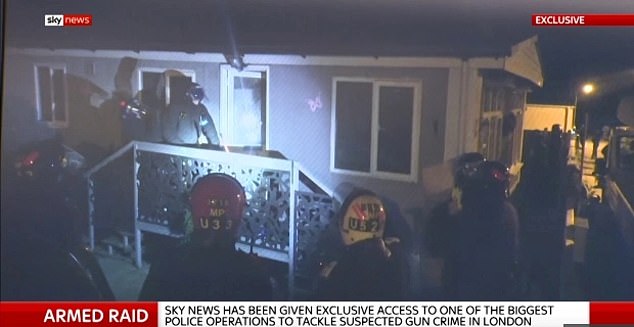 Seven people have been arrested during the raid, which took place in the early hours of this morning

‘As well as the local safer neighbourhood teams and officers that are leading this operation, of course we have our specialist firearms command involved, and a number of public order assets as well.

‘Those teams will do everything they can to identify the risk in advance so they can plan around that to minimise the risk – not just to the people on the site and the wider public, but also to themselves as well.’

Footage shows police, including armed officers, sweeping the large traveller site in the early hours of this morning.

Police are said to have used stun grenades, also known as flash-bangs, during the raid.

Officer say they used a number of ‘distraction techniques’ used to enter the site.

Seven people have been arrested on suspicion of offences including possession with intent to supply drugs, handling stolen goods and burglary while police say they have seized 17 dogs.

Detailed searches of the 22-pitch site, on Star Lane, near Orpington, are taking place this morning.

Investigators will now spend around two days searching the site, following intelligence about where guns might be hidden.

Commander Gordon said: ‘Tackling violent crime remains the Met’s top priority and our efforts to prevent serious harm and loss of life on the streets of London have not wavered, including over the last few challenging months. 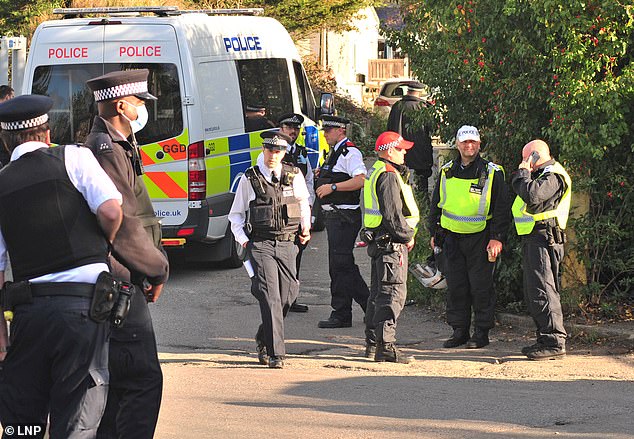 Investigators will spend around two days searching the site, following intelligence about where guns might be hidden 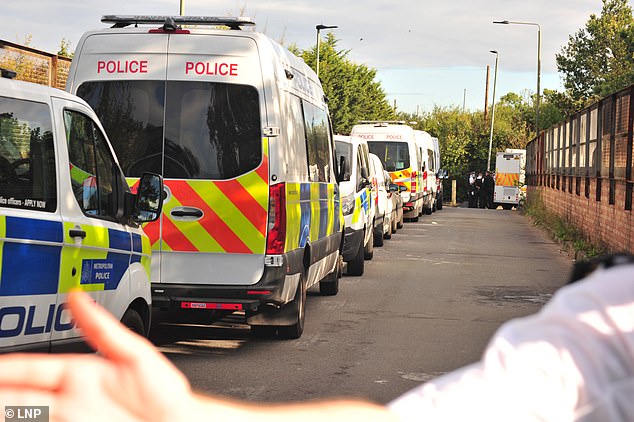 A line of police vehicles was seen near to the 22-pitch traveller site, in Star Lane, south-east London 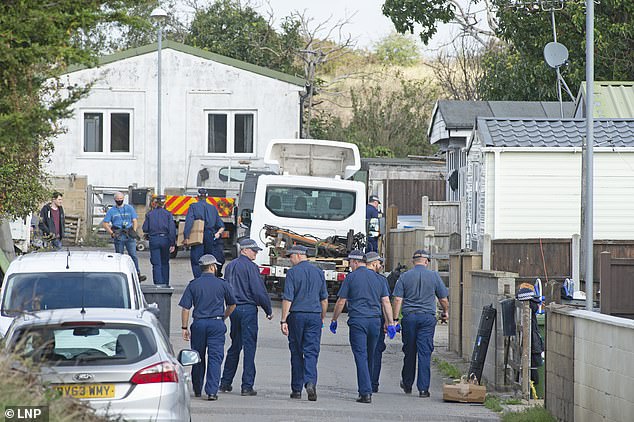 Police search teams were seen scouring the area throughout today. They are expected to carry out searches tomorrow as well 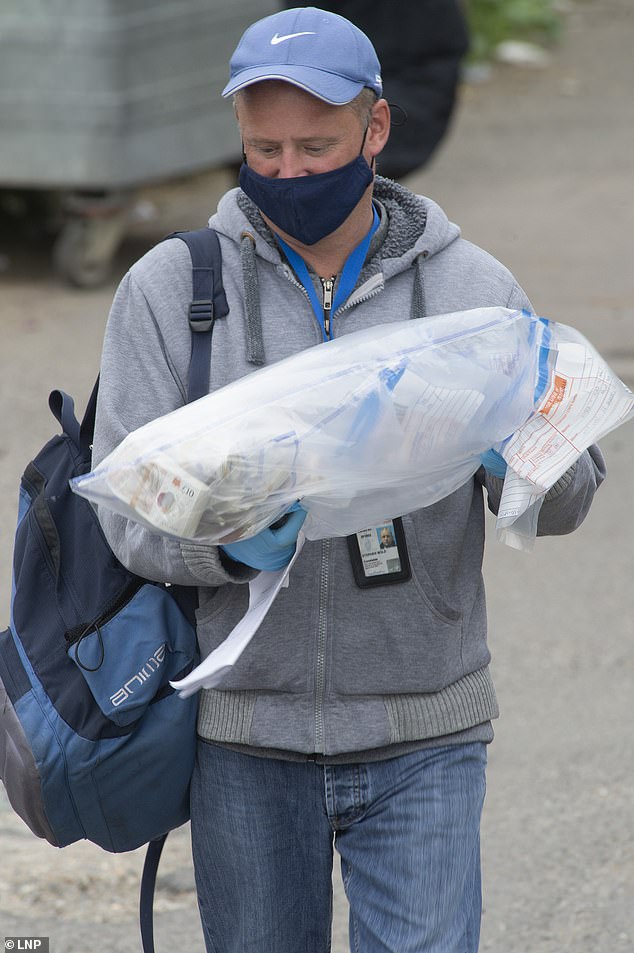 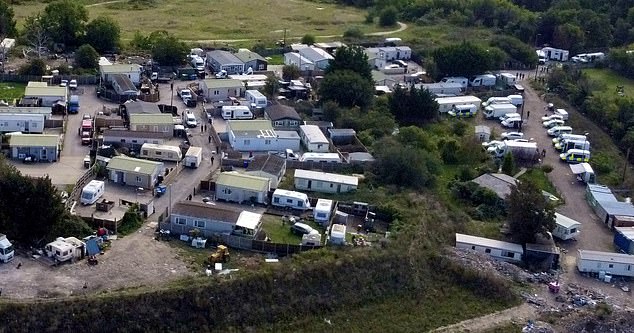 An aerial view of the raveller site on Star Lane in Orpington, where police raided in the early hours of today 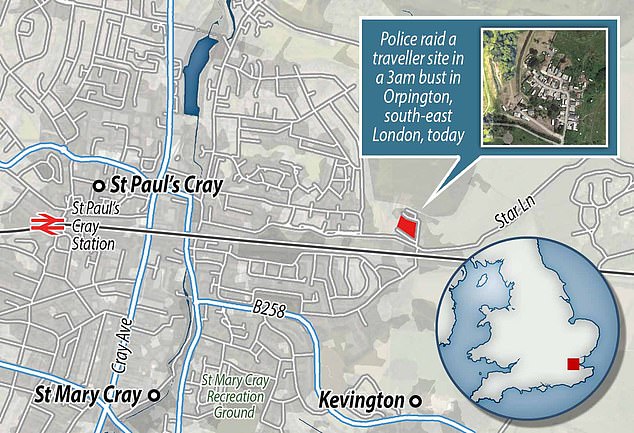 ‘This operation clearly demonstrates that every officer – from local neighbourhood teams all the way up to our specialist crime investigators – is focused on bringing those responsible for violence and organised criminality on the streets of London to justice, to keep our communities safe.

‘This case was led by local neighbourhood officers in response to local issues, and its success would not have been possible without the support of partners and communities.

This operation has targeted serious and organised crime head on, and will mean the surrounding communities are now safer for those living within them.

‘Over recent months we have seen an increase in the number of firearms incidents across London and proactive operations like this are crucial to removing the availability of weapons and drugs on the streets.

‘We have now seized dozens of lethal firearms and prevented them entering the hands of dangerous individuals.’

Superintendent Andy Brittain, from the Met Police’s South Area Basic Command Unit, added: ‘We’ve been listening to the concerns of the local community and I hope that today’s activity shows how seriously we take your concerns and that we do act upon them. 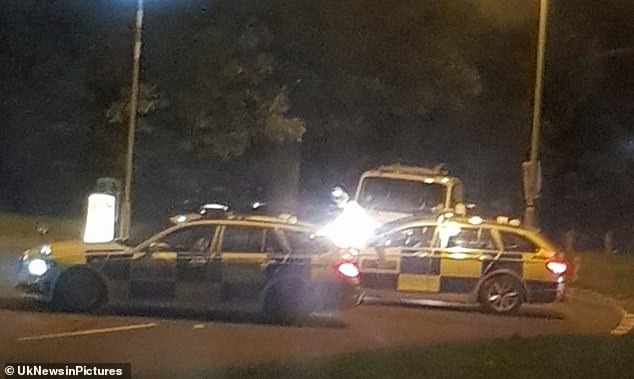 Footage shows police, including armed officers, sweeping the large traveller site in the early hours of this morning 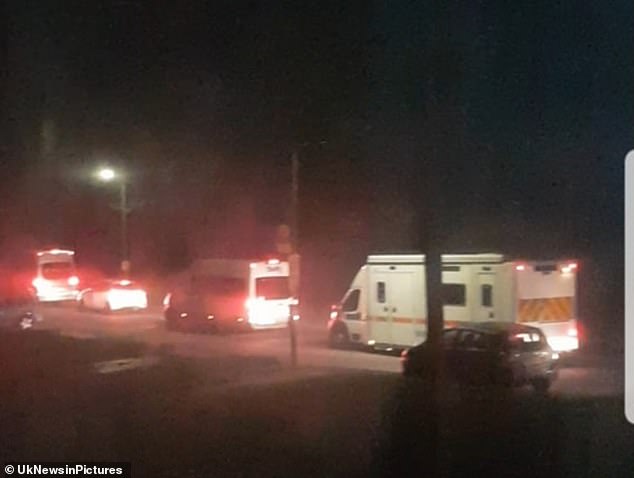 Elite officers from counter-terrorism units in the capital were also involved, while police are said to have used stun grenades, also known as flash-bangs, during the raid 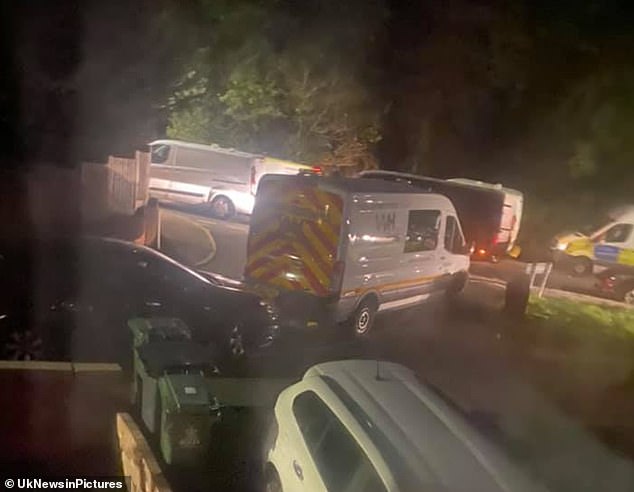 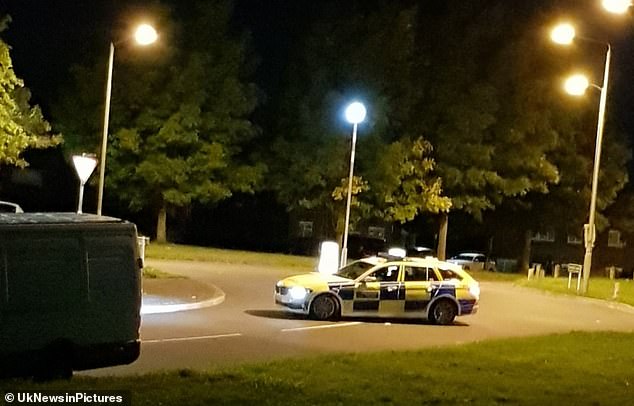 Commander Gordon said: ‘Tackling violent crime remains the Met’s top priority and our efforts to prevent serious harm and loss of life on the streets of London have not wavered.’ Pictured: Police at the scene today

‘This is a prime example of why we rely on intelligence and information so much from our communities. It helps us keep your streets safe.

‘Local residents may see an enhanced police presence over the next few days and possibly some road closures whilst we carry out or searches.

‘We are working with the local authorities to look after the safeguarding of residents and children that may be temporarily displaced whilst we do these searches.’

Earlier this year Britain’s biggest ever crime bust captured 746 crooked kingpins and foiled hundred of plots after raids by every UK police force, with £54 million of dirty cash, two tonnes of drugs and 77 firearms seized after an impenetrable phone network was smashed.

A sting spanning the globe saw scores of raids carried out across the country in a major move in the battle against drugs, guns and illegal activity. During the two-month operation officers seized the illegal cash along with firearms including hand grenade and machine guns.

But it was only made possible after the National Crime Agency and European forces managed to get inside a formerly secure phone system called EncroChat in an operation dubbed Operation Venetic. 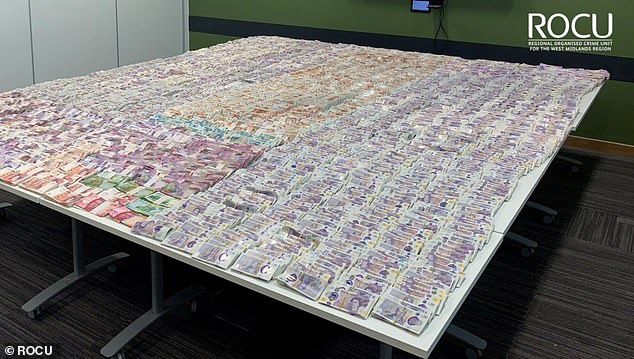 BIRMINGHAM: The haul from the nationwide sting found £54million in cash among drugs and guns

It is a messaging system, which is similar to WhatsApp, and is only pre-loaded onto special phones which have to be specially bought.

Criminals paid £1,500 for a six month contract to use them and could send a ‘kill code text’ which wiped everything on the customised Android handset.

Experts in France and the Netherlands infiltrated the illegal communication network, which helped them understand what crimes gangs were planning, like in TV hit The Wire.

In the show one of the police officers built up cases against crooks by using a device called the Triggerfish, which collected data from their phones.

In the real world, investigators found 60,000 users worldwide and around 10,000 users in the UK alone on EncroChat – the sole use was for coordinating and planning the distribution of drugs, guns, dirty cash, money laundering and plots to kill rival criminals.

It was a treasure trove of evidence as top level criminals could be monitored speaking freely about their operations and plans, thinking their network could never be cracked.