Dream trip or highway to hell?

Ditching the daily grind and taking off in a camper van was novelist Rosanna Ley’s fantasy. Then she and her husband actually tried it…

Who doesn’t fantasise about getting away from it all? Escaping the daily grind, travelling to somewhere warm and wonderful? Who doesn’t occasionally dream of cloudless blue skies, golden beaches and a sparkly Mediterranean sea – not just for a week or two on an annual holiday, but for longer… much longer?

Ten years ago, my husband Grey and I resolved to make this fantasy a reality. We were both in our frivolous 50s. We had both spent our adult lives working full-time. And we were both a little weary. Where had the excitement in life gone? We seemed to have reached some sort of turning point – a bit ‘do or die’. Now that the children had left home – almost – shouldn’t we be thinking about doing something we’d always dreamed of?

Who doesn’t fantasise about getting away from it all? Escaping the daily grind, travelling to somewhere warm and wonderful?

‘If we weren’t working,’ Grey said mournfully one day, ‘we could just up sticks and leave.’

‘Leave?’ I echoed. It sounded so final. My younger daughter was still living at home, although she too had the travel bug and was planning to visit Australia for a year. How could we just leave? And what about all our… stuff?

‘We’ve got far too much,’ he declared dismissively. ‘We’ll do a car-boot sale, put the rest of our stuff in storage, rent out the house and go.’

Grey made it sound so easy. I thought of those clear blue skies, imagined the writing inspiration that might be had from such a trip.

But this shared dream was just a fantasy – wasn’t it? Couples talk like this all the time – well, we do. We go somewhere on holiday and by day two we’re looking in estate agents’ windows. It doesn’t mean we’ll be moving there anytime soon.

But a few days later, we spent our savings on a camper van. (Yes, the woman who dithers over cans of beans in the supermarket can spend £20,000 on a second-hand camper van in the blink of an eye.)

Should we have done this earlier, later, never? Were we too young or too old for a camper van? Who cared? We so fell in love with that van and were soon trundling off happily for weekends in Dorset. But it wasn’t enough. It was like a drug. We needed more of the open road. We needed to be living our dream.

So we took the plunge. I gave up my teaching job, Grey wound down his client diary. We cleared the house and begged the loan of friends’ garages for storage of all our worldly goods. We organised shelter for my younger daughter until she went to Australia and for my elder daughter who had moved back home to save up for a trip to South America. What was going on with this family? 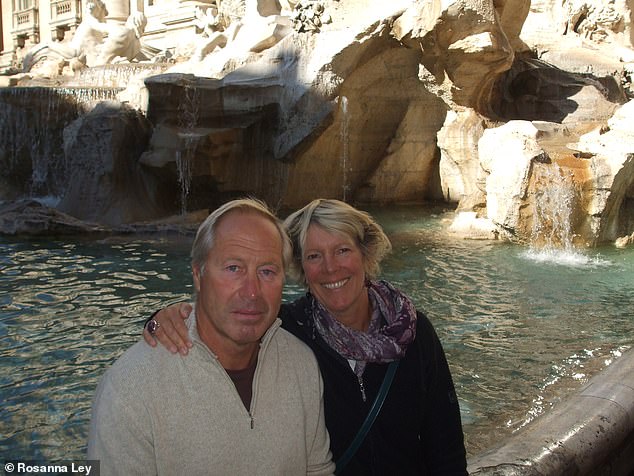 Look, no steering wheel! Rosanna and Grey hit the tourist trail in Rome

We redecorated the house and advertised it for rent – this would be our income. We would go on a road trip – for six months or more. We would live close to nature. We would make our own entertainment – Scrabble and reading, no TV for us! We would be free to go wherever the wind blew us. It was a fantasy, yes. But we would make it come true.

Our day of departure dawned. We waved goodbye to my daughters and headed for Dover. We had done it. We were on the road and heading for Italy.

The first two weeks were wonderful. OK, there were some minor hiccups. We hadn’t taken into account the hilly terrain in Liguria – many a steep, narrow road proved too much for our van. Nor had we realised that campsites in Italy were so expensive. And we hadn’t dreamed it would be so hot. (I will never complain about air-conditioning in an apartment in the Med ever again.)

Getting stuck up a mountain on a tight bend, damaging the camper van’s back panel in a complex manoeuvre designed to get us to the beachfront then getting lost while scrambling down a hillside of olive trees… Such things are bound to make tempers fray – especially in that heat. And in our haste to be free of all our possessions we had forgotten a few vital pieces of equipment – such as the coffee maker and the duct tape. But that’s what it’s all about, we reminded ourselves, as we settled in for another interminable game of Scrabble. It’s about having exciting adventures, new experiences, being free. And there’s always another camper vanner around with an unfeasibly large toolkit to help out in times of trouble.

But, two weeks in, things were not going as smoothly as we’d hoped. Our van was small – with the table erected, the person trapped on the far side could barely breathe, let alone move – and we had to make up the bed from scratch (or should I say slats?) every night. Yes, every night. It’s surprising – even when you have little else to do all day – how very tedious this can become.

It turns out that – surprise, surprise – size matters. Claustrophobia set in. We tried to stay outdoors most of the time but, actually, it rains quite a bit in Italy. Still, we remained cheerful. This was our shared dream, remember. If this was what it took to make that dream come true… 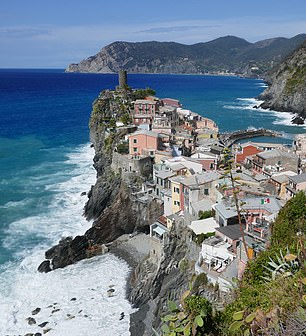 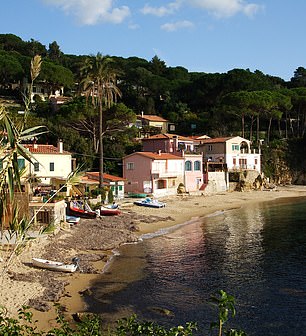 By week three, like Napoleon once was, we were exiled on the island of Elba. And very nice it was too, we agreed, as we sampled the delicious gelato. But money was getting tight, which meant two things. One, we had to eat in – every day. And two, we couldn’t afford to stay in campsites. But, hey, weren’t we at one with nature? Heating up bottles of water on the dashboard for an outside shower after a day on the beach only went to show how resourceful we had become.

And, as all camper vanners know, there is an alternative to campsites – it’s called ‘wild camping’. In our fantasy, this meant finding deserted beauty spots in which to park the van and gaze out at an unspoilt landscape. In reality, it meant car parks (marginally safer and quieter than roadside parking, though I didn’t say this the night half a dozen youngsters practised their motorbiking skills around the car park at 2am).

How to keep the shared dream alive

In one such car park we met some friendly Italian camper vanners, immune to the hordes of mosquitoes we fought to escape from at twilight every night, who showed us around their (much larger and homelier) van with pride. There was a language barrier, which may explain why they left the car park and we stayed – only to wake up at 5am with a raucous Italian market setting up around us and no way out. But, well, it’s all part of the fun.

Back at home, we had friends, family and colleagues to chat to; on the road we had each other. It was good to have so much time to talk. But… in small spaces, over time, conversations with your nearest and dearest can become a little, shall we say, intense. Past misdemeanours and misunderstandings that you may or may not have forgiven may once again rear their heads. But we could get through this – together.

It was lucky we were so close, we kept telling ourselves. But did we want to be quite that close? All the time? We had given up material things – but had we also lost sight of civilisation? When we eventually left Elba, Grey was following a camper van with GB plates at breakneck speed. I glanced across at him (by this point we didn’t need words).

‘They’re British! Why don’t they pull over and talk to us?’ he asked me through gritted teeth. 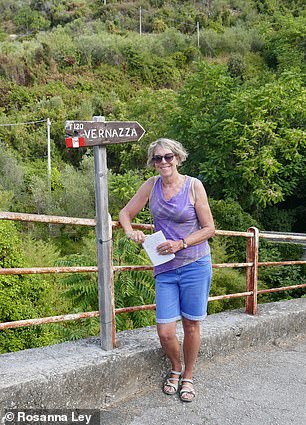 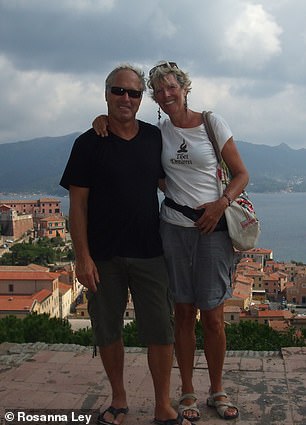 Rosanna walks off her van rage in Liguria on the path to Vernazza; Exiled and broke in Elba 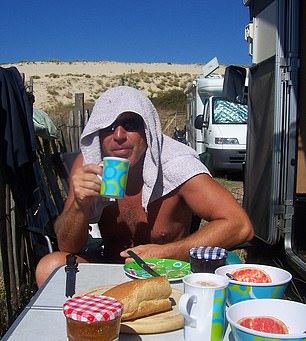 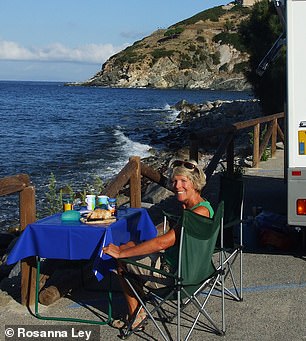 Grey swaps the heat of the van for … more heat, left. Rosanna enjoys her view without a dashboard, above

This, let me tell you, is what travelling in a camper van can do to a person.

And then autumn arrived, and it began to get cold. We realised with a feeling of mounting horror what this meant – more time in the van, together. More talking, more Scrabble, more opportunity to examine our relationship. Did we really want that? Could we survive?

We considered travelling further south in search of sunnier climes. But funnily enough, driving was beginning to feel monotonous, too. And finding places to sleep at night was also becoming a strain. It was still great to be on the road – but wouldn’t it be even better to stop in one place for a while?

‘Why not just dump the van and rent an apartment?’ Grey suggested.

I stared at him. Dump the van? Rent an apartment? What about our shared dream?

‘Somewhere hot,’ he continued. ‘The Canaries?’

Which is how we came to leave our van in Italy – to be collected in the spring – and book a flight to Fuerteventura. Sod the expense. We rented an apartment with entire rooms to be alone in. It had a bed that remained a bed, day and night, and a bathroom with proper drains – no chemical toilet to empty and clean. Pure bliss.