A single mum whose squabbling sons drove her to booze during lockdown has avoided jail for a drunken tirade at police.

Jaimie Lewis, 43, said she was not normally a drinker but had found her boys ‘too much’ to cope with when they were all stuck at home together.

After drinking cider during the day, she got into her car on the night of May 5 to get away from her children, who are aged 20 and 14, when they started arguing.

She was spotted by police 1.5 miles from her home in Bournemouth, Dorset, swerving across the road. 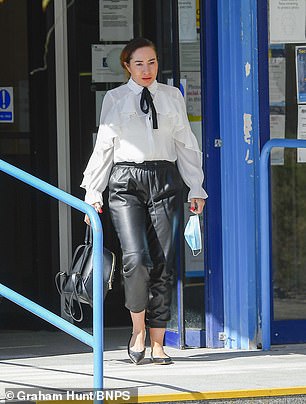 Jaimie Lewis avoided jail for failing to provide a specimen. Lewis was stopped by police after they spotted her swerving in her car but the 43-year-old said she only drank because being in lockdown with her sons was too much and she needed to get out to escape their arguing

Lewis, a holistic therapist, failed a roadside breath test and was arrested.

But once at the police station she began hurling drunken abuse at officers and refused to provide a breath specimen.

When asked about drugs, a video shown in court showed Lewis telling a policeman ‘I’m vegetarian, I do reiki, I don’t do any of that s**t’.

Magistrates heard her behaviour suggested a ‘high level of intoxication’.

David Finney, prosecuting, said the footage of Lewis showed her ‘struggling to stand up’ and falling against a wall.

He said: ‘Officers stopped the defendant due to the manner of driving. They observed she nearly hit the kerb twice and when they spoke to her immediately saw the indicators for drink.

‘She was slurring her words and closing her eyes.

‘The roadside breath test was a fail and the defendant was then arrested and taken to the police station.

‘This footage shows she was struggling to stand up at the station. She stumbles backwards into the wall.

‘There is 20 minutes of footage in total over several videos but this demonstrates the worst of it.

‘The defendant was abusive throughout and eventually refused to provide a specimen for analysis.’ 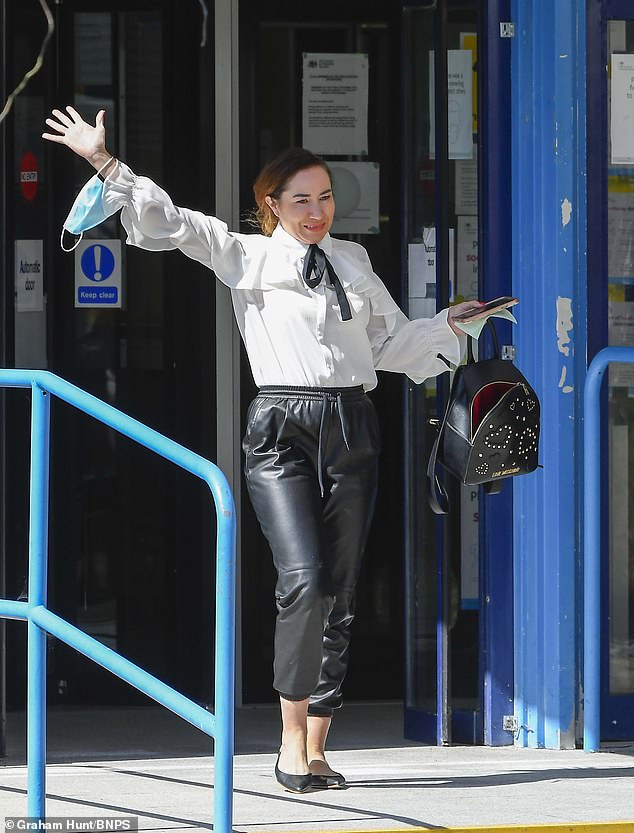 Video played in court showed Lewis, pictured waving to a friend outside Poole Magistrates Court, in a drunken rant at police officers while in custody and calling one a ‘f**ker’ and a ‘c**t’

After the footage was shown in court, Lewis appeared to have trouble breathing and was removed from the building to get some fresh air before the hearing could continue.

Ewa Russell, defending, said: ‘Becoming upset and hyperventilating, that was not some show, she suffers from anxiety and in highly stressful situations can have attacks.

‘Seeing the footage brought back the memories of something she is very ashamed of.

‘She wishes to tell the court she knows she was exceptionally irresponsible on this day. She’s not a drinker and hardly ever drinks.

‘But being in lockdown with her two sons, aged 20 and 14, she had found it a little bit too much and did drink that day.

‘There was an argument between the two boys which got out of hand and she wanted to remove herself from the situation but obviously what she went on to do was something she should never have done. 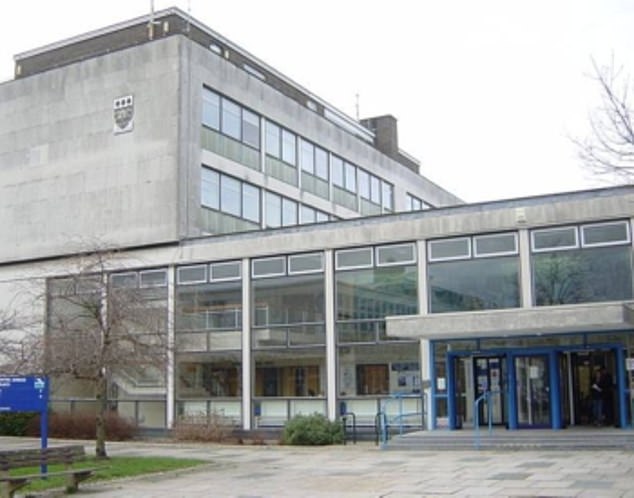 At Poole Magistrates Court Lewis was given a 12-month community order with 80 hours of unpaid work and 15 rehabilitation days. She was also banned from driving for 12 months

‘She’s a mobile holistic therapist but since Covid she has been unable to work as you have to be able to touch faces and hands.

‘She has no hope she will be able to go back to it any time soon so at the moment she is a single mum claiming universal credit.

‘Her mum in her 70s lives independently but had a bad fall during lockdown and Miss Lewis had to become her carer effectively, travelling between the two homes.’

Lewis, of Bournemouth, pleaded guilty to failing to provide a specimen for analysis.

Magistrates in Poole gave her a 12-month community order with 80 hours of unpaid work and 15 rehabilitation days.

She was also disqualified from driving for 12 months and ordered to pay £180 costs.