Drink for fertli-tea! Lovers of a cuppa have more swimmers, study finds

Men who drink tea may have better luck conceiving, a study suggests.

Researchers in China studied the sperm quality of nearly 1,400 men.

Their results revealed men partial to a cuppa had a higher sperm concentration and count.

Sperm-boosting benefits were only seen in men who drank tea three days a week, so experts don’t know if having a mug every day would be even better.

Researchers at Hubei University in Wuhan, the city where Covid emerged, concluded that ‘tea drinking may improve male reproductive health’.

Sperm counts have tumbled over the past few decades, sparking warnings of a male fertility crisis.

Researchers in China studied the sperm quality of nearly 1,400 men. Their results showed men who drank tea had a higher sperm concentration and sperm count 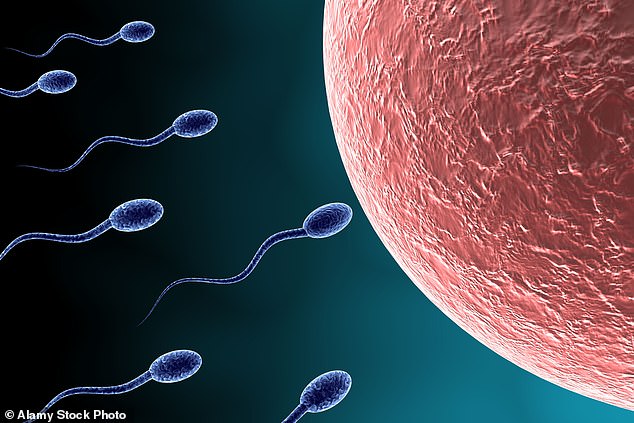 WHAT IS A LOW SPERM COUNT?

It can make it more difficult to conceive naturally, although successful pregnancies can still occur.

Men are advised to contact their GP if they have not managed to conceive after one year of trying, as they can arrange a semen analysis.

This involves analysing the quality and quantity of sperm.

Sufferers may be advised to keep trying, undergo IVF, use donor sperm or a hormone treatment that boosts sperm count.

A low sperm count may be caused by a hormone imbalance, genetic problems, undescended testicles or a genital infection.

Excessive alcohol consumption, smoking and drugs such as marijuana and cocaine are known to worsen it.

It is, for this reason, why men wanting to become fathers are reminded of the benefits of eating a well-balanced diet and exercising regularly.

Some healthy foods, including fruit, green leafy vegetables and beans, have been individually linked to better sperm concentration and motility — their ability to move efficiently.

In the same fashion, fertility studies have also suggested that red meat, coffee and sugary snacks may cause a downturn in semen quality.

But the experts behind the latest project said the effects of tea drinking on sperm are unclear.

Volunteers were also quizzed on their health and lifestyle habits.

All participants were healthy and being screened as potential sperm donors at the Hubei Province Human Sperm Bank of China.

The results, published in the scientific journal Chemosphere, show that 28 per cent drank tea, while 72 per cent did not.

The volunteers did not report what type of tea they drank, or whether they added milk or sugar.

But it was conducted in China, where green, oolong and black tea are common — and are usually just combined with water.

The team also discovered that those who had drank tea for 10 years or more had a 16.3 per cent higher sperm concentration.

However, they did not say whether this was in comparison to less regular tea-drinkers or those who do not drink the hot beverage at all.

The figure was even higher among those who drank tea for three days or more per week, among those who preferred weak cups of tea and those who only occasionally drank alcohol, the researchers said.

However, there was no link between tea drinking and sperm motility and structure.

Having a low sperm count or concentration may make it difficult for a man to conceive naturally — with the problem affecting a third of couples struggling to get pregnant.

Men can get their sperm checked by their GP if they have not managed to conceive after one year of trying.

There are also home-testing kits available in pharmacies and online. But medics warn these have not been extensively studied and are less thorough.

Studies have shown that sperm counts are trending downwards, causing reproductive experts to raise the alarm that the situation could ‘threaten human survival’.

Dr Shanna Swan, an epidemiologist at Icahn School of Medicine at Mount Sinai in New York City, authored a ground-breaking 2017 study that revealed that global sperm counts have dropped by more than half over the past four decades.

She warned that ‘everywhere chemicals’, such as phthalates found in toiletries, food packaging and children’s toys, are to blame. The chemicals cause hormonal imbalance which can trigger ‘reproductive havoc’, she said.