The kitchen cupboard staple, which is also known as bicarbonate of soda, may prevent rheumatoid arthritis patients’ immune systems attacking their joints, which leads to painful inflammation, a study found.

After just two weeks of drinking water with baking soda, people produced fewer immune cells that drive inflammation and more that dampen it down, the research adds.

Previous research suggests bicarb enables up to 20 per cent of women experiencing difficult labours to avoid Caesarean sections by neutralising acids in their wombs.

Rheumatoid arthritis affects around 1.3 million adults in the US.

WHAT IS RHEUMATOID ARTHRITIS? THE AGONISING LONG-TERM ILLNESS THAT IS INCURABLE

Rheumatoid arthritis (RA) affects around 400,000 people in the UK

Rheumatoid arthritis (RA) affects around 400,000 people in the UK and nearly 1.3 million adults in the US.

Women are up to three times more likely to develop the condition than men. Those with family history of rheumatoid arthritis are also more vulnerable.

It is a long-term illness in which the immune system causes the body to attack itself, causing painful, swollen and stiff joints.

RA, the second most common form of arthritis that often begins between the ages of 40 and 50, tends to strike the hands, wrists and knees.

Scientists are currently unsure as to the exact cause of RA, but smoking, eating lots of red meat and coffee drinkers are at higher risk.

A cure has yet to be found, but treatments are available and proven to help slow down the progressive condition.

Patients can manage their agonising symptoms with over-the-counter drugs that combat the inflammation, such as aspirin.

But some will need replacement joints to relieve them of their pain. Exercise is recommended as it can help to look after joints.

How does baking soda ease arthritis?

Baking soda is thought to act on the cells that line internal organs. These cells, known as mesothelials, warn the body when there is an ‘intruder’ and an immune response needs to be launched.

Drinking bicarb is thought to cause the spleen to ‘tell’ mesothelial cells not to launch an immune response.

The researchers, who asked healthy people to drink a bottle of baking soda-infused water, also found the beverage reduces T cells, which are also part of the immune system and are associated with inflammation.

These results continued for at least four hours.

The findings, published in the Journal of Immunology, further suggest drinking baking soda causes people’s spleens to enlarge, which may be due to it creating an anti-inflammation response. 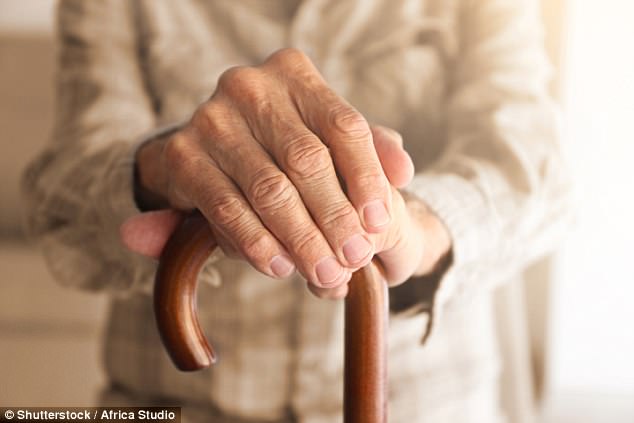 The kitchen staple, which is also known as bicarbonate of soda, may prevent rheumatoid arthritis patients’ immune systems attacking their joints, which leads to inflammation (stock)

Research released in January suggested that after drinking bicarb dissolved in water, between 17 and 20 per cent of women having slow or difficult labours give birth naturally, without harming their babies.

Speaking on the BBC’s Today show, study author Professor Susan Wray from the University of Liverpool explained that baking soda used in the study is the standard type available in supermarkets.

The researchers believe consuming bicarb is a simple, cost-effective way to improve the wellbeing of mothers during labour all over the world.

They analysed 200 women who had difficult or slow labours, some of which then drank water containing baking soda.

One hour later, those who needed it were given the hormone oxytocin, which is the standard-of-care during slow deliveries and causes the uterus to contract.

Those not given bicarb were administered oxytocin immediately.

Around one-in-four births in the UK is carried out via c-section. Although usually safe, the procedure can cause blood clots, excessive bleeding and womb infections.