Driver, 22, is senteced over death of teenager

A drug dealer who crashed into a lamppost and killed his best friend when he was chasing members of a rival gang was today jailed for nine years.

Nassem Galleze, 17, was in Gary Brown’s car as it roared down a 20mph road at 63mph after it was attacked by the ‘Turnham Road Boys’ in South East London.

Brown, 22, who had never taken formal driving lessons, span out of control in the Vauxhall Corsa and police saw Nassem slumped unconscious in the back seat.

Paramedics were called and took the promising footballer – described as ‘loving, caring, thoughtful and respectful’ – to a hospital where he was pronounced dead. 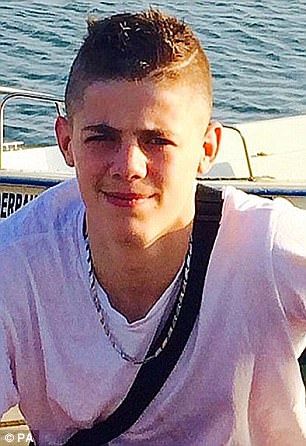 Gary Brown (left), 22, had driving through South East London with two passengers including his friend Naseem Galleze (right), 17, when they were attacked by a group of youths

Brown was found covered in cuts and bruises perched on a wall by the side of the road after the incident on Frensbury Road in Brockley on September 26, 2015.

He was arrested for driving without a license or insurance, and in December last year was charged with causing death by dangerous driving.

Brown was found guilty of death by dangerous driving in June. Sentencing, Judge Wendy Joseph QC said today: ‘I do regard the events of 26 September as gang-related.

‘On the day before the incident with which we are concerned Gary Brown and Nassem travelled to the Eastboune area to collect a car he had previously purchased.

‘He had no insurance, no license, and no experience beyond one driving lesson with his step-father.

‘He told the court he didn’t think it was a big deal he had no license, no insurance and no driving ability.’

The court heard how Brown was affiliated with, but not necessarily a member of a group called the ‘Splash Gang’, who are rivals to the ‘Turnham Road Boys’. 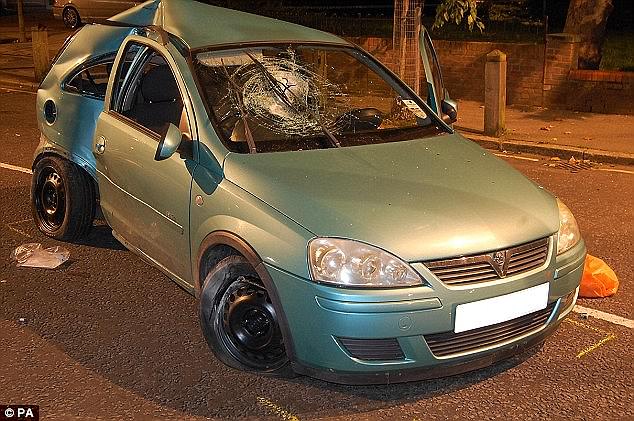 Brown drove at more than double the speed limit towards the group and a lump of concrete was thrown at the Vauxhall Corsa (pictured) he was driving, smashing the windscreen

Brown said he was visiting the area to give his condolences to a mother whose son had recently died.

‘From the evidence I have heard, no other interpretation is possible other than those or some of those in the car and the street were in some way rivals or enemies.’

The vehicle was initially bombarded with sticks and stones and Brown managed to drive away to safety, but then returned in an attempt to goad the attackers.

He drove past brothers Remi Nathaniel Moore, 24 and Shiloh Moore, 23 one more time and managed once more to escape to safety, but upon the third drive-by the lump of concrete was thrown at the car, smashing the windscreen. 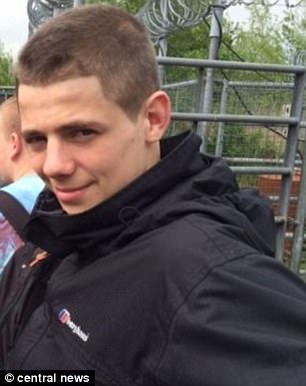 Tersham Thompson Williams, 23, was also in the car when it crashed, and was arrested for having a machete at the scene.

Reading from a victim impact statement Mr Galleze’s mother Hakima Mchue, prosecutor Ian McLoughlin said: ‘She will never forget the day that he was tragically taken away from her forever.

‘Every time the door knocks it breaks her heart to hear Nassem’s little sister shout “is that Nassem?”

‘This child has Down’s syndrome and does not understand where Nassem has gone,’ the prosecution said.

‘She was making preparations for her own father’s funeral and fears her own attention was diverted and was not there for her son.

‘She still cries herself to sleep, her family comfort her by saying time will heal her pain.’

Mr Galleze’s older sister Malika, who was 26 when giving her statement, said he was a ‘loving, caring, thoughtful and respectful young boy who was a talented footballer.’

On the day of Mr Galleze’s death, their father rang Malika and told her: ‘Malika I’m sorry. I’m sorry your brother has died in a car accident.’

She hung up the phone and screamed into her pillow, crying hysterically, the court heard.

‘She was still crying the next morning. When her children woke up she could not bear to tell them the news that their uncle passed away,’ the prosecution said.

The court heard that she was so unable to cope with the death of her brother that her children were taken away.

Both Malika and Ms Mchue said they wished it had been them in the car and not Nassem.

Brown was caught dealing class A drugs in Eastbourne, East Sussex, in May 2016.

On May 11 this year, while he was on bail for the driving offences, Brown was arrested for having £9,700 of heroin.

He pleaded guilty on June 12 this year to possession with intent to supply and possession of £7,000 cash in criminal property.

Brown’s mother was in court to see him jailed but none of the victim’s family were present.