Driver caught with two phones and eating his cereal

A motorcyclist has posted the shocking footage of a car driver appearing to eat a bowl of cereal behind the wheel of his car – while also carrying two phones in his lap.

Brett Mullineaux was on his way to work near Radcliffe, Greater Manchester, when he spotted the ‘brain dead’ commuter tucking into a bowl of Sugar Puffs.

The father-of-two labelled the driver and ‘idiot’ and said he had no idea how the car driver could believe he was in control as he was stopped at a red light.

Headcam footage captured by Mr Mullineaux shows him taking a quick glance at the man behind the wheel of the car with what he claims are two mobile phones on his lap.

‘He’s being completely irresponsible and doing something like that shows he’s really brain-dead.

‘The thing is he could have easily killed himself, or killed someone else.

Brett Mullineaux was on his way to work near Radcliffe, Greater Manchester, when he spotted a man eating cereal

‘I was just on my way to work, filtering through the traffic. At the time I didn’t realise what I’d seen. Was it a bowl of cereal? I didn’t know.’

The 44-year-old welder still has no idea how the motorist managed to drive his car and munch on his cereal at the same time.

He said: ‘I reckon he was doing the whole thing because he was late for work and I can imagine he does this on a daily basis.

‘To think he gets people seeing him doing it and he just carries on. It’s just unbelievable.’ 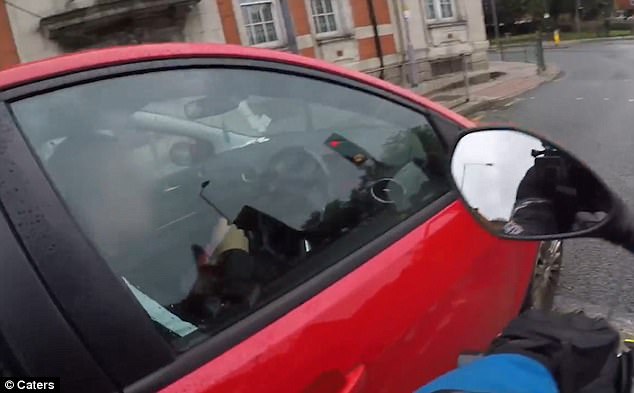 Dashcam footage shows Mr Mullineaux taking a quick glance at the car driver, who appears to be holding a bowl of cereal while the pair were stopped at a red light

Mr Mullineaux admitted it was not the first time he had spotted drivers not paying attention to the roads, but that this time he managed to get it all on film.

He added: ‘When I watched it back I realised he had the phones in his lap too.

‘He was munching on whatever was in his hands and he had both hands on the wheel so I have absolutely no idea how he was driving.

‘I mean, where would he put the bowl of cereal when he was controlling the car? Surely he would have had to keep the bowl in his hands when he was driving? 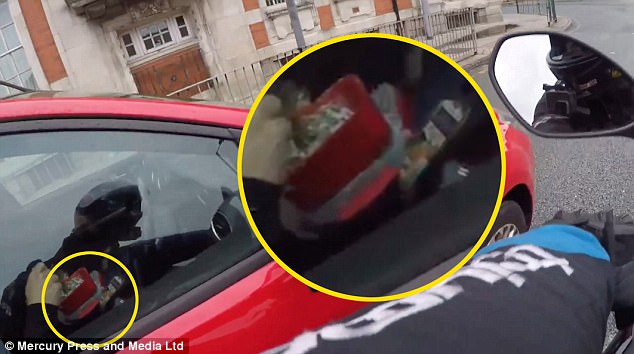 The dad-of-two also said the man had two phones near him, a Blackberry between his knees and another switched on beside him

‘They looked like Sugar Puffs to me, or something similar. I didn’t get that close to be honest and it was only when I zoomed in at home that I realised it was cereal.

‘I also don’t know how he managed to pull away from the junction when the lights changed. He had two phones with him and one of them was between his knees.

‘That Blackberry was between his knees and he had another phone switched on at the side.

‘As far as I’m concerned it’s the same story. It’s not worth it for six points on your licence and a £200 fine. It’s just not worth it.

‘That was a display of unbelievably reckless driving.’