Leroy Margolis, 29, caused a pregnant passenger to lose her unborn child when he tried to overtake a lorry and ploughed into her colleague’s car, a court heard

A reckless driver caused a pregnant passenger to lose her unborn child when he tried to overtake a lorry and ploughed into her colleague’s car, a court heard.

Leroy Margolis, 29, from Wandsworth in London, was trying to overtake a lorry when his Volvo V40 collided with a traffic island and veered into the oncoming VW Polo in the opposite lane.

Louise Abbott, 28, who was 25 weeks pregnant at the time, was a passenger in the Polo, which was being driven by her colleague Michelle Samford.

The two nursery workers were on their way to look after children at a wedding party when the incident occurred at 7.55pm on October 1 last year.

Ms Samford said her friend had ‘both her hands doubled over her bump’ when the car ‘crumpled’.

Ms Abbott was rushed to hospital in an ambulance in which her waters broke.

When she arrived at hospital she was told her baby had died from head injuries caused by seat belt trauma.

Edward Renvoize, prosecuting, said: ‘Were Mr Margolis driving carefully and competently, he would not have failed to see the lights of the oncoming vehicle.

‘This was an extremely ill-advised manoeuvre, which would have been obvious to a careful and competent motorist.’

He said his ‘driving fell far below the standards of what one would expect for a careful and competent driver.’

Jurors heard the speed limit on the road where the collision happened is 50mph, and Margolis was not driving fast enough to overtake the lorry ahead.

The court was also told the crash happened in the dark, with heavy rain and strong winds making conditions dangerous on the road.

Ms Samford, the driver of the VW Polo in which Ms Abbott was injured, was not present in court, and prosecution read her statement.

It said: ‘I was driving my car which is blue VW, also in the car was my friend Louise, who was clearly showing and had a perfect neat little bump.

‘As I saw the oncoming car speeding towards us, I couldn’t do anything, I realised we were going to crash.

‘There was a crash, a bang, I could hear the car crumple around me, I could hear Louise screaming, she had both her hands doubled over her bump.’ 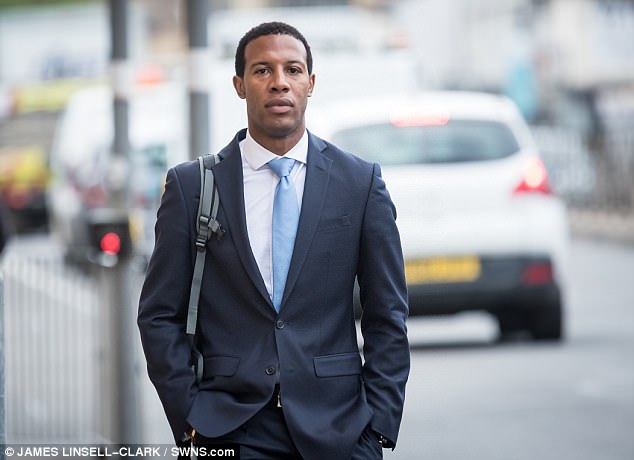 Margolis was driving a Volvo V40 when the incident took place on October 1 on the A1307, Linton Bypass in Cambridgeshire

Prosecutor Mr Renvoize also read Ms Abbott’s statement, which said: ‘At the time of the crash I was 25 weeks pregnant with my first child, the baby was due on January 11.

‘I was wearing my seat-belt. We were passing the BP station and I saw a car on our side of the road overtaking. I thought he was cutting it fine.

‘The oncoming car hit a bollard, rebounded and came to us sideways.

‘Our car was pushed to the left, the airbags went off and there was smoke.

‘I got out of the car on my knees, I was in excruciating pain from my pelvis.

‘A man came round asking me how everyone was and saying he had called an ambulance.

‘No one could see the car that had hit us as it was in the bushes at the side of the road.

‘A lady came over and said she was an off duty nurse…she comforted me until the ambulance arrived.’

Prosecution read Margolis’ interview with PC Terry Nesbit, which said: ‘I had just come back from dropping my sister off at her friends.

‘There was a lorry in front of me, I went to overtake the lorry, and as I was completing the manoeuvre, I saw a pole and an island in front of me that I couldn’t avoid.

‘I was confident it was safe to do the manoeuvre, I can’t remember if the road was wet on the night, I have a feeling there may have been a shower before.

‘The road surface was probably just damp, I didn’t see the sign on the island, I can’t offer any explanation…I can’t really say much more than that.

‘The next thing I knew I was swerving over the road into oncoming traffic and I ended up in some bushes. I was concentrating fully.

‘When I went to make the manoeuvre, I can only say that I thought it was safe to do so, I was confident that I could complete the manoeuvre safely.

‘I can recall the car sliding sideways and myself colliding with the other car…my only thought was to get out of the car.’

Defence Oliver Jarvis suggested to PC Nesbit there was in fact no bollard in the road for Margolis to see.

PC Nesbit said he only saw debris when he arrived at the scene and did not look to see whether there had been a bollard there.

Witness Andrew Dixon, a former driving instructor, who saw the collision happen, said: ‘I would never have undertaken that manoeuvre in a million years.

‘It was suicidal driving as far as I was concerned, all I remember thinking is, ‘there’s no way he’s gonna make it and if there’s a car coming the other way, this is not gonna be good’.

‘There’s no lighting on that stretch of the road, it was dark, the conditions were atrocious.

‘You had no forward visibility at all, even in good conditions, you wouldn’t be able to see the road ahead.’

It happened on October 1 last year on the A1307, Linton Bypass in Cambridgeshire.

Ms Abbot, from Braintree, Essex, fell pregnant again and has since given birth to a baby girl. She was not present in court.

She thanked the staff at Rosie Maternity Unit, and Addenbrooke’s hospital where she was treated after the accident.

Margolis is being tried for the charge of serious injury by dangerous driving, which he denies.