This is the moment a driver risked seriously injuring a cyclist when he drove over his bicycle after the teenager fell off.

The motorist sparked fury online after they were caught on camera nearly hitting the man’s leg.

The incident took place at a set of traffic lights on the Victoria Embankment in central London.

In the footage the young cyclist appears to fall off his bike while at a set of red lights – and is blocking part of the carriageway.

But instead of waiting for him to get back up, the driver to his right appears to accelerate towards the cyclist.

The car can be seen driving over one of the wheels, and narrowly misses hitting the cyclist’s leg which is trapped by the bike.

The car then speeds off as the cyclist is left to pick up his damaged bike.

Footage of the incident was uploaded onto social media over the weekend by a biker named Patrick, who captioned the post: ‘Nothing to say.’ 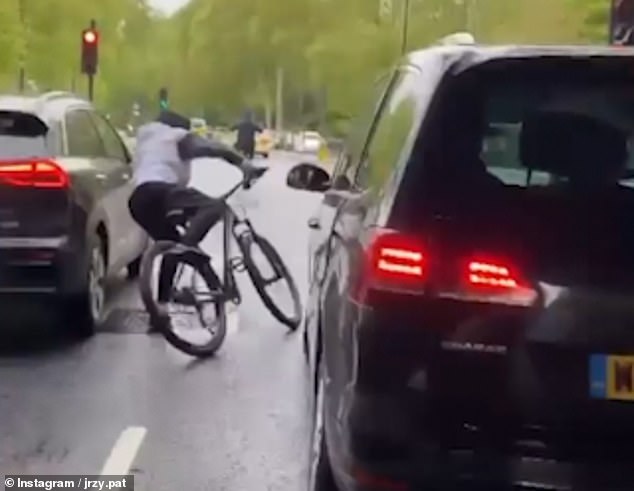 He said that police had been contacted about the incident.

Patrick, who is believed to have filmed the collision, has an Instagram account with several videos showing cyclists doing wheelies and swerving in and out of cars.

The incident has sparked a furious reaction from cyclists and campaigners including radio host Jeremy Vine, who said: ‘Why the hell would the driver on the right move forwards in this situation?’ 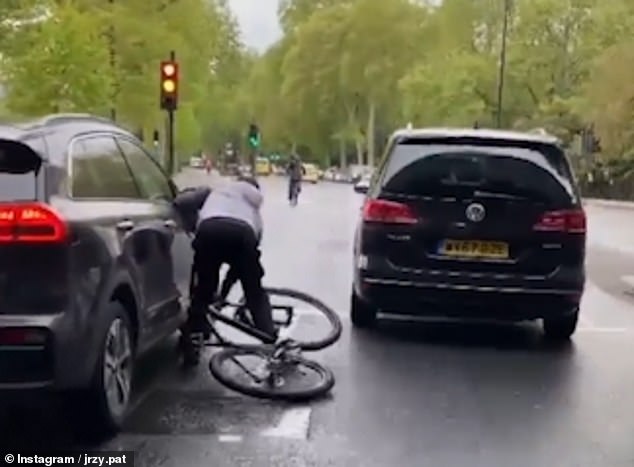 But instead of waiting for the teenager to get back up, the driver to his right drives forward over his wheel before speeding off 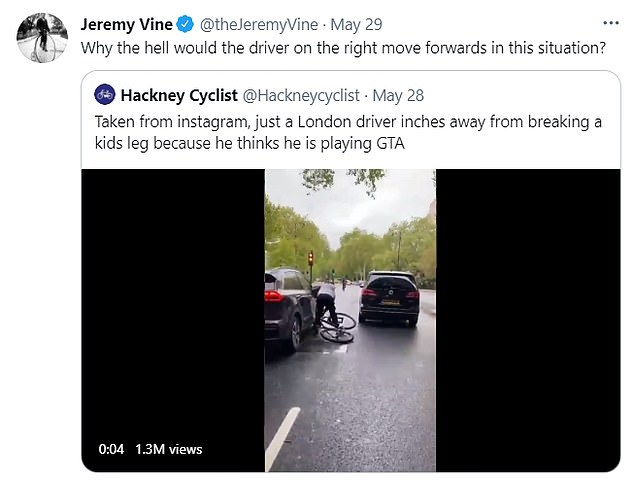 Cycling campaigner Hackney Cyclist said: ‘Just a London driver inches away from breaking a kid’s leg because he thinks he is playing Grand Theft Auto.’

Carl James commented: ‘Whatever the cyclist did prior to that, nothing, absolutely nothing justifies the actions of that driver.

‘If the driver had gone over his leg, the long term damage is unthinkable.’

Dave Vasse added: ‘Atrocious. I am appalled by this but, speaking as an experienced road biker, I say that this kind of road rage is happening every day all day in the UK.’