This reckless van driver ploughed into a level crossing barrier onto the railway tracks risking his life and causing ten hours of delays to train services.

CCTV footage shows the van forcing its way over the tracks Sunningdale, Berkshire, despite warning lights being active for more than 10 seconds.

The incident that will cost taxpayers more than £60,000 has been slammed by Network Rail.

Network Rail level crossing manager Mark O’Flynn said it was only through ‘sheer luck’ that no-one was injured by the driver’s ‘reckless actions’.

He continued: ‘People often underestimate the danger at crossings and how quickly trains are travelling.

‘When you don’t follow the rules it’s not just your life you’re putting at risk.

‘Shaving a couple of minutes off your journey is simply not worth it.’

Investigating officer, Pc Joel Freeman-White, of British Transport Police, said Goagara ‘put himself and others in danger’, risking his life and that of the train driver and passengers. 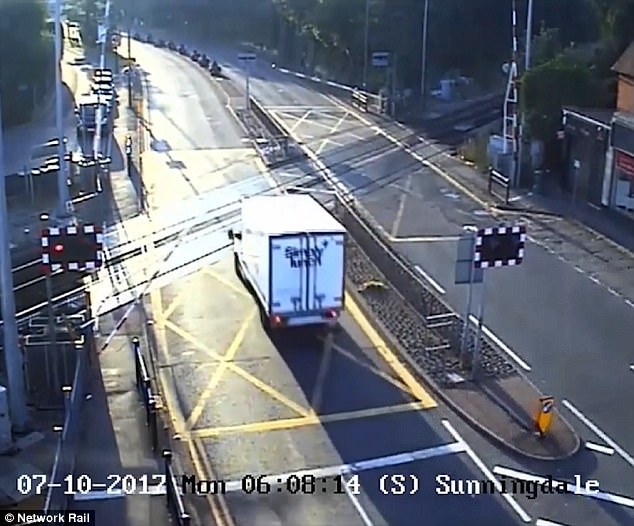 CCTV footage shows the van forcing its way over the tracks Sunningdale, Berkshire, despite warning lights being active for more than 10 seconds

He continued: ‘I’m pleased that he has been convicted of this criminal offence and hope that his case will be a warning to other motorists or pedestrians who might be tempted to misuse level crossings.’

There were six accidental fatalities at level crossings in Britain in 2016/17, Rail Safety and Standards Board figures show.