Driver survives after a pole speared through his CHEST

A driver has narrowly escaped death after a steel bar pierced through his chest during a car crash on a motorway in south-west China.

The 33-year-old man was pinned onto the driver’s seat as one of the poles penetrated the car and speared straight into his right chest.

Rescuers had to carry him together with the seat to the hospital before doctors removed the pole from his body after a seven-hour operation. 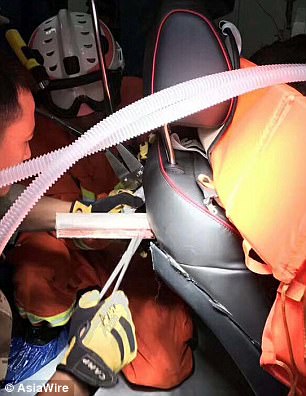 Pictured: A pole pierced through the vehicle and straight into the driver’s chest before coming out from the car’s seat 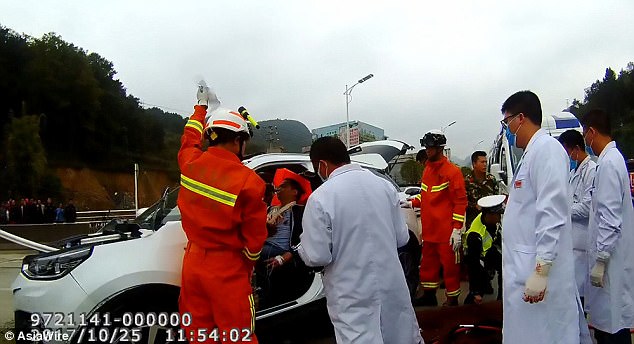 The driver crashed his car into the safety barriers on a highway in Guizhou, south-west China

According to Guiyang Evening News, the man, whose name has not been revealed, was taking his wife to work at 11am on October 25 in Changshun county of Guizhou Province.

CCTV footage obtained by Central China Television shows the moment a white car steering away from the lane and crashing into a row of safety barriers that separated opposing lanes of traffic on the highway.

A section of the barriers pierced through the front of the car and into the driver’s right chest.

Firefighters, paramedics and police arrived at the scene quickly.

In order to avoid hurting the driver again, they removed the driver’s seat from the car and sent the patient, who was pinned to the seat, onto the ambulance. 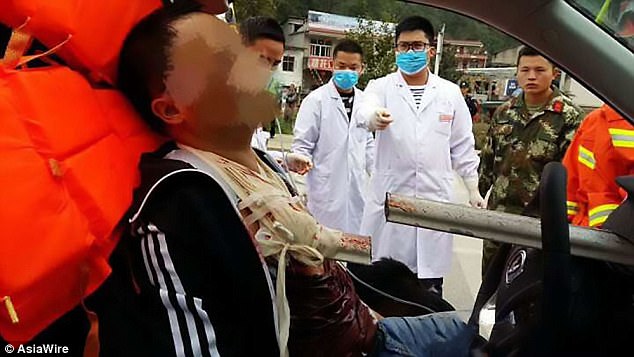 The man’s father was notified and he rushed to the hospital.

Dr Shen Zixuan, at Affiliated Hospital of Guizhou Medical University, told the reporter that the patient was sent in for emergency surgery.

‘It’s reported that the man appeared in a state of shock due to excessive blood loss during the journey to the hospital. Firefighter are called in to remove the chair from the pole before further process could carry on,’ Dr Shen explained.

The patient was then transferred to the operation theatre and was given general anesthetic. 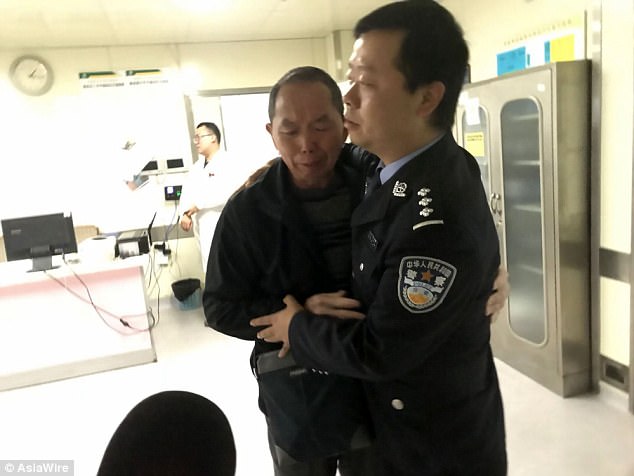 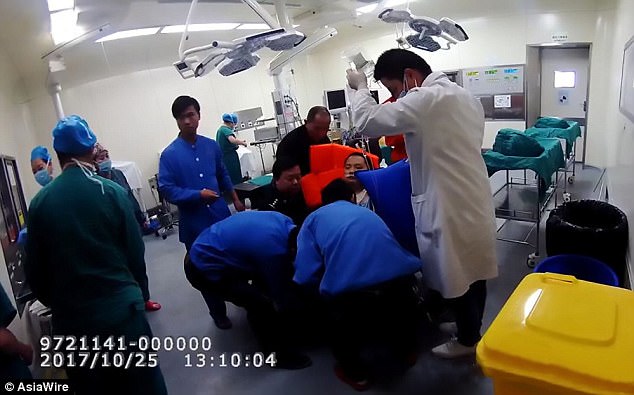 Doctors spent hours to remove a 1.3 ft long pole from his chest and treated the wounded area

They also removed the damaged tissues of the right lung and repaired the blood vessels around the wounded area.

It’s reported that doctors had infused 800ml of blood and 1600ml of red blood cells to the patient in the surgery, which lasted for seven hours.

He is now transferred to intensive care unit for further observation.

Guizhou police are investigating the cause of the accident.