‘We make love, we’re all adults here’: Man, 20, who plowed his car into a field told deputy his breath smelled of alcohol because he had been ‘making out’ with his intoxicated girlfriend

A 20-year-old man who plowed his car into a field claimed that he had alcohol on his breath because he had been ‘making out’ with his intoxicated girlfriend.

The driver, who has not been named, was found in a field near the intersection of North Brimfield and West Cahill in Peoria County, Illinois, on Saturday at around 7.20pm.

‘(He) told deputies that the reason he smelled like alcohol was that he had been making out with his girlfriend and she had been drinking,’ the police report obtained by the PJ Star said.

‘(He) also told deputies he made love to his girlfriend because “we make love; we’re all adults here.”‘

The man plowed into a field close to the intersection of North Brimfield and West Cahill in Peoria County, Illinois, (pictured) on Saturday at around 7.20pm

When the deputy first approached the car it allegedly stunk of marijuana and the suspect said something to the officer that ‘did not sound like English.’

The suspect then ‘asked me for a lighter and said that it was “100 percent English” and began swearing, the deputy said in the report.

The driver initially resisted arrest before the deputy forced him from the car and put him in handcuffs. The driver then began sobbing.

He refused to be breathalyzed and failed the field-sobriety test so was arrested on a DUI. 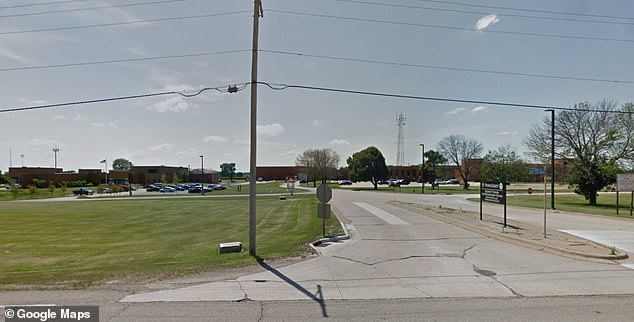 The driver claimed to have taken prescription pills which had made him sleepy.

But the police officer had seen an empty Miller Lite can in the car, as well as a soda can which smelled of booze.

The suspect later admitted to drink driving and was cited for two counts of DUI and two traffic violations at Peoria County Jail, the PJ Star reported.