Driver with baby takes a wide turn and slams into oncoming car in Rockingham, Western Australia

The terrifying moment a driver with a child in a baby seat smashes into an oncoming car has been caught on dashcam.

Footage shows a silver Holden taking a wide corner in Rockingham, Western Australia, while the driver makes an obscene gesture at another motorist and ends up on the wrong side of the road.

The owner of the vehicle with the dashcam beeps and slams on the brakes, but is unable to prevent a collision.

Footage shows a silver Holden taking a wide corner in Rockingham in Western Australia, and ending up on the wrong side of the road 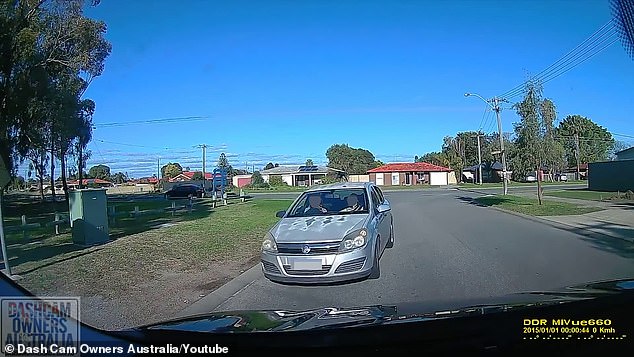 As they continue to approach the dashcam driver, the motorist in the silver Holden appears to take his eyes off the road

Is the Holden driver at fault?

Two loud thuds can be heard in the video before the Holden comes to a stop and a baby begins to cry.

The man behind the wheel rushes out to check on his baby, signalling to the dashcam owner with his hand to ‘hold on’.

The footage has raked in more than 100,000 hits, with some viewers slamming the Holden driver for his recklessness, saying he was paying attention to the vehicle behind him instead of watching where he was going.

‘He is giving the finger to the black car behind him, looking back. He never looks at the road he turned onto, until just before he hits the SUV,’ one person wrote.

‘Too busy abusing the car behind him and sticking his finger up as he turned the corner to not see what was around the corner,’ another commented.

‘How do you turn without looking with a child in the car too. So irresponsible,’ another said.

‘You can see in the vid he’s too busy flipping off the Holden that goes by just after he turned in. He’s not even looking where he’s going till he was on the curb,’ another wrote. 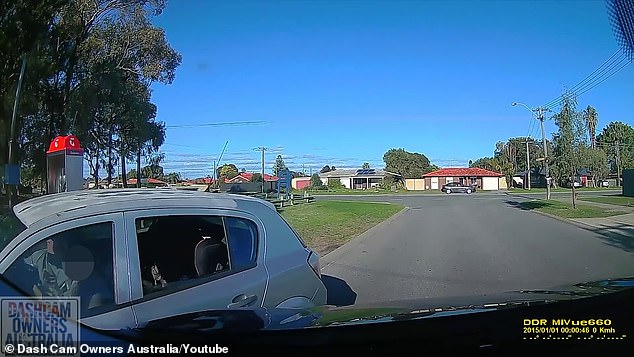