Drivers could only need an MOT every two years and could be allowed to delay their vehicle’s first MOT by a year under Government plans to cut costs for drivers – despite serious concern from motoring groups.

Today the Department for Transport said it has launched a consultation on proposals to require new cars, motorbikes and vans in Britain to have their first MOT four years after they are registered, compared with three years currently.

Views on the frequency of MOTs – which under existing regulations are every 12 months after the first test – are also being sought. A government consultation document says: ‘We are considering if it is appropriate to move to testing every two years rather than every year, reflecting the progress in improving vehicle safety.’

The DfT said it wants to ‘ensure roadworthiness checks continue to balance costs on motorists while ensuring road safety, keeping up with advances in vehicle technology, and tackling vehicle emissions’.

But the AA president has strongly discouraged the Government from extending a car’s first MOT to the fourth anniversary due to road safety concerns.

An RAC representative has also slammed the Government for ‘entertaining the idea of increasing the time between MOTs’ and said their research shows drivers believe it would be ‘dangerous’.

Drivers can be fined up to £1,000 for using a vehicle without a valid MOT (stock image)

AA president Edmund King said: ‘The MOT plays a vital role in ensuring that vehicles on our roads are safe and well maintained, and while not a formal recommendation, we totally oppose any change from an annual MOT.

‘Last year, 83% of drivers said that the annual MOT was ‘very important’ for keeping our cars and roads as safe as possible, which highlights why an annual MOT must remain in place.

‘With one in 10 cars failing their first MOT, we strongly discourage the Government from extending a car’s first MOT to the fourth anniversary due to road safety concerns.’

RAC’s head of roads policy Nicholas Lyes added: ‘While we’re not opposed to delaying a new vehicle’s first MOT, we believe there should be a requirement for particularly high mileage vehicles to be tested sooner.

‘If the Government is looking to improve the MOT, now is the ideal time to take into account how much a vehicle is driven alongside the number of years it’s been on the road.

‘We’re also disappointed the Government is still entertaining the idea of increasing the time between MOTs.

‘Our research clearly shows drivers don’t agree with this and believe it’s dangerous.’ 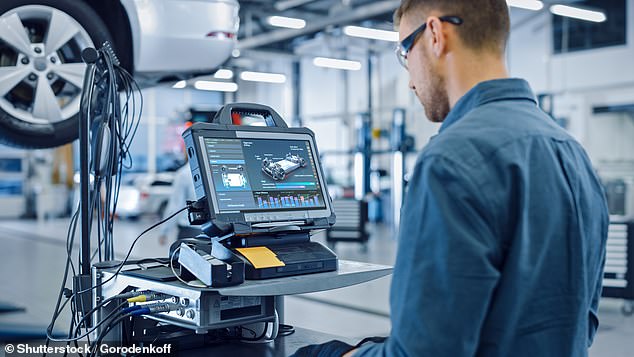 AA president Edmund King said: ‘The MOT plays a vital role in ensuring that vehicles on our roads are safe and well maintained’ (stock image)

Drivers can be fined up to £1,000 for using a vehicle without a valid MOT.

The tests check a number of parts such as lights, seatbelts, tyres and brakes to ensure they meet legal standards.

The DfT said MOTs cost an average of £40 and delaying the first test for new vehicles could save motorists around £100 million a year.

It said ‘major developments in vehicle technology’ have increased road safety since MOTs were introduced in 1960, such as lane-assisted driving.

Conducting the first roadworthiness tests for new vehicles after four years is ‘already standard practice’ across many European countries including Belgium, Denmark, France, Italy, Spain and Portugal, the DfT said.

It said the number of casualties in crashes caused by vehicle defects is ‘low’ and Government analysis shows delaying the first MOT ‘should not impact road safety’.

In September the RAC said: ‘Drivers have serious concerns about the Government’s plans to change the compulsory MOT from every year to every two years to reduce the cost of living, with many believing it will lead to a rise in the number of unsafe vehicles on the road.’

Their research showed 55 per cent of 1,435 drivers surveyed said they felt changing the MOT to every two years was a bad idea.

When asked why they felt it was a bad idea, 98 per cent said it would result in more unsafe vehicles on the road and 20 per cent believed it would lead to an increase in the number of collisions on the road.

Nearly two thirds thought it would end in more vehicles breaking down.