Motorists and passengers remain stranded on the M3 while bomb disposal experts tackle a mysterious hazard on the carriageway.

The motorway, the main road between London and Southampton, remains partially closed between junctions 9 and 11 after emergency services were called to the scene just before 4am on Saturday.

Motorists reported being stuck for hours as a result of the “chaos”, while others risked injury by driving the wrong way down the hard shoulder.

Manchester United fan Paul Hibbert was travelling with his friends to see his team play Southampton but decided to leave the coach and make the one-and-a-half-mile journey to Winchester station by foot, walking along the hard shoulder to junction 9.

The 53-year-old, from Manchester, said: “People here are driving up the hard shoulder.

“One of those idiots has hit a car that pulled out in front of him – it’s chaos.

“We got the National Express at quarter past midnight to London and got the 8am bus to Southampton – it’s 1pm now.”

Social media users shared pictures of the scene, with one showing a man walking his dog on the hard shoulder, others playing golf, and another doing a handstand on the carriageway.

Witness Jenna Keating, 31, a writer from Windsor, told the Press Association: “There are lots of people stranded here, people have got out of their cars to stretch their legs and things, but some are just turning round and going back down the hard shoulder.

“We actually spoke to police about this to see whether this was something we could do in the circumstances and they said ‘absolutely not’.

“They also said the delay had been quite well advertised, although none of the four of us in the car saw anything until we were in it.

“We’re one of the lucky ones, we’ve only been here for 40 minutes although we’ve basically only crawled forward into space probably left by those who are trying to turn around.

“I can’t think it’s a good idea to use the hard shoulder – there have been a couple of unmarked vehicles with sirens blaring coming up and using it, so it’s pretty dangerous if there are cars coming in the other direction.”

George Vitelis, stranded at Winchester service station since around 9.30am, said the incident brought out “the best of the British spirit”.

He said: “I’m lucky because I’m in the service station, I have use of the facilities, it is lovely and warm and people are just getting on with things.

“There’s not a lot we can do so some guys just took out their golf clubs and are just practising a few strokes.

“It’s quite a strange situation – there are babies having their diapers changed next to the M3, guys playing golf, people having picnics.

“The sun is shining, the weather is warm, I’m quite happy here to be honest. It would be different if I was stuck in the car with a load of screaming kids, but I’m not.

“It’s moments like this that you see the best of the British spirit.

“I was heading down to the boat show in Southampton but that probably isn’t going to happen now. I’ll just go tomorrow instead, it’s no problem.”

Police said they were called to the scene at 3.49am to reports of “potential hazardous material in the road”. 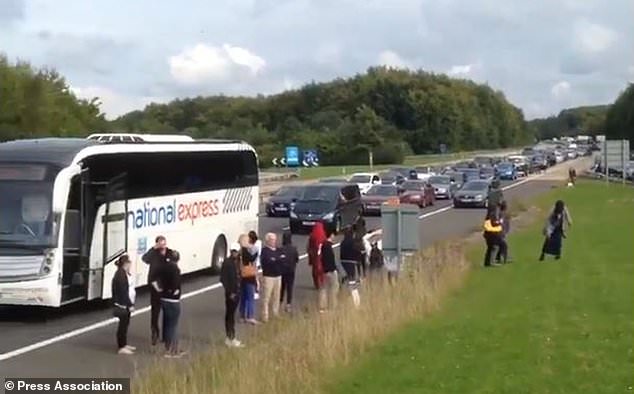 The eastbound carriageway was opened at around 1.40pm while bomb disposal units worked on the issue.

A police spokesman said he was unable to confirm the nature of the cargo, whether it was placed deliberately on the carriageway or whether it was an accident.

A force statement added: “Our officers are working alongside partners from Hampshire Fire and Rescue Service and the Explosive Ordnance Disposal (EOD) team to establish exactly what it is.” 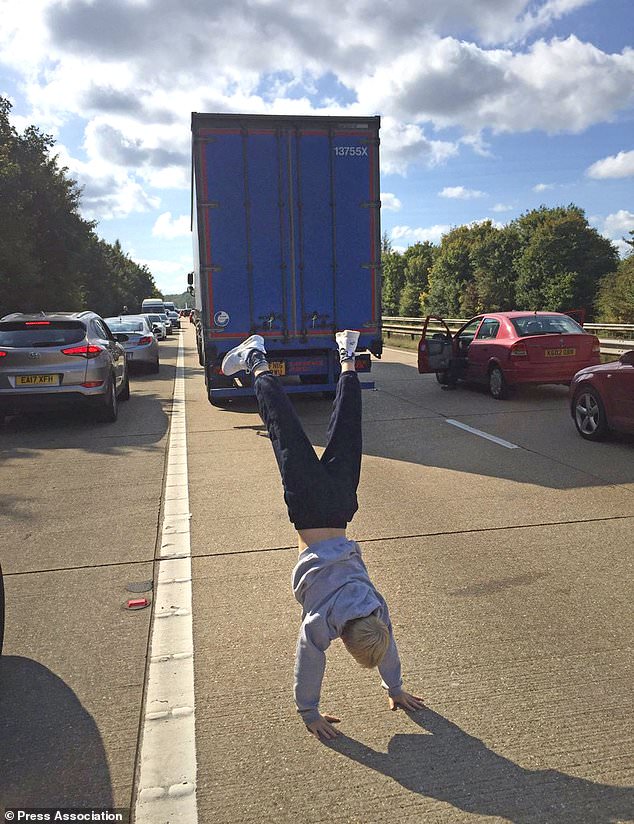 Handstand on the M3

It is the second time this week travellers have been left frustrated by motorway closure.

On Tuesday, thousands sat in gridlock for several hours when Thames Valley Police closed the three-lane motorway of the M1 between junctions 14 and 15 because of a “suspicious object”.

Footage broadcast by the BBC showed a bomb disposal robot dragging a black rubbish bag off the hard shoulder, which appeared to have contained a liquid and yellow substance.