Johan Vandenhecke taught himself drone photography by watching ‘a ton of YouTube videos’ – and it’s clear he was paying attention.

Because his aerial snaps are sensational. And now he’s set up a drone photography masterclass to save budding amateurs the hassle of churning through endless online videos like he did.

The Belgian kick-started his portfolio two years ago on a trip with his girlfriend through Southeast Asia, Australia and South America after they quit their jobs. And Instagram was duly impressed after he began posting images to the site (as johan_drone_adventures) – he now has almost 20,000 followers.

A shot by Johan of the enchanting islands of Komodo National Park, which he described as ‘paradise on earth’ 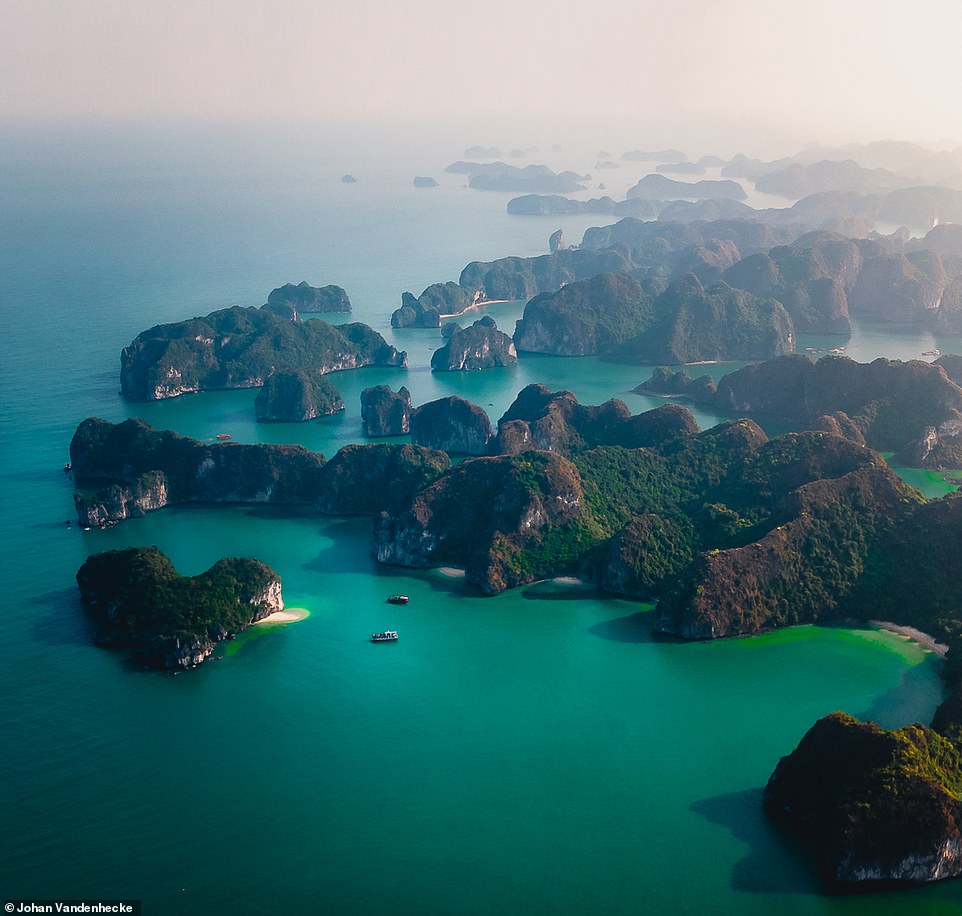 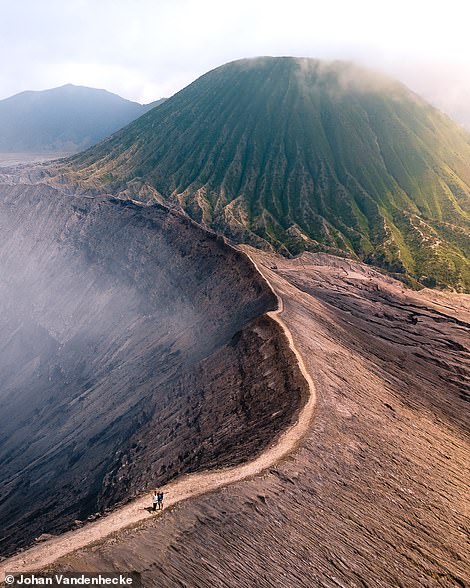 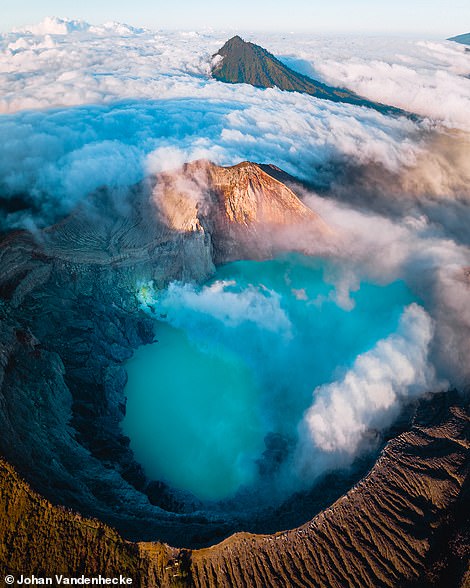 On the left is a stunning picture of Bromo Tengger Semeru National Park in East Java, Indonesia, which is home to several huge volcanoes, some having formed inside the caldera of an even more colossal ancient volcano. This image shows Mount Bromo and neighbouring Mount Batok. Johan said ‘it’s really an extraordinary sight to see’. On the right is the jaw-dropping Kawah Ljen volcano, which Johan said was ‘the absolute highlight’ of his East Java trip. Its caldera is one kilometre wide and contains a highly acidic blue lake

Further validation of his skills crystallised this year through photo competitions run by Agora – snaps he submitted were shortlisted in its aerial, landscape and travel contests.

It’s no wonder he described his round-the-world odyssey as ‘a life-changer’.

Indonesia, it seems, took the top podium spot for highlights.

Johan, 36, told MailOnline Travel: ‘This trip was a life-changer for me. I used it to have a clean slate and experience the world in an unbothered mindset, nothing holding me back. 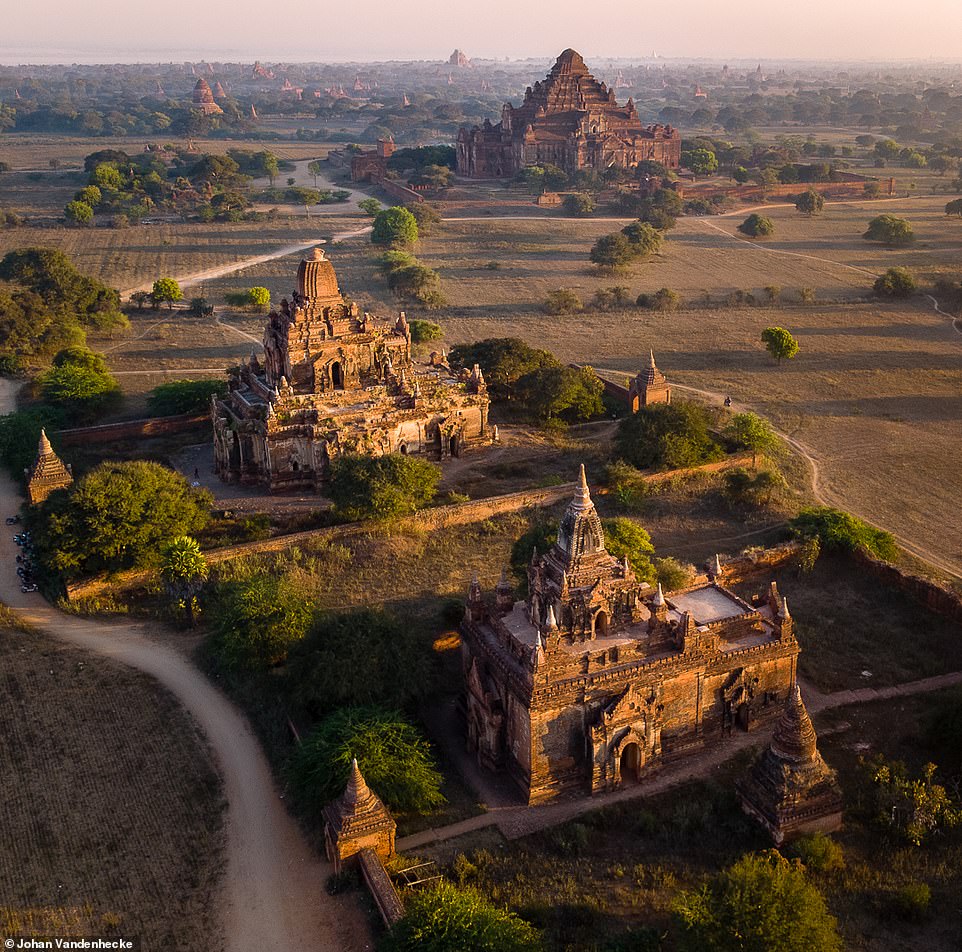 A mesmerising shot of the ancient city of Bagan, a Unesco-listed site in Myanmar that’s home to thousands of pagodas and stupas – stone-laced burial mounds. Johan said: ‘You literally see pagodas everywhere you look. Some bigger than others, but all very cool to see’ ⁠ 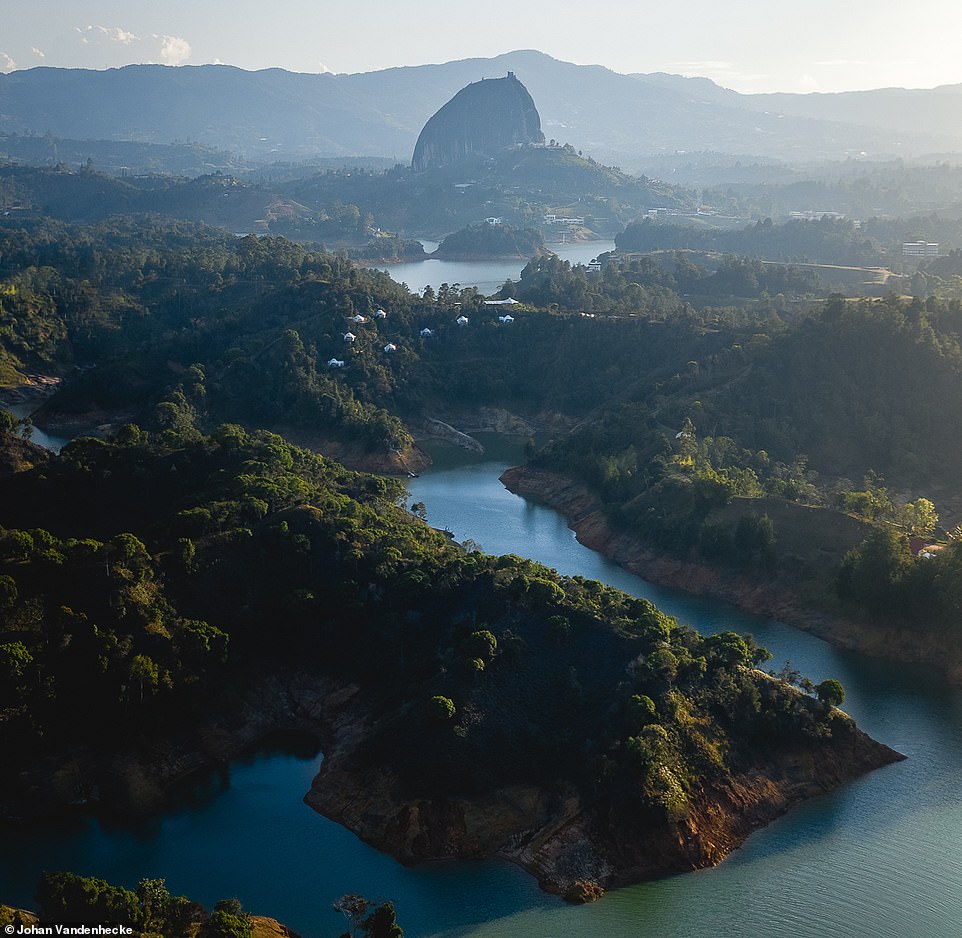 In the background of this amazing shot, taken in Colombia, is the 10-million-ton El Peñon de Guatape rock, which features a stone staircase embedded in a large crevice. In front of this are the Bosko glamping mushrooms, scattered around a forested hill 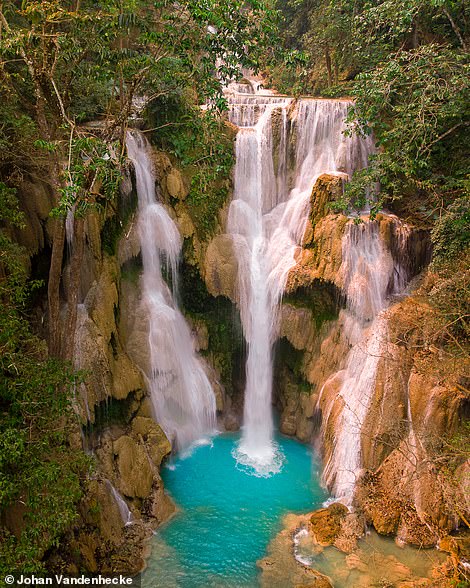 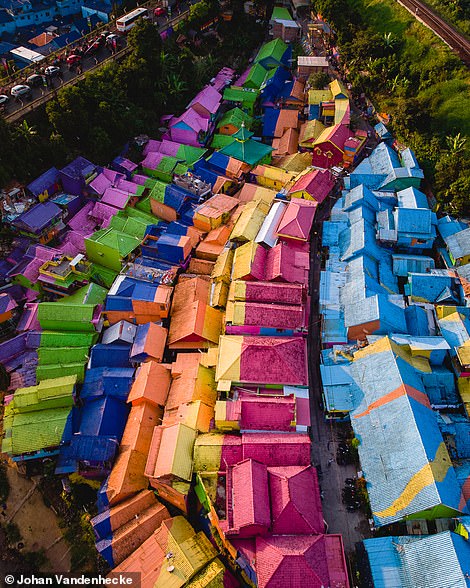 On the left, we invite you to behold the three-tiered Kuang Si Waterfall in Laos, which some say, as Johan points out in his Instagram caption, is the most beautiful waterfall in the world. On the right is the dazzling ‘Rainbow Village’ in the city of Malang in Indonesia

‘I think from our entire trip, Indonesia really stole our hearts in terms of diversity of landscapes and just the general good vibe there.

‘We visited several islands and each was unique in its own way. I would recommend putting this high on your travel list.

‘And definitely don’t miss out on the Komodo National Park. That for me is paradise on earth. I’ve taken some of my best drone photos there. But it’s equally spectacular underwater.’ 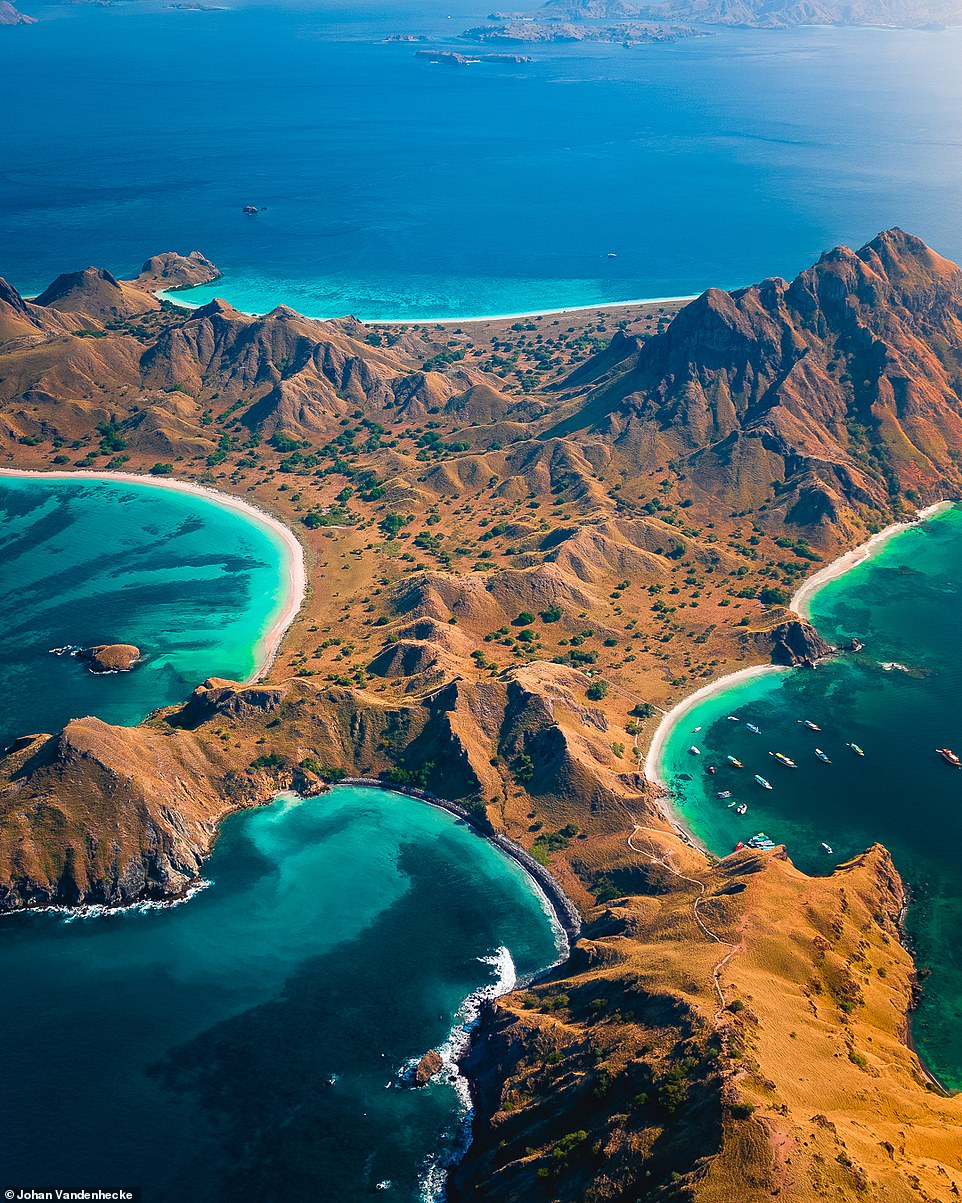 The stunning Padar Island in the Komodo archipelago, where visitors can relax on a pink-sand beach 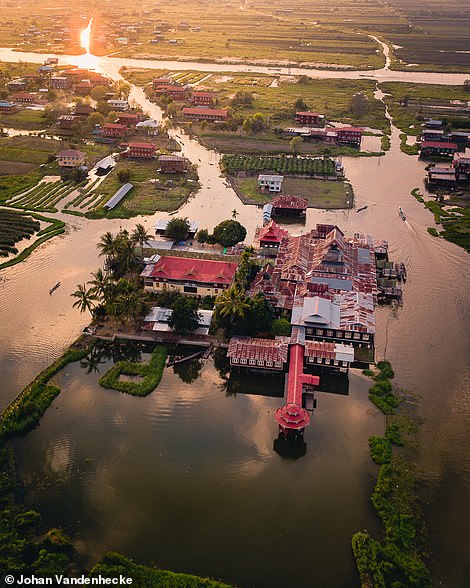 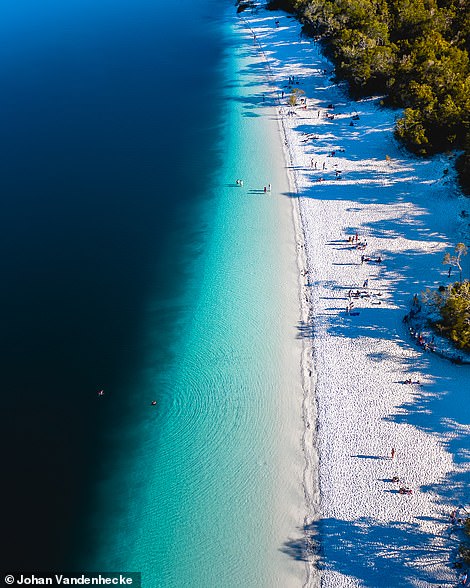 Water world: On the left is the fascinating Nga Phe Kyaung monastery, which rests on stilts on Inle Lake in Myanmar, along with a multitude of rustic wooden houses. Johan took the shot at sunset. Pictured right is the stunning white sand beach at Lake Mckenzie on Fraser Island in Queensland, Australia. Johan said it was ‘a dream’ to spend time there

Johan continued: ‘I was really surprised by Colombia in a positive way. This country really has it all. And I totally did not have this in my mind beforehand. You go from tropical beaches with clear blue water, to lush green forests with incredible waterfalls, to coffee farms in the hilly mid-land, to fantasy-coloured rivers, to glaciers in the mountains, to rock deserts… all within one country and generally just a couple of hours away from each other.’

The Galapagos Islands, however, proved to be disappointing.

Johan explained: ‘I expected the Galapagos to be similar in awesomeness to the Komodo National Park. However, we were both disappointed by the features of the islands themselves and also how expensive it is. 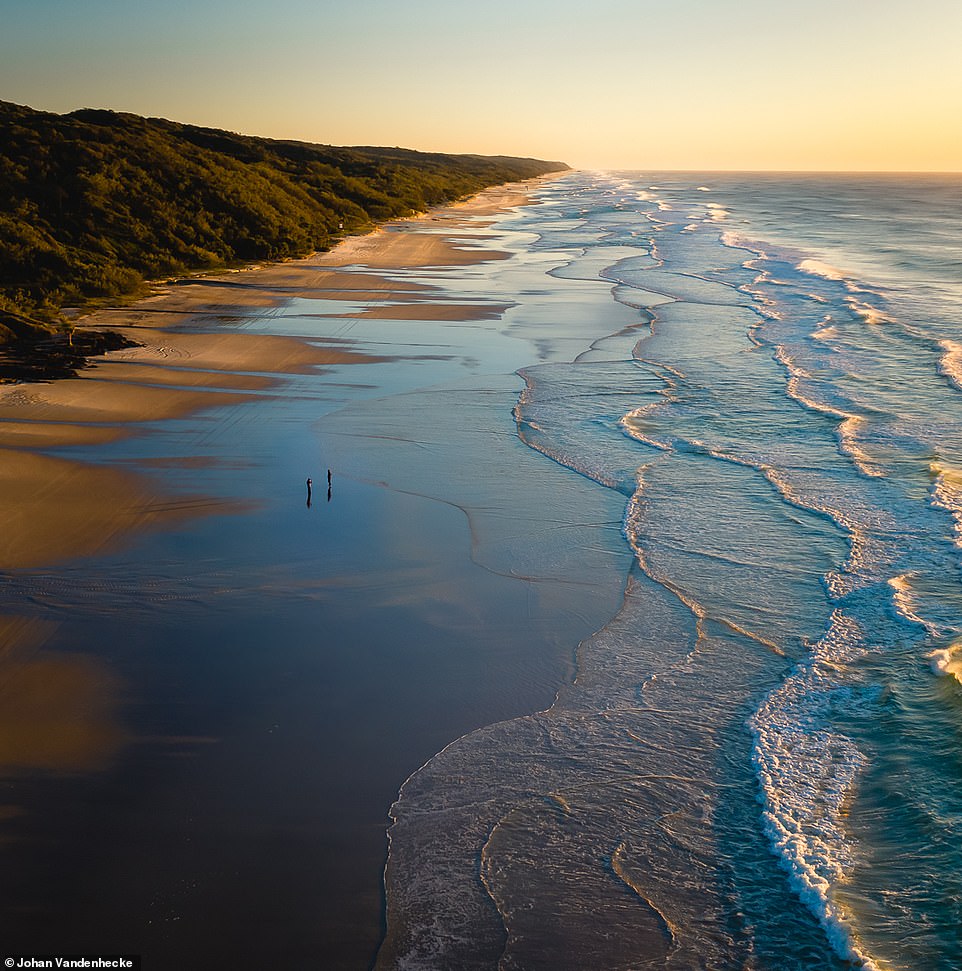 A ‘magical’ sunrise captured by Johan on Fraser Island. One Instagram commenter said ‘it doesn’t get much better than that’ 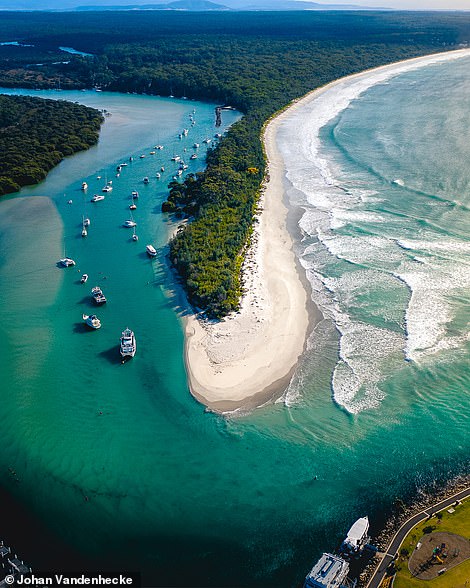 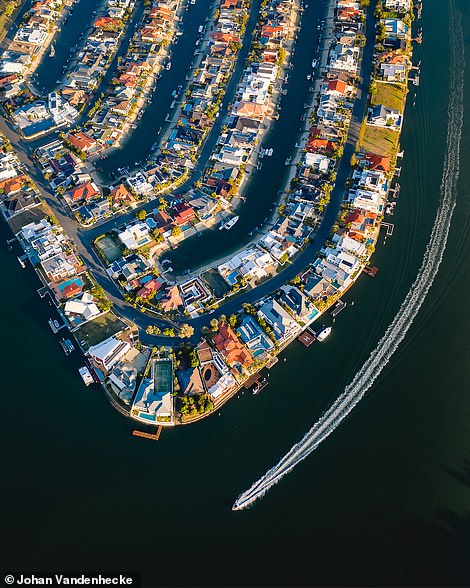 On the left is Jervis Bay in New South Wales, Australia, which Johan describes as being ‘beautifully shaped’. On the right – luxury villas on Queensland’s Gold Coast

‘I did see several hammerhead sharks during the scuba diving, so it definitely wasn’t all bad. If you like big marine animals, then this is a great – expensive – place for you.’

This take on the famously wildlife-rich archipelago might surprise some, but Johan stressed that he was comparing it to other amazing sights.

He added: ‘I don’t want to sound like a spoiled brat, but it is true that after a long time travelling you do sort of get used to the daily adventures and incredible sights. And inevitably, you start comparing. And in this regard, we were disappointed value-for-money wise.’ 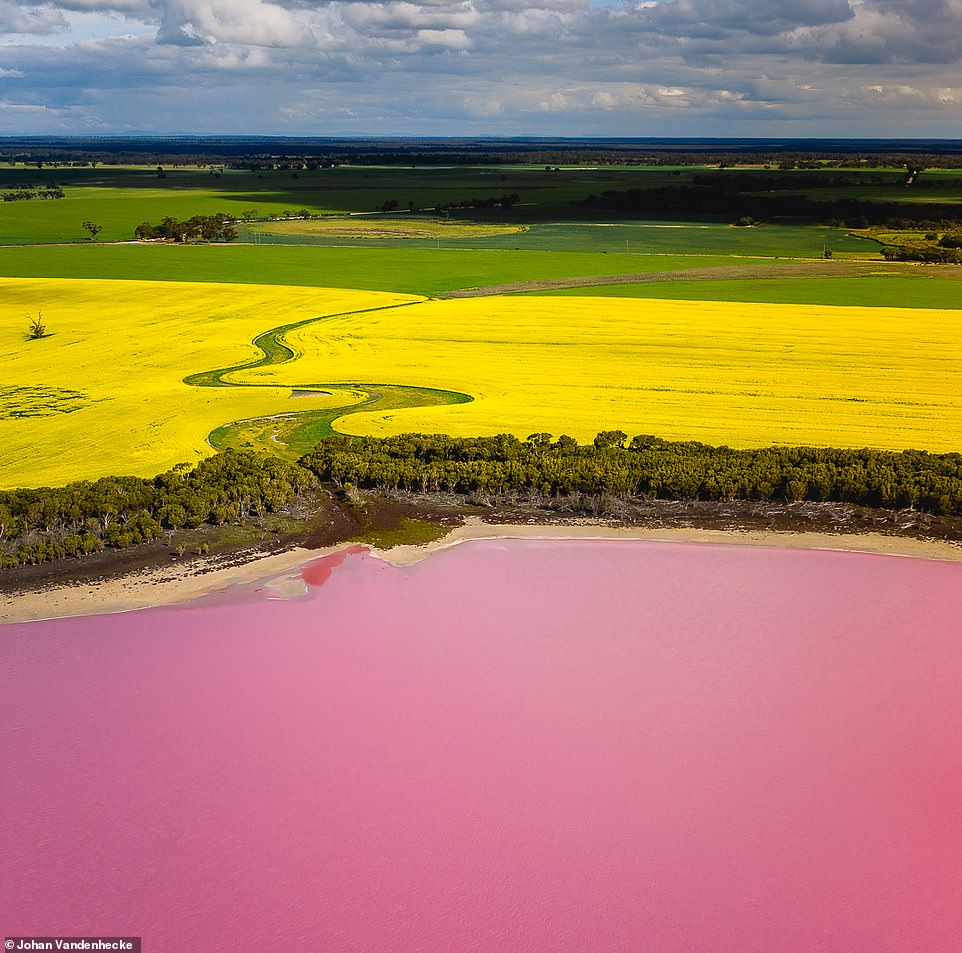 Hue goes there: One of South Australia’s eye-popping pink lakes 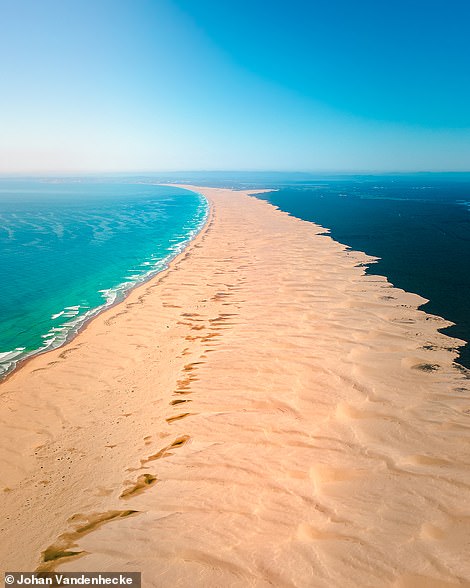 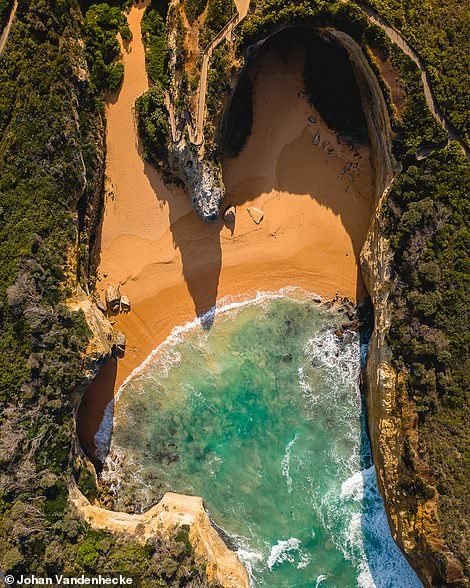 On the left is Anna Bay in Australia’s New South Wales. Johan said: ‘I like how this unnatural looking desert stripe seemingly splits the ocean from the forest on the right.’ On the right is one of Johan’s most-liked pictures on Instagram. It shows the tear-shaped Loch Ard Gorge, named after a ship that ran aground nearby in 1878. The sole survivors, two teenagers, managed to struggle ashore to the beach in the gorge

Johan said that certain landscapes lend themselves to drone photography.

He revealed: ‘Water is great for drone photography. You’ll find water in 75 per cent of my images. Because usually it gives you an amazing colour contrast between the blue water and the oranges in the beach, for example. Just make sure to use a polarised filter for best results.

‘I also look for steep altitude differences. Like cliffs, canyons, mountains and so on. That’s another great feature to use in drone photography. Because you can really position the drone in a way that showcases that steep cliff from the outside, in a way that normal photography would never be able to do.’

Johan said that some of the common drone photography mistakes that amateurs make include shooting in Jpeg – ‘which doesn’t allow them to edit their photos to the same extent afterwards’ – they ‘try to go as high as possible, while a good drone photo is usually not that high up’; they shoot the view, ‘and don’t think about composition’, and ‘most of the time the skies are overexposed’.

His two ‘most valuable’ tips are to shoot during the golden-hour light – ‘sunrise or sunset’ – which will ‘make your photo just look magical’ and, a technical one this, ‘check the AEB (automated bracketing) mode, which helps you get more detail in the highlights, a bright sky with some clouds for example, while still having all the details in the shadows’. 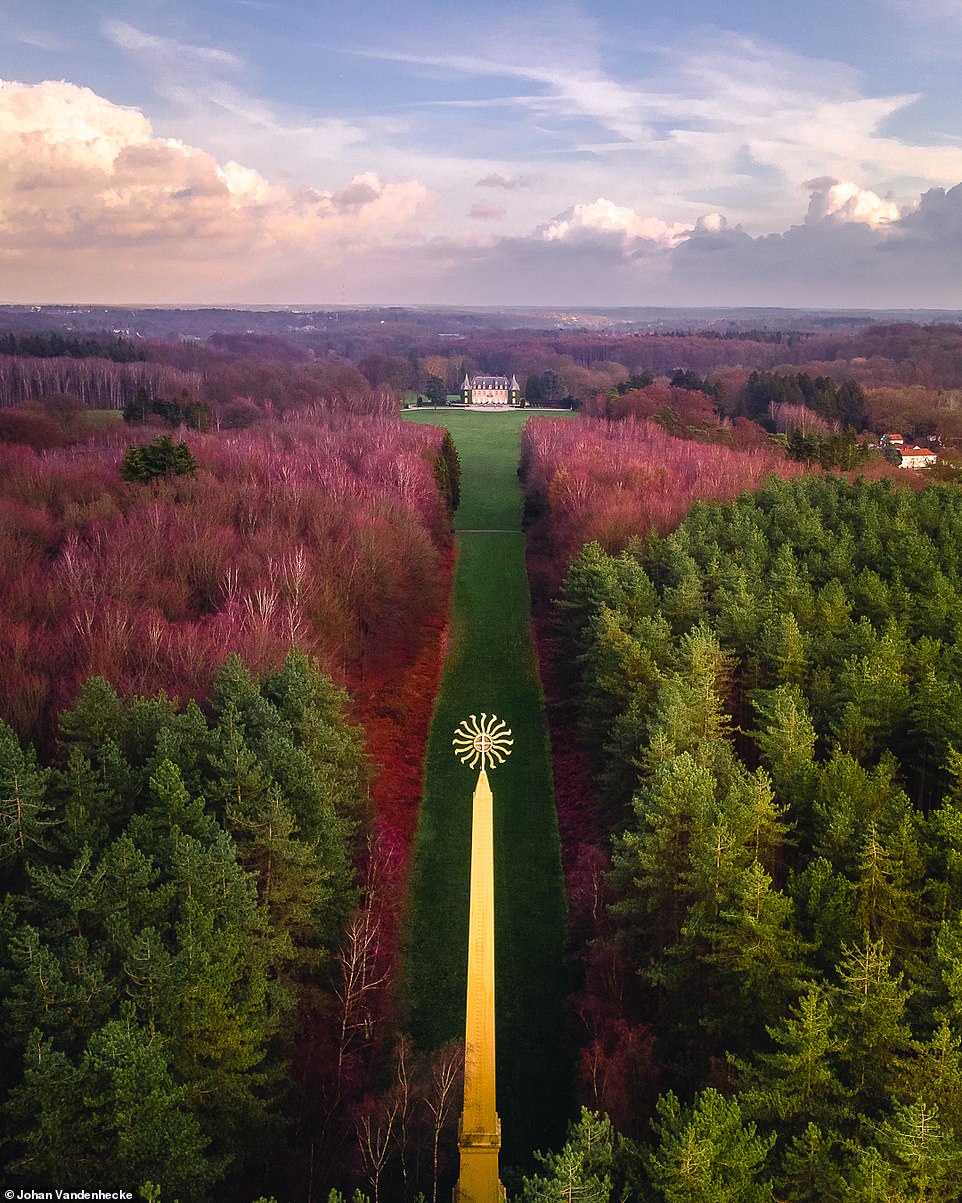 The amazing Château de La Hulpe in Belgium, which has a remarkable 118ft (36m) obelisk in its grounds, topped by a dazzling sun 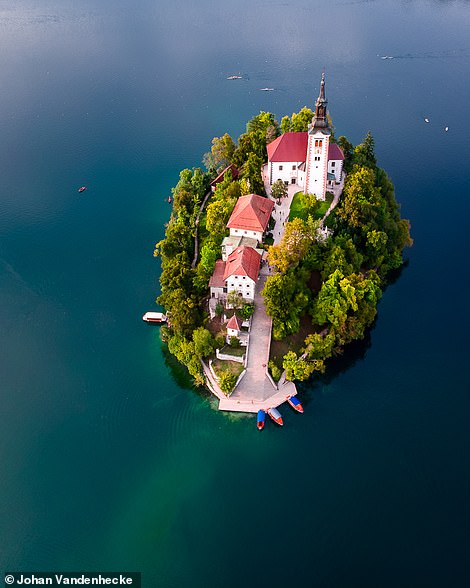 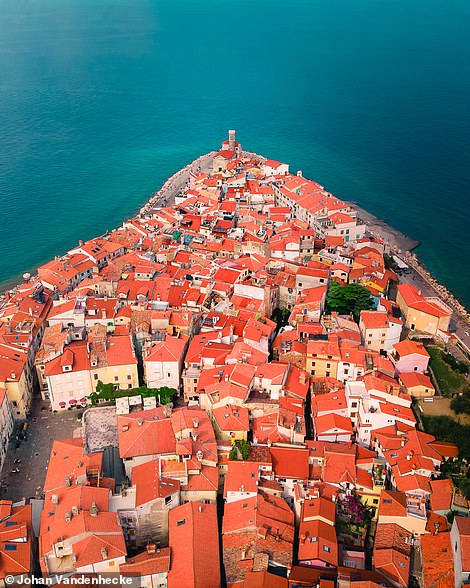 On the left is fairy-tale Bled Island, which sits in the middle of Slovenia’s Lake Bled. Its most prominent feature is the 17th-century Gothic church. On the right is an aerial view of Piran, a beautiful coastal town in Slovenia. Johan said that all the streets are tiny and cobbled

Keen drone snappers can learn much more from Johan, of course, by signing up to his Drone Adventurer Masterclass.

He said: ‘I want to inspire my students to fuel their passion and become “Drone Adventurers”, just like me.

‘I will teach them everything I’ve learned so that they can take amazing drone photos and videos as well. So instead of wasting hours and hours on YouTube and still being in the dark, they can take this shortcut that will speed up their learning curve enormously.

‘And I will help them to focus on the fun aspect of droning, on creating cool photos and learning new things, so they stay motivated to continue.

‘I’ve set up in three modules. “The Photography Masterclass” will explain how to take that banger drone photo or cinematic video. “The Lightroom Masterclass” shows them exactly how to edit that photo in Lightroom and gets them started on their first video in Premiere Pro. “The Partnerships Masterclass” is all about using their new skills to negotiate partnerships with brands/agencies/resorts and so on, and shows them different ways to make money with drone photography. On top of that, they get access to our private Facebook group to post their homework and get direct feedback from me on their progress.

‘I’m really passionate about teaching and therefore very excited to guide these students to the level of “Drone Adventurer”. Can’t wait.’