Drug addict, 36, who fashioned a homemade sex toy with a metal ring accidentally STRANGLED his penis and testicles with it for 12 hours causing them to turn blue and swell – before it was eventually cut off with a SAW

A drug addict needed to have a metal ring cut off his genitals with an electric saw after the home-made sex toy cut off his blood supply.

The Moroccan man went to hospital after his penis and scrotum became swollen, blue and cold to the touch. He was still erect when he arrived at the hospital — 12 hours after first squeezing his genitals through the ring.

Medics at Marrakech University Hospital rushed him to surgery, where they tried using bolt cutters to remove the 0.4in (1cm) thick ring but could not break it off.

Doctors returned with a rotating saw and started to cut the ring off. They placed a sheet of metal either side to stop it cutting his flesh.

The surgeons had to pour cold water onto his skin constantly to cool the area down and prevent heat from the saw burning him.

He remained in hospital for 12 hours after the operation and his genitals eventually returned to a normal colour and size without lasting damage. 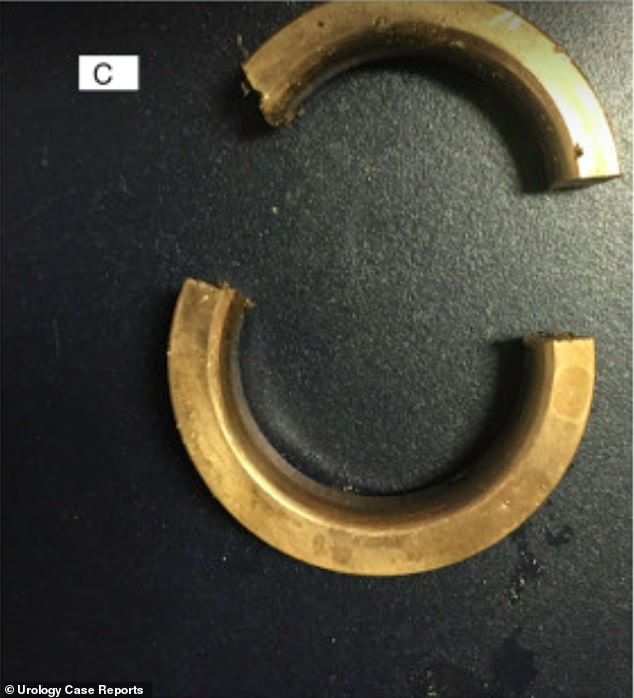 He put on the 1.6in (4cm) diameter gold ring (pictured) to sustain an erection and it caused his penis to swell up and become blue

It is not clear what drugs the man was addicted to — or whether he was high at the time of putting the ring on his genitals.

The case, published in Urology Case Reports, highlights the need to act quickly to treat penis strangulation, doctors who operated on him said.

Dr Abdel Latabi wrote: ‘Genital decompression should be as quick as possible to try to recover the external genital organs.

‘The electric saw is very useful, particularly for devices with large thickness, but it is absolutely necessary to take precautions so as not to damage the underlying tissues.’

It occurs when an object or hair cuts the blood flow off from the penis, resulting in swelling and, in the worst cases, necrosis — tissue death — and gangrene.

Medics have determined a five point scale to describe the level of damage caused by strangulation.

It ranges from low levels of swelling to tissue death and the complete loss of the end of a penis.

In some cases, doctors are forced to amputate the entire organ to stop the gangrene spreading to the rest of the body.

The most common devices used that can cause strangulation are penis rings, which are used to restrict blood flow leaving the penis and maintain erections.

If they become stuck — as with this case — doctors are forced to remove them quickly to prevent the strangulation becoming more serious.

WHAT IS PENILE STRANGULATION?

Penile strangulation is a rare but often dangerous medical emergency that occurs when an object or body part blocks the blood supply to the penis.

In the worst cases, the lack of blood flow can result in gangrene and the death of tissue — penile necrosis.

Medics have devised a grading system to indicate the severity of strangulation:

Grade 1: Edema (swelling) of the penis.

Grade 2: Injury to skin and constriction of the spongy tissues that would fill with blood during an erection. But no evidence of damage to the urethra.

Grade 4: Complete splitting of the tissue inside the penis and also the urethra.

Grade 5: Gangrene, necrosis, or complete amputation of the penis.