New CDC figures reveal another significant increase in drug overdose deaths – a bleak sign that efforts to control the epidemic are failing.

Territories that had the steepest increases in overdose deaths were Delaware, the District of Columbia, Florida, Maryland and North Dakota. And only nine states saw their rates decrease from 2015 to 2016.

The figures are consistent with the grim findings of recent reports that reflect the seriousness of America’s opioid crisis, which President Trump has deemed a ‘national emergency’.

Experts are blaming the rise on a lack of education about opioids and inaccessible treatment options.

They are also warning that the crisis is likely going to get worse before it gets better because – no matter what measures states take now to decrease drug overdose death rates – the epidemic has already taken effect.

New CDC data have revealed that the rate of overdose deaths in the US rose more than 20 percent from 2015 to 2016 despite preventative measures to bring the rate down (Source: CDC)

The CDC’s new report confirms that drug overdose deaths now kill more Americans than fatal illnesses such as influenza and pneumonia – which, combined, kill about 57,000 people – suicide, which claims around 44,000 lives annually.

Other CDC data have shown that the overdose rate for teenagers, specifically, is growing for the first time since the 2000s.

The territory that lost the most residents to drug overdoses in 2016 was Florida, where 5,199 people died from them between February 2016 and February 2017.

But the territory that saw the largest increase in overdose deaths between 2016 and 2017 was the District of Columbia, which saw a 128.8 percent increase.

However, states that saw increases like these are not necessarily doing anything wrong in their attempts to help residents who are hooked on opioids, according to Dr Cheryl Healton, Dean at NYU’s College of Global Public Health.

‘That has to do with how long they’ve had the epidemic,’ Dr Healton said.

And, conversely, ‘just because the rate went down doesn’t mean [a state is] doing things right’.

She explained that it takes time for an epidemic to run its course.

This means that even if a state’s overdose death rate is going up, it could still be making a strong effort to control it.

And one reason for a state’s overdose death rate going down could have simply been low population, Dr Healton said. 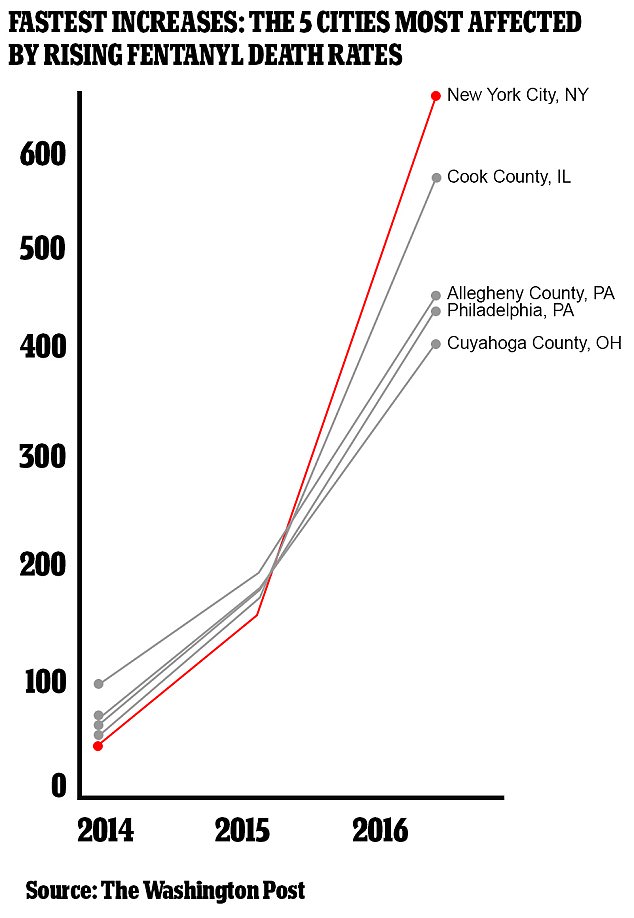 The number of fentanyl overdose deaths in America’s largest cities rapidly increased between 2014 and 2016, as the synthetic opioid’s role in the drug crisis continues to grow

WHAT IS RESPONSIBLE FOR INCREASED RATES OF OVERDOSE DEATHS IN US CITIES?

The rate of deaths in cities related to man-made narcotic fentanyl shot up 600 percent from 2014 to 2016, with the steepest increases seen in New York, Chicago, Pittsburgh, Philadelphia and Cleveland.

Fentanyl can be 50 times stronger than heroin.

Experts have said that often times people who think they are purchasing heroin are actually purchasing fentanyl, which has contributed to the rise in fentanyl-related deaths.

Fentanyl is supplied to people in the US by online orders from China as well as drug trafficking from Mexico.

The agency has also pointed out that the drug is wildly profitable for traffickers.

Traffickers can buy a kilogram of the drug in powder form from a Chinese supplier for a few thousand dollars.

From there, they can create from that one kilogram hundreds of thousands of pills and sell the counterfeit pills for millions of dollars.

Dr Healton said that the spike in deaths is, in part, a reflection of a lack of education.

‘We are doing absolutely nothing to educate the American people broadly. There needs to be mass communication,’ she said.

She added: ‘The education curve has not happened and it needs to happen.’

Dr Healton thinks that a full-fledged anti-opioid campaign needs to be initiated in the US.

Another factor that contributed to this rise is dangerous marketing tactics, she said.

Dr Healton explained that pharmaceutical companies that produce prescription painkillers such as OxyContin label opioids as non-addictive when the reality is that they are highly addictive.

This confusion about whether or not they are easy to get hooked on has led doctors to over-prescribe them because they think they are harmless.

Dentists in particular are to blame because they prescribe painkillers routinely after patients undergo minor dental procedures, Dr Healton said.

She added that doctors do this even when less-harmful and less-addictive medications exist that could also do the trick, saying: ‘We’re not utilizing other methods. They should try something else first.’

The price of painkillers produced by pharmaceutical companies has also contributed to the problem.

Dr Healton explained that after a person gets hooked on opioids – which does not take long – the doctor who prescribed the drugs to them will usually sense this.

When they do, they will stop writing prescriptions for opioids for the addicted patient, which will in turn cause the person to seek out the medications to satisfy their cravings elsewhere.

This leaves them with two options: paying at least $50 per pill for the medications they have been taking or turning to illicit versions.

Dr Healton said: ‘Providers stop prescribing. The pricing of opioids has driven people to street heroin.’ She added that heroin is usually 10 percent of the cost of prescription drugs, so it is the more attractive option.

And recent reports confirm this: the CDC’s new figures come on the heels of an analysis that showed that the rate of deaths caused by synthetic opioid fentanyl in American cities grew more than 600 percent between 2014 and 2016.

Above all people need to realize that, if they are hooked, help is available, Dr Healton said.

She explained: ‘The most important thing is availability of treatment alternatives. Treatment is effective.’