An alcohol-impaired big-game hunter assaulted his wife before shooting two NSW police officers and taking his own life, an inquest has found.

The 74-year-old, who owned 13 registered firearms with his wife, shot Leading Senior Constable Helen McMurtrie in the throat and Sergeant Mark Johnston on the side of his face with the same bullet on January 18 last year.

Known by the pseudonym ‘A’, the man had been drinking scotch that night, with tests revealing a blood alcohol level of 0.164 – more than three times the legal driving limit.

Forensic pathologist Dr Allan Cala told the inquest this would have left his judgment, co-ordination, reflexes and cognition ‘significantly impaired’.

Sen Const McMurtrie, Sgt Johnston and Probationary Constable Samantha Petty – just four weeks out of the police academy – first spoke to A’s wife, who had taken shelter at her sister’s nearby house, before engaging the man.

The woman told police her husband had put his hands around her neck, preventing her from breathing, and that she feared for her life.

She said he had mentioned a rifle and said to her something like ‘Oh you’ll get what you want’. She also thought the former plastics fabricator was going to kill himself.

In her findings released on Tuesday, Deputy State Coroner Elizabeth Ryan said there was sufficient information available to Sgt Johnston and Sen Const McMurtrie to conclude A probably was armed with a gun.

‘There was no real basis for (the officers) to be uncertain about this to the degree they apparently were,’ she said. 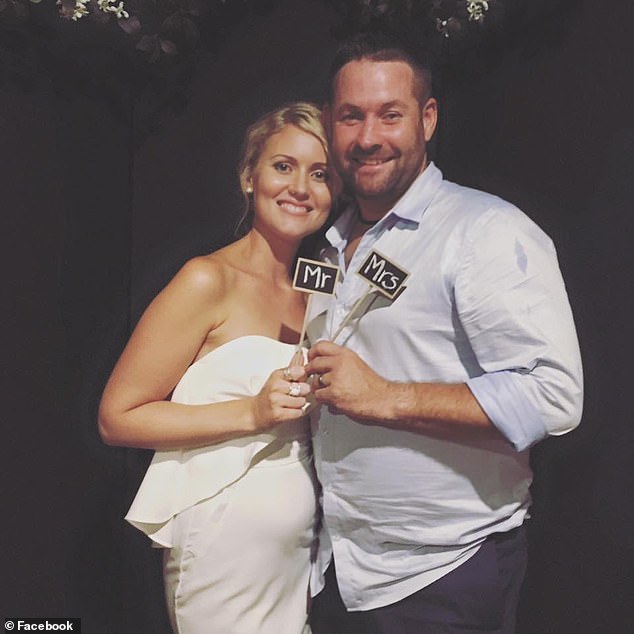 ‘The very unfortunate consequence was that each underestimated the degree of risk to themselves in approaching A as they did.’

Sen Const McMurtrie approached the house and called out to A, who did not respond. After edging closer, the three officers saw A, sitting on his verandah, loading his rifle.

Pistols drawn, Sgt Johnston told his colleagues to back out of the property, which they did before Sen Const McMurtrie noticed and yelled at A’s sister-in-law, parked in a car opposite the property.

The 74-year-old man then fired a round, with the bullet ricocheting off the gravel driveway and hitting both officers, before shooting himself.

Sen Const McMurtrie was seriously injured and was placed in an induced coma at Gold Coast Hospital.

Pieces of shrapnel remain in her neck and cannot be removed ‘without unacceptable risk’, the inquest heard. She was medically discharged from the NSW Police Force this year.

A large bullet fragment entered Sgt Johnston’s left cheek and struck his jawbone. He underwent surgery, was off work for 12 weeks and has a 10 centimetre scar on his cheek.

Ms Ryan said while there were flaws in the risk assessment and plan adopted by police, there was ‘no evidence’ a different approach would have prevented A’s death.

‘The situation facing the police officers that night was volatile with high potential to escalate in unpredictable ways,’ she said in her findings.

Ms Ryan concluded there was no basis to make any recommendations arising from A’s death.