A drunken Grenadier Guardsman punched a military policeman on the nose while brawling outside a pub following the annual Army vs Navy rugby match.

Wimbledon Magistrates’ Court heard Lance Corporal James Porter, 22, had been drinking since the morning of the clash at Twickenham earlier this month, which was attended by 80,000 service personnel.

Porter then went to The Timberyard pub nearby after the match – won 27-11 by the Army –  and became involved in fight that was broken up by military police who were on duty to keep the peace around the west London stadium.

Local residents have long campaigned for the fixture to be moved due to ‘excessive drunken rowdy behaviour’, vomiting and urinating in nearby streets and spectators ‘passing out in the street’.

Lance Corporal David Osbourne pulled the pair apart only for Porter to punch him in the face when he refused to calm down.

Porter admitted assault and Magistrate Barry Wareing told him: ‘Undoubtedly this was not your finest hour and it is very unfortunate that it occurred in and around Twickenham stadium when the Army versus Navy match was going on.’

Grenadier Guardsman Lance Corporal James Porter, 22, pictured, punched Lance Corporal David Osbourne when the military police officer tried to break up a fight he was involved in at a pub near Twickenham following the annual Army vs Navy rugby match

‘They pulled the two males apart, but one of them, this defendant, refused to calm down and continued trying to tussle with the other male.’

The court heard Lance Corporal Osborne told police: ‘The next thing the male punched me on the nose and I grabbed the top half of him and put him to the ground.’

Porter, who has served all over the world, including Iraq, Kenya and the Falkland Islands, was quickly arrested by Met police officers.

‘The defendant told officers he had been drinking since 11am and had consumed alcohol throughout the day,’ added Ms McCabe.

‘He said he was having a tiff and tried to push a friend away and the next thing he knew he was on the floor surrounded by the police.’

Porter claimed in his police interview he ‘may have lashed out in self-defence’.

The victim suffered reddening to his nose and bruising to his hand.

Porter’s lawyer James Preedy told the court: ‘He [Porter] has just got back from seven months in Iraq and is a young man of good character with no convictions.

‘This conviction will have major disciplinary consequences for him in the Army and there will be a promotional ban for him and he will be punished.

‘He does have a memory lapse regarding the incident, which was at the Army versus Navy rugby match, which is notorious for drinking.

‘Some can hold their drink better than others and on this day Mr Porter did not hold his drink well. 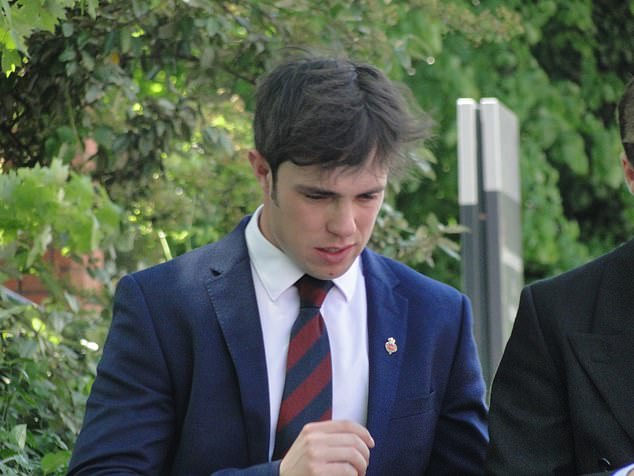 Porter, pictured outside Wimbledon Magistrates’ Court, admitted assault and was handed a conditional discharge after the panel was told he was a ‘dedicated and disciplined soldier’

‘He is very remorseful and says it was an argument with his friend that got his blood flowing and he got anxious at the time.’

Porter’s captain attended the hearing and described the defendant as a ‘dedicated’ soldier, who is ‘disciplined and focused.’

Porter was conditionally discharged for two years and ordered to pay a £20 victim surcharge.