Drunken feud over a $10,000 bet that the Earth is FLAT led to a man threatening to kill his friend

Drunken $10,000 bet between two friends over whether the Earth is flat escalates into a bitter feud – as one threatens to KILL the other with a crossbow

A drunken $10,000 bet between two friends over whether or not the Earth is flat has escalated into a bitter feud and a death threat.

Jamie Mathew Sutherland, 36, and Louie Lanz were out drinking wine and eating oysters at a restaurant in Queenstown, New Zealand in late 2017 when they started discussing the shape of the Earth.

Mr Lanz wagered $10,000 that the planet was flat, and after Mr Sutherland agreed to take the bet and the pair shook hands, Mr Sutherland demanded payment.

The pair bumped into each other a year later, and Mr Sutherland threatened to grab his crossbow and shoot Mr Lanz if he wasn’t paid, Stuff reported.

Mr Lanz said he would bet his friend $10,000 that the Earth was flat and after they agreed and shook hands, Mr Sutherland said he was owed the money (stock image)

After the pair made the bet, they were on their first drink but Mr Sutherland kept hounding Mr Lanz for the money as the night went on.

Mr Lanz said he didn’t hear anything about the bet from Mr Sutherland until he ran into him sometime later.

‘I told him many times that it was a joke. He just didn’t take it that way,’ Mr Lanz said in court documents.

The pair ran into each other again on February 14, 2019 but this time, Mr Sutherland threatened to kill Mr Lanz and his father.

‘He said, ”if you don’t pay it I will get a crossbow, I’ll shoot you and your father. I’ll put you in the [car] trunk and they’ll never see you again”,’ Mr Lanz said.

Mr Sutherland continued to threaten Mr Lanz and his father, who asked him to contact the police. 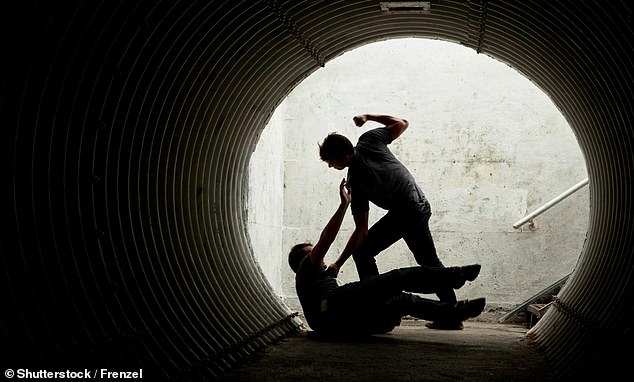 Mr Lanz believed Mr Sutherland was desperate for money and did not believe he would shoot him.

He did not want the court to convict Mr Sutherland but hoped the ordeal taught him a lesson.

‘I haven’t seen Jamie since. I hope he’s learned his lesson to stay away from us. I hope he’s doing better and we can all move on,’ Mr Lanz said.

Mr Sutherland has since apologised to Mr Lanz and is no longer demanding the $10,000.

The charges against Mr Sutherland were dismissed by a judge when he appeared in Queenstown District Court on Tuesday.