This is the bizarre moment that a drunken passenger tells a policeman, ‘I love you’ as he is escorted off a flight at London Heathrow for refusing to leave the plane.

The strange stand-off between the drunk man and police was featured on ITV series Heathrow: Britain’s Busiest Airport, last night.

The man had got into his confused and unsteady state after knocking back too many in-flight drinks and then refusing to get off the plane when it landed at Britain’s biggest airport. In the footage, officers are seen offering the man a wheelchair as he is escorted off the plane.

Rather than accept the offer, the swaying man makes his own way off the aircraft and is then seen accepting a helping hand from an officer who steadies his arm.

The man then stops and turns to the officer before saying: ‘I love you.’

The polite officer replies, ‘you’re very kind’ and they then continue into the terminal, with another policeman holding his other arm.

The man was then escorted to customs where staff were waiting with his confiscated passport.

An official on the programme explained as the man was getting off the plane that difficult passengers sometimes leave the airport in the back of a police van if their behaviour does not improve.

However, the show’s narrator said that the man’s friendly state meant that he would leave the airport like everyone else, through immigration checks. 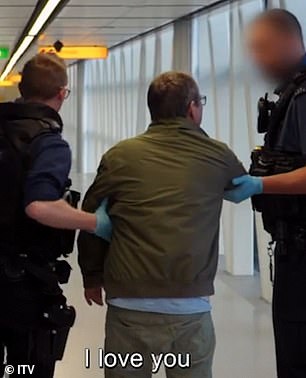 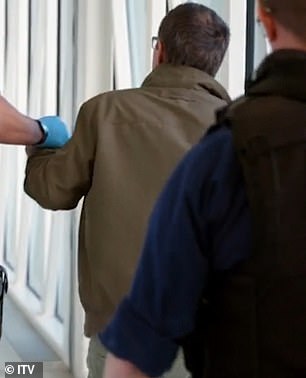 After making his way off the plane, he turns to one of the officers and says, ‘I love you’