Given the Emirati way of things, it was perhaps inevitable that the Ajman nature reserve would be next to a golf course.

We kayaked up a creek lined with thick mangrove forests, watching as hawks circled lazily in the bright sky, dipping our hands in the cool water when the paddling got too much. It’s tough work, kayaking.

But I forgot the strains and cramps when we rounded a corner and saw hundreds of baby-pink flamingos, bobbing gently on the surface.

Oasis of calm: The beachfront at the Fairmont Hotel in Ajman, a tiny city in the United Arab Emirates

Ajman might be another city built in the desert, but not all its surprises are man-made.

Still, eventually we came to a manicured green with a little flag fluttering in the breeze, incongruous amid the flora and fauna. In deference to environmentalist Greta Thunberg, we got out of the kayaks and planted some saplings.

Ask most people to list the Emirates and they’ll give you the usual two: Abu Dhabi and Dubai, the UAE’s rich, glitzy big sisters. I say most people — and I include me. Because I didn’t know there were seven.

Some might add Sharjah, Dubai’s dry next-door neighbour. The others are more of a mystery: Ras al-Khaimah, Fujairah, Umm Al Quwain. The last one even sounds as if you made it up.

The seventh, and smallest, is Ajman, a tiny city-state just beyond Sharjah, with a population of 540,000 and an area ten times smaller than Luxembourg. Although it is only half an hour’s drive from Dubai airport, for many locals it might as well be on the moon.

‘Why would you go there?’ asks one baffled Dubai resident, as if I had suggested to a diehard Londoner that I was going on holiday to Croydon. ‘Ajman is just one of those places on the way to other places.’ 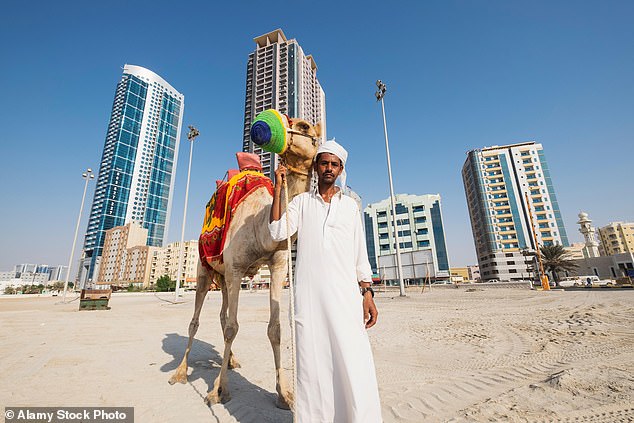 Ajman has a population of 540,000 and an area ten times smaller than Luxembourg

That is an attitude Ajman is trying to change — and squinting up at the sun back at the hotel, with a gin and tonic by my side and the Gulf lapping gently in the background, I could see why.

Ajman may lack its ritzy neighbour’s skyscrapers and £100 brunches, but it is a far quieter, more relaxed and manageable destination: a collection of hotels, restaurants and shops spread lazily down a short stretch of coastline, which offers Dubai’s attractions at a fraction of the price.

You can see why it might seem remote to Dubai-ites used to getting around within a ten-minute taxi ride, but for British tourists in search of winter sunshine under seven hours away, it is tantalisingly near.

I stayed at the Fairmont, a family-friendly hotel working with Virgin Holidays. There is a large pool with a swim-up bar and a sheltered beach, as well as a spa, gym, several restaurants and a pub where you can undo all the good work you did in the gym.

The other guests were a mixture of Britons, Europeans and the occasional Russian couple, tanning to deep hues of nut-brown. Unlike in Sharjah, alcohol is legal, which did not go unnoticed. 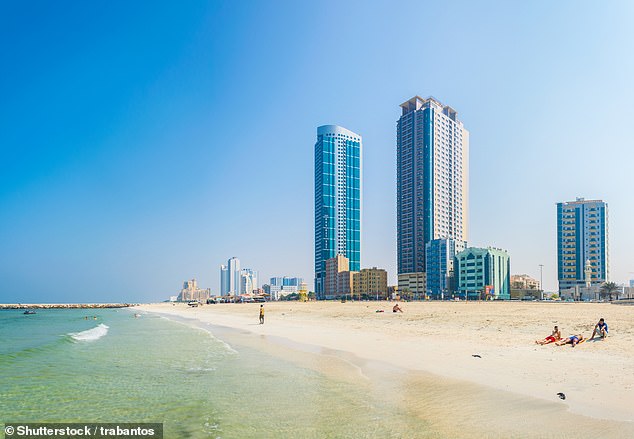 Ajman has a collection of hotels, restaurants and shops on a short stretch of coastline, pictured

With Ajman’s growing appeal, there are an increasing number of attractions. At the Ajman Stud we saw the glossy Arabians bred for racing at Meydan (the Dubai racecourse) and beyond, while at the Al Zorah watersports centre, fit young things spun and jumped on wakeboards.

The Sheikh’s old palace has been turned into an amusing little museum, with waxworks illustrating traditional ways of life. There’s even an old windcatcher, a simple but clever design in which convection draws hot air up through a high tunnel, bringing a breeze through the rooms. The royal family would sleep there during the summer, when the temperature can reach 50c.

Given that the UAE only came into existence in 1971, it’s no surprise that some of the exhibits, such as handcuffs from the 1980s, are more contemporary than what you might find in the Louvre.

Our guide tried to explain away one or two of the more old-fashioned local views. Men in the region had traditionally taken more than one wife, he said, just as a table needed more than one leg to stand upright. The group was not wholly persuaded.

He went on to explain that the best way to think of the history of the Emirates was through the tension between the Bedouins — conservative inland nomads — and the maritime, outward-looking and more cosmopolitan Arabs, who sailed up and down the coast trading pearls, spices, coffee and everything else.

This tension is never far from the surface in the Emirates, where each state must decide how much to liberalise in order to appeal to Western tourists. 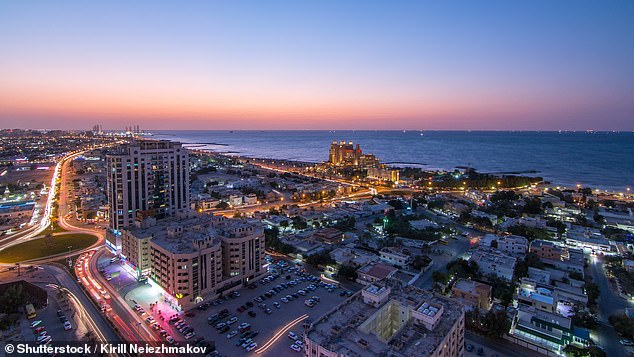 Ajman, pictured,  is just a half an hour’s drive from Dubai Airport

Ajman’s relaxed attitude is infectious. For those who can’t do without their fix of Dubai, the mad gleaming city in the sand is only 20 miles away. Recovering from its property turmoils, it has grown steadily more frenetic and chaotic in recent years.

Casino hotel groups, such as Caesar’s Palace, have started to pitch up, although gambling remains illegal, so for now they are just hotels. But the consensus seems to be that legalisation is only a matter of time.

One businessman told me the hotels have made sure there are plenty of electric sockets on the ballroom floors, should they suddenly need to install hundreds of one-armed bandits.

If you crave indoor skiing, shopping at Gucci, Fendi or Prada, the world’s tallest tower and dancing fountains, they are all available.

Then you can escape the rush and head back to plucky little Ajman, away from the chaos, and another Emirate you’ll be able to name when the pub quiz comes round.