She’s been keeping quiet about the sex of her third child, but it appeared the Duchess of Cambridge could have been dropping a subtle hint this afternoon as she stepped out in blue for the second day running.

Kate, 36, wrapped up her bump in a powder blue coat from maternity brand Seraphine, teamed with a floral dress from the same brand she wore just last week.

The Duchess wore the exact same outfit in January 2015, while pregnant with Princess Charlotte, as she officialy opened the new Kensington Aldridge Academy and Kensington Leisure Centre.

And it was the fourth time she’d worn the Seraphine

The unit is a key research facility in the university’s efforts to fast-track new treatments to patients affected by conditions like Alzheimer’s disease, Parkinson’s disease, schizophrenia and epilepsy.

A cheerful Duchess of Cambridge, 36, looked in great spirits despite the rain as she arrived at King’s College London 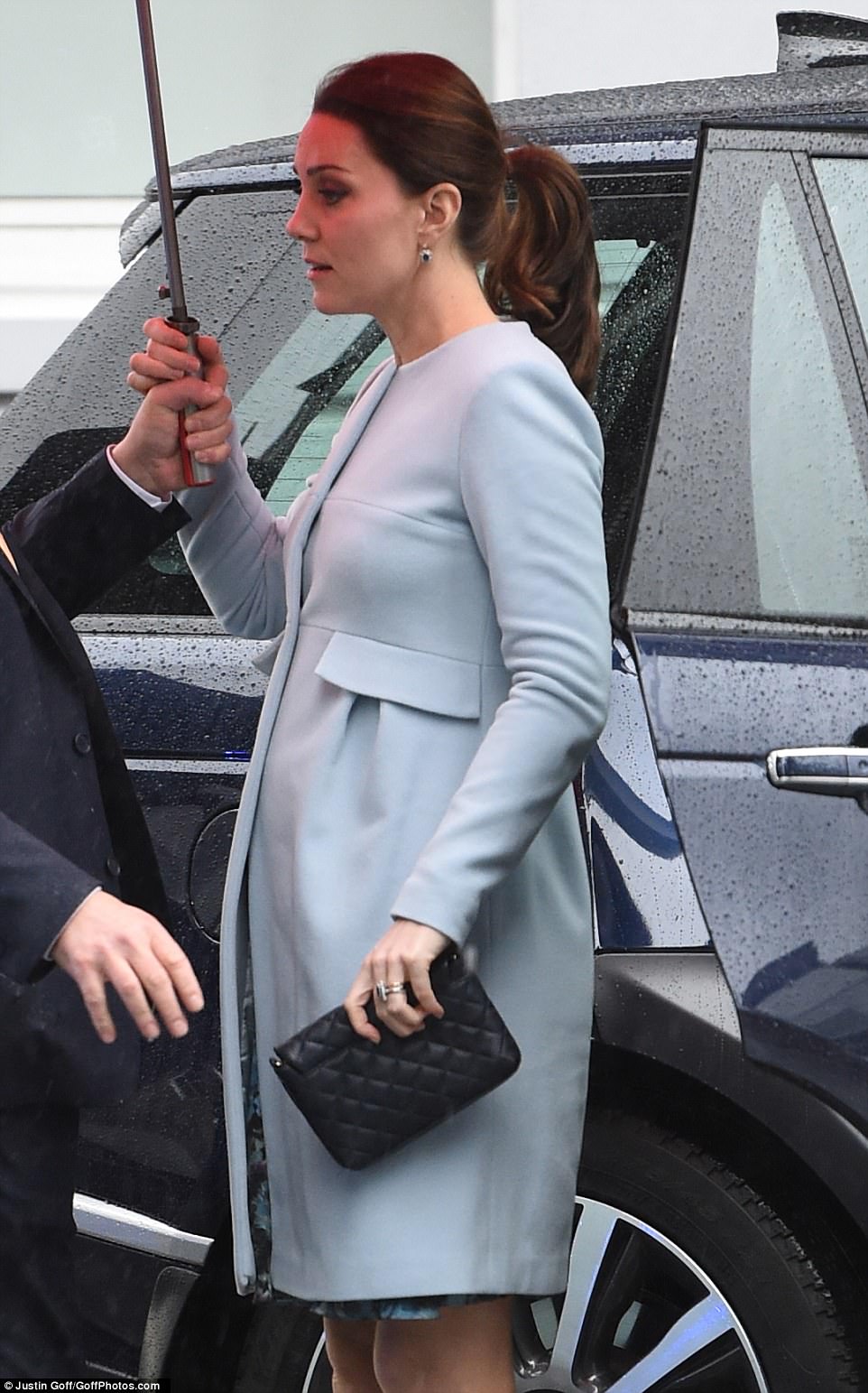 Kate, 36, wrapped up her bump in a powder blue coat from maternity brand Seraphine, as she arrived at King’s College London’s Maurice Wohl Clinical Neuroscience Institute 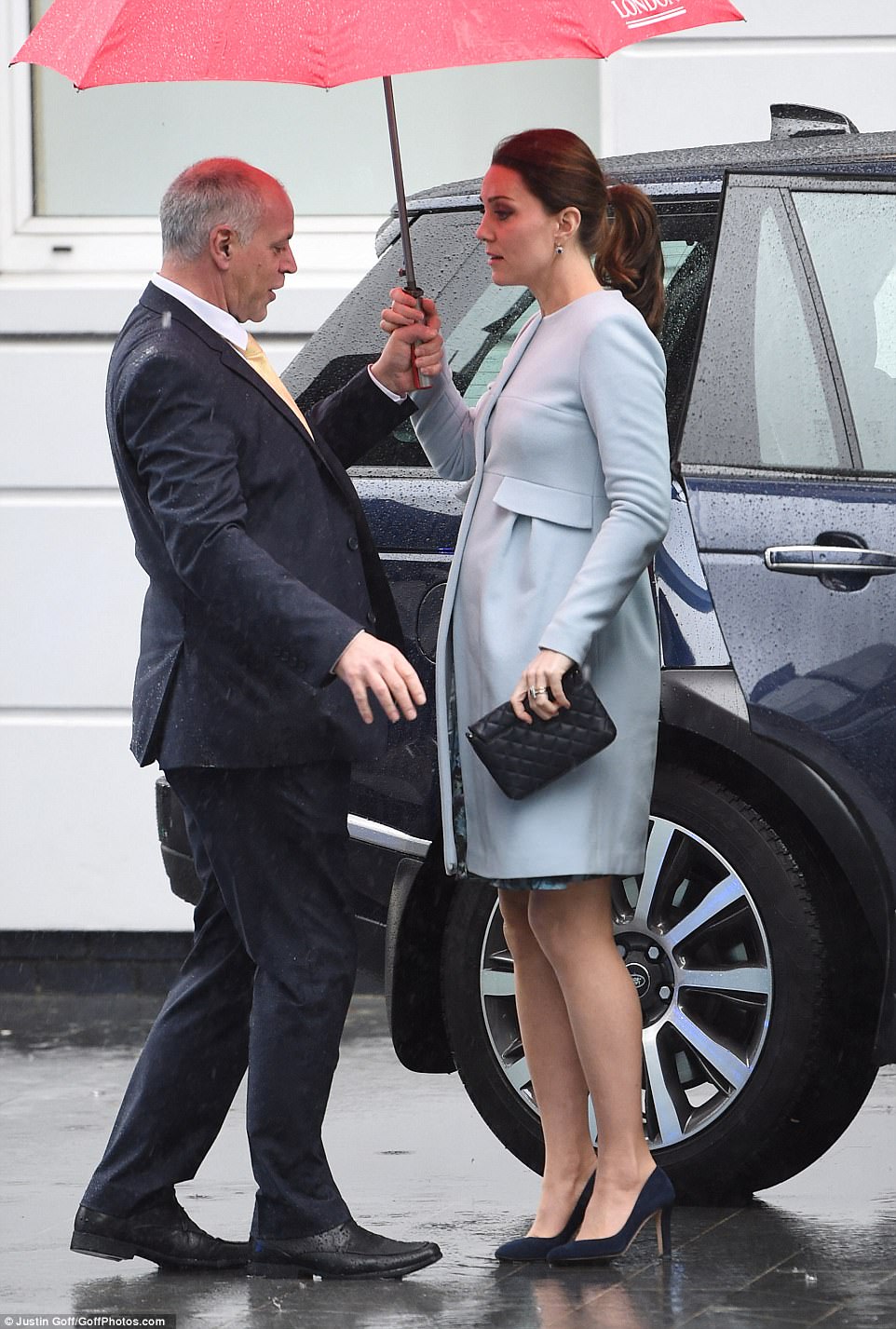 The Duchess, 36, was impeccably co-ordinated in head-to-toe shades of blue 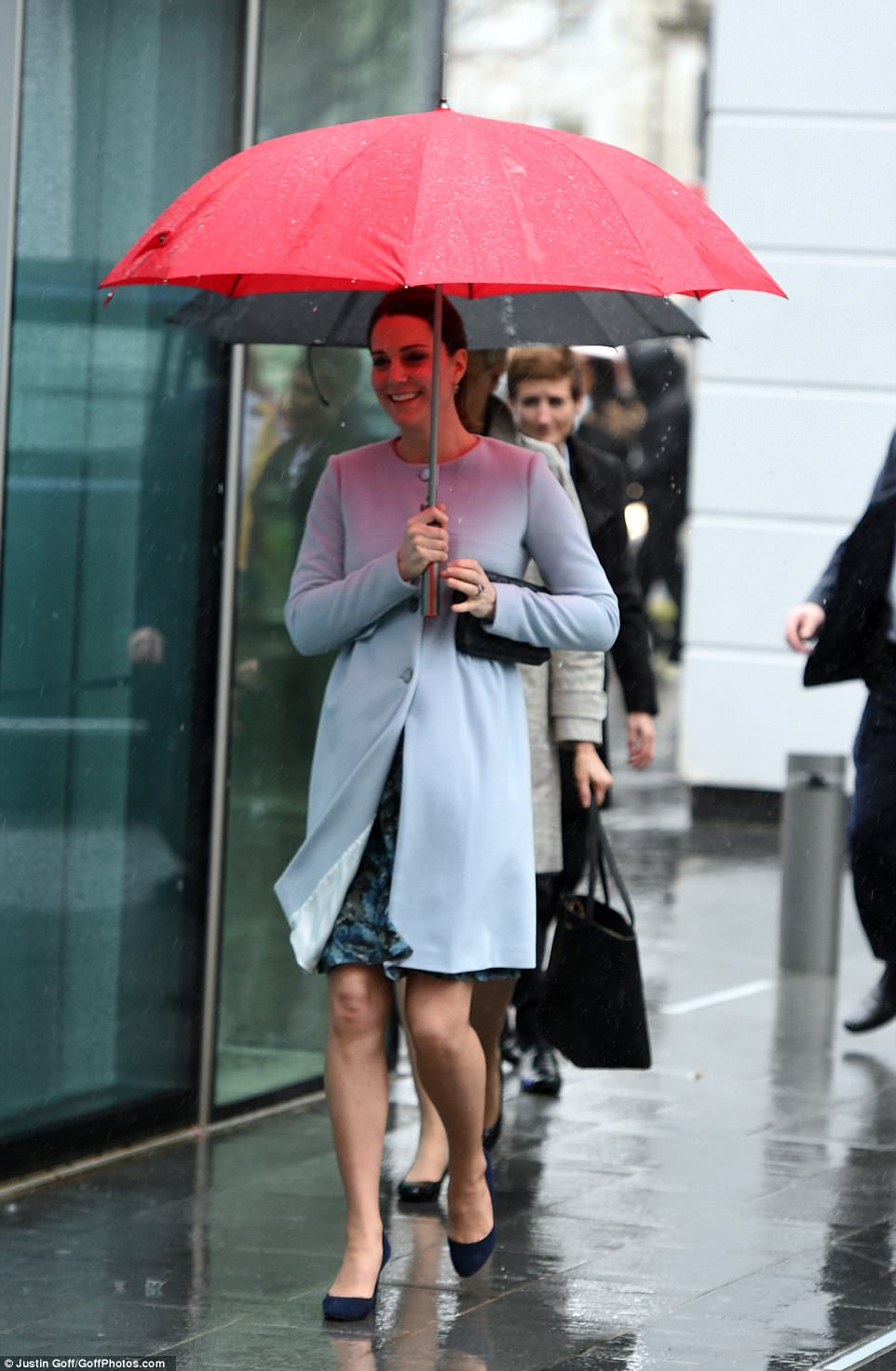 No raining on her parade! The Duchess looked cheerful despite the grim weather in London

The work undertaken by the academics at the leading teaching and research university is likely to find practical use helping to treat mothers at the Bethlem Royal Hospital.

Kate will visit a laboratory at the institute, part of King’s College London’s Institute of Psychiatry, Psychology and Neuroscience, to receive a briefing on its work in perinatal research – study surrounding the time of a child’s birth – before meeting senior academics conducting research in perinatal psychiatry.

Later today she will meet mothers being treated for mental health conditions when she visits a specialist NHS unit caring for the women alongside their children.

Kate will tour the Mother and Baby Unit at the Bethlem Royal Hospital in south-east London on Wednesday to chat to the clinicians and patients and learn more about the issues surrounding maternal mental health. 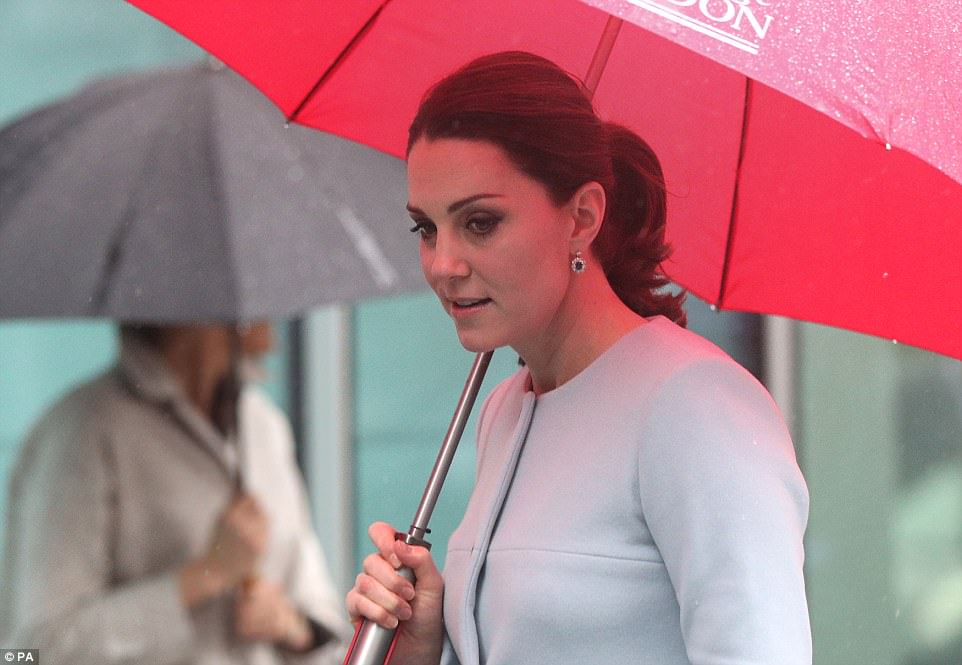 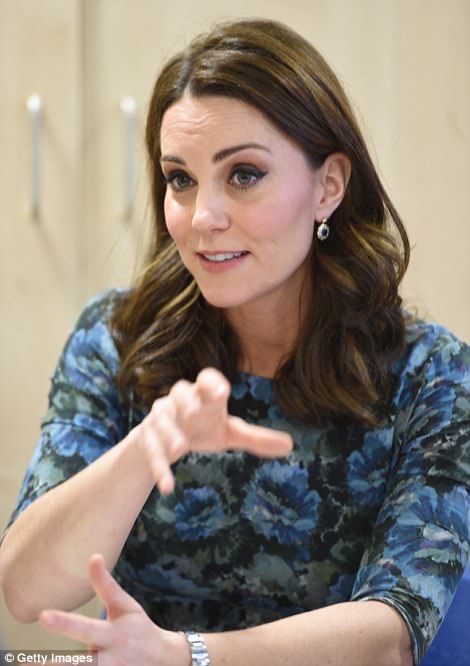 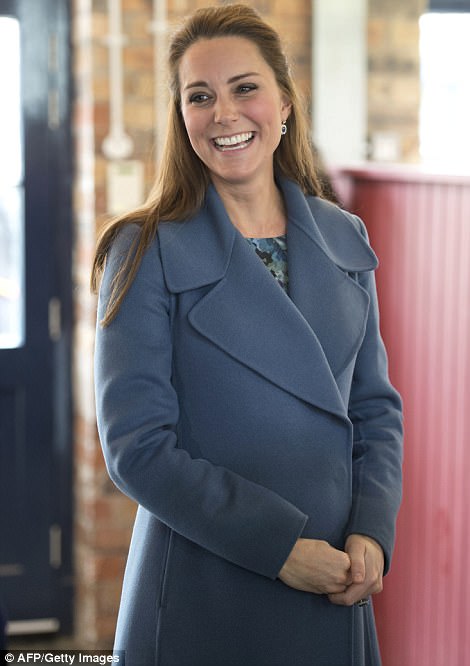 Today the Duchess opted for a Seraphine floral dress she’s worn on two previous occasions. Right: The dress could just be seen under Kate’s coat on a visit to the Emma Bridgewater pottery factory in Stoke-on-Trent, Staffordshire in February 2015

In a speech on Tuesday, Kate said she was committed to helping the “youngest and most vulnerable” when she launched the pilot of a new mental health website aimed at providing resources for primary school teachers supporting their pupils.

The Duchess is due to give birth to her third child in April and has thrown herself into royal engagements since recovering from the severe morning sickness she battled during the early stages of her pregnancy. 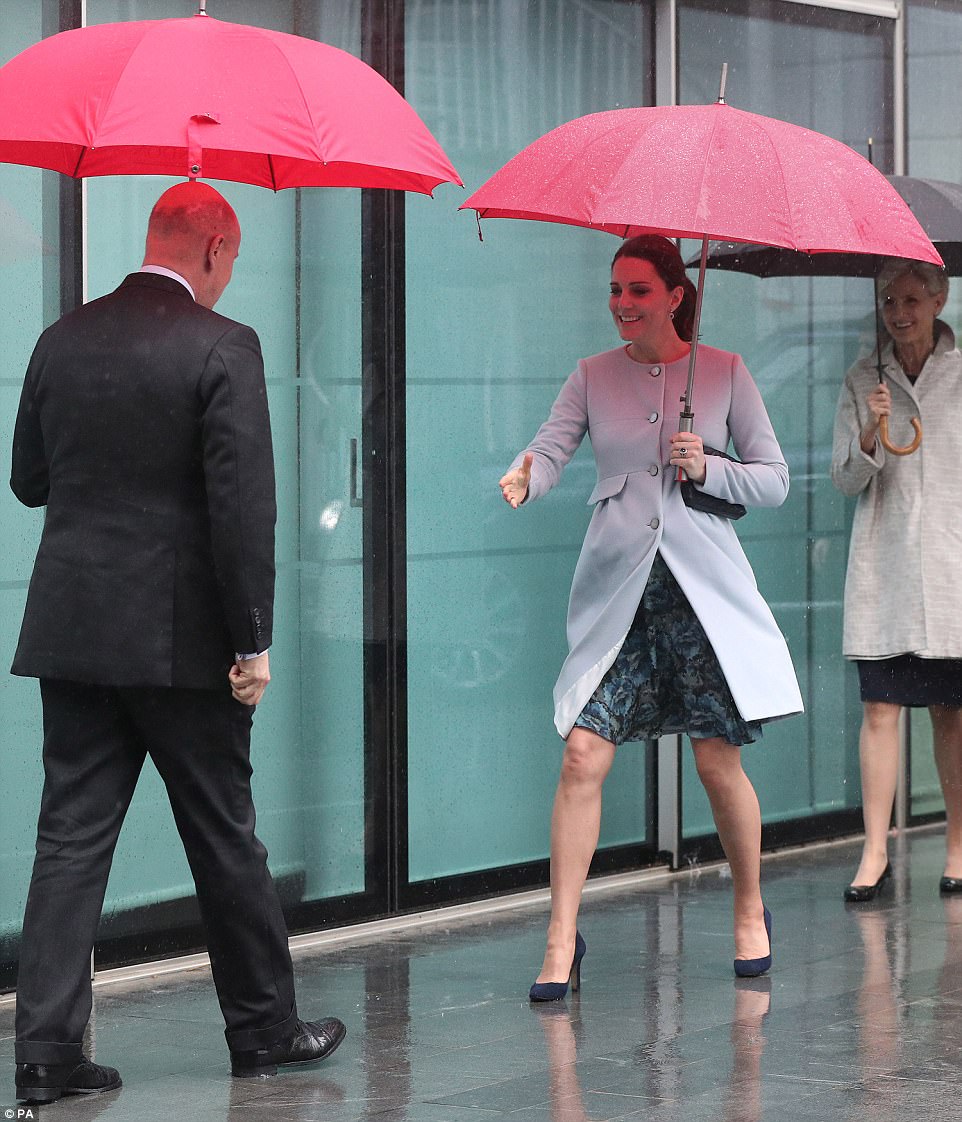 The Duchess of Cambridge arriving at the Maurice Wohl Clinical Neuroscience Institute at the Institute of Psychiatry, Psychology & Neuroscience at King’s College London in south London 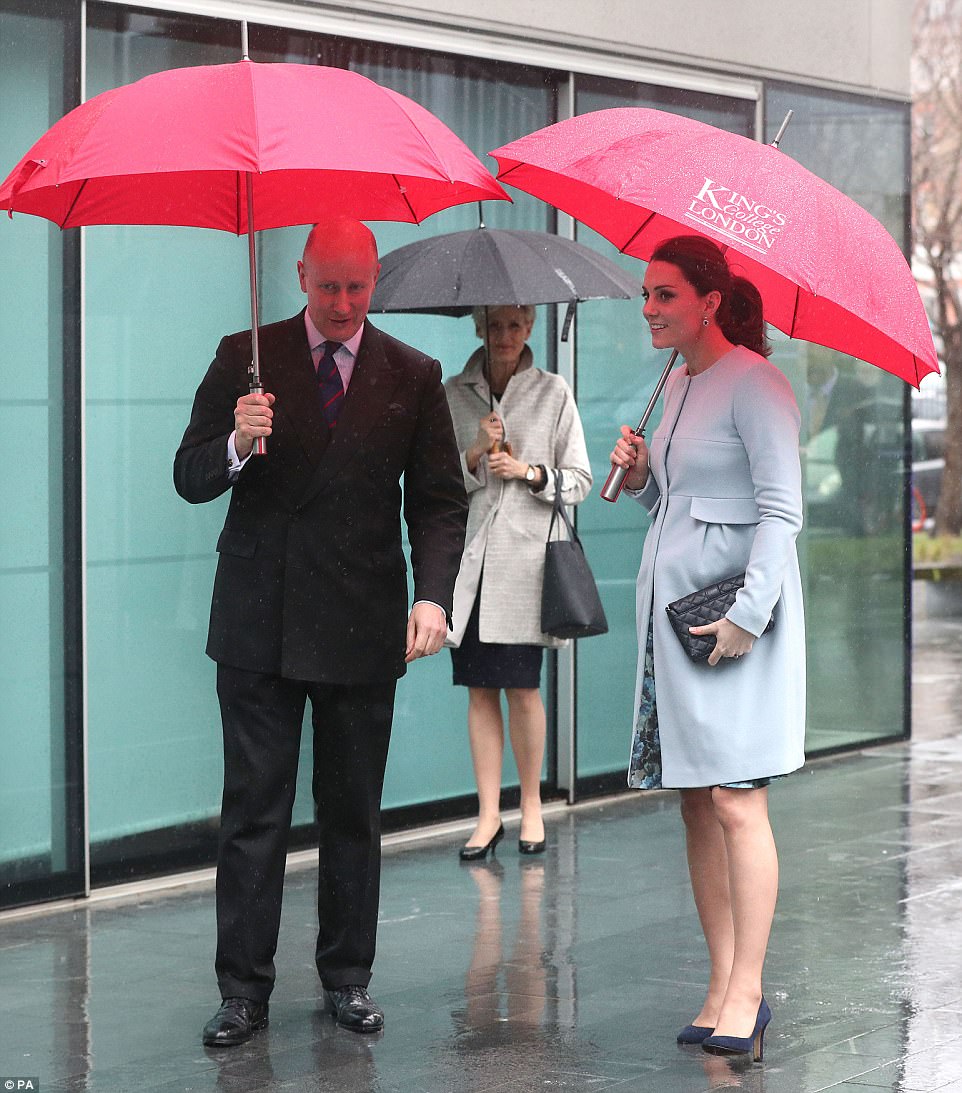 The Duchess carried her quilted clutch from Jaeger London, aptly named The Kate