The Duchess of Rutland has revealed how she felt she had been ‘punched’ when she learned of her husband’s affair in 2009 – but kept it to herself at first.

Emma Manners, 59, also said Kate, Princess of Wales, is her ‘hero’, and would be an excellent role model for her younger self as a new Duchess.

Ahead of the release of her new autobiography, The Accidental Duchess, Emma, recalled the moment she discovered her husband, David, with whom she shares five children, was having an affair, after he declined to dance with her at his 50th birthday before she then saw him laughing with another woman.

The Duchess of Rutland Emma Manners, 59, revealed the moment she realised her husband was being unfaithful ahead of the release of her new book, The Accidental Duchess 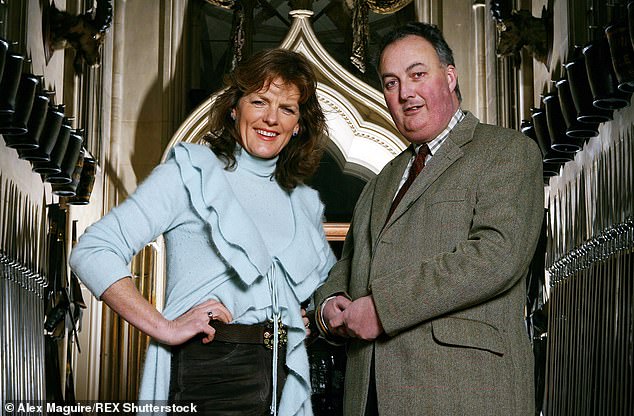 The Duke and Duchess of Rutland (pictured) married in June 1992 after meeting at a dinner party, but their marriage broke down in 2012 following David Manners’ affair. Nonetheless, the pair remain living on their Leicestershire Estate and are the best of friends

The Duchess, who is still good friends with her estranged husband, spoke about feeling as if she was ‘fighting for breath’ as it dawned on her that everything was about to change.

In an interview with the Telegraph, Ms Manners said she hardly told anyone about her discovery, claiming she is a ‘private’ person who rarely shares things with other people.

Instead of confiding in friends, she said she coped with her husband’s infidelity by smoking, drinking wine and dancing on her own to Gloria Gaynor’s I Will Survive.

Despite this, she has revealed several intimate details about her life in her new book – including that she had a breakdown in 2017 and has suffered from panic attacks for several years. She has also had five miscarriages.

Emma married the Duke of Rutland David Manners in June 1992, after they had met at a dinner party two years earlier. She has previously said her ‘biggest regret’ was the dissolution of her relationship. 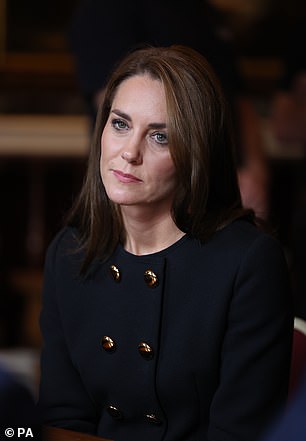 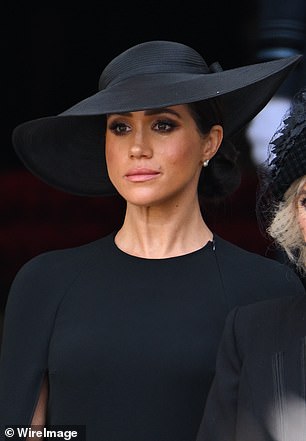 The Duchess of Rutland described Kate, Princess of Wales as her ‘hero’ – and added that, while she thought the Duke and Duchess of Sussex were ‘misguided’ at times, Meghan was ‘a good mum who makes Prince Harry happy’

The marriage broke down in 2012 after the Duke embarked on an affair with a woman who lived on his estate.

However Emma, chief executive of the Leicestershire estate, and David, who are still officially married, both continued to live at the 200-year-old stately home in separate towers and she has previously insisted the pair are still the ‘very best of friends’.

During the interview, the Duchess of Rutland was also asked what she thought of senior members of the Royal Family.

Asked about the Princess of Wales in particular, she said: ‘She is my absolute hero. I just think she’s amazing.’

She added that, when she first married the Duke, she wrote Deborah Cavendish, Duchess of Devonshire, for advice. If she was in the same position today, she would write to Kate.

When asked about the Duke and Duchess of Sussex, Emma said she believes some of their behaviour has been ‘very misguided’ – but added she thinks Meghan is ‘a good mum and makes Prince Harry happy’.

She added the Sussexes’ decision to step down as senior royals and move to the US was a ‘clean slate’ for both the couple and other members of the Royal Family.

Emma, who has become known as the ‘frugal duchess’, also revealed how, in her household, nothing is ever thrown away and she shops in budget supermarkets like Aldi and Lidl to make sure they live within their means.

Earlier this week, the Duchess appeared on ITV’s Lorraine to talk about her book – and claimed she believes there are spooky goings-on in her 356-room castle.

She told Lorraine Kelly there are ‘things you can’t explain’ in the enormous stately home.

When asked if she believed there were ghosts in the property, Emma said: ‘Well we may have, I got rid of most of them, you have to be strong with ghosts because they get away at times.’

The duchess also told Lorraine how her daughters used to play spooky pranks on guests who were staying on the estate, including Hollywood actor Hugh Grant.

She said: ‘He went to bed early one night, they knew he was terrified of ghosts, and the girls ran their nails down the door he came running out thinking it was a ghost.

‘The last laugh was on the girls as they then heard the sound of bagpipes coming up from the lift shaft in the middle of the night, they came running to find me and said “mummy there really is a ghost now” and I went to listen and no joke, that sound was coming up our lift shaft and I thought, “gosh, there’s things you can’t explain”.’